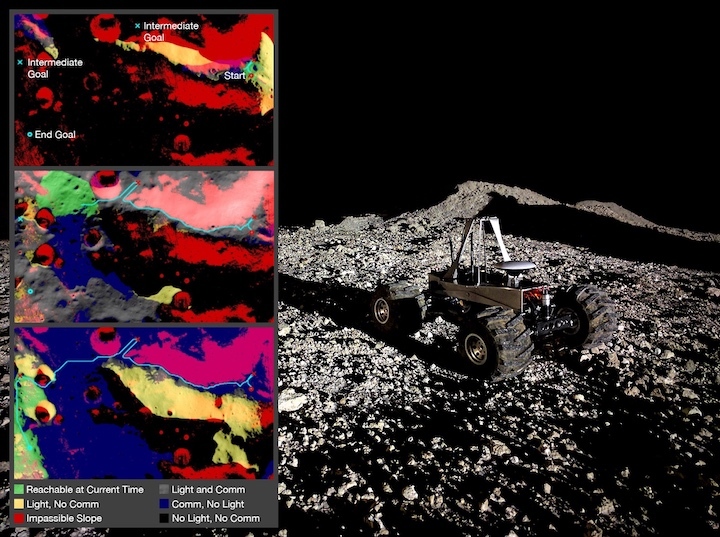 Pittsburgh, Penn., and Centennial, Colo., – Astrobotic announced today that it selected United Launch Alliance’s (ULA) Vulcan Centaur rocket in a competitive commercial procurement to launch its Peregrine lunar lander to the Moon in 2021.

“We are so excited to sign with ULA and fly Peregrine on Vulcan Centaur. This contract with ULA was the result of a highly competitive commercial process, and we are grateful to everyone involved in helping us make low-cost lunar transportation possible. When we launch the first lunar lander from American soil since Apollo, onboard the first Vulcan Centaur rocket, it will be a historic day for the country and commercial enterprise,” said Astrobotic CEO, John Thornton.

Astrobotic, the world leader in commercial delivery to the Moon, was selected by NASA’s Commercial Lunar Payload Services (CLPS) program to deliver up to 14 NASA payloads to the Moon on its Peregrine lunar lander in 2021. With this $79.5 million CLPS award, Astrobotic has now signed 16 customers for lunar delivery on its first mission.

“Our rockets have carried exploration missions to the Moon, the sun, and every planet in the solar system so it is only fitting that Vulcan Centaur’s inaugural flight will lead the return of Americans to the lunar surface,” said Tory Bruno, ULA’s president and CEO. “We could not be more excited to fly this mission for Astrobotic.”

Astrobotic’s Peregrine lunar lander will launch on a Vulcan Centaur rocket from Space Launch Complex-41 at Cape Canaveral Air Force Station in Florida. The launch of this mission will serve as the first of two certification flights required for ULA’s U.S. Air Force certification process.

“This partnership represents a true ‘whole-of-government’ approach to how our nation is leading the world in space: NASA contracted with a commercial company to land on the Moon, who then went on to contract with a commercial company for a rocket built to serve the national security space market,” said Bruno. “This highlights the power of our American system of partnership between government and industry to solve the toughest problems and the greatest of our human aspirations.”

Astrobotic Technology, Inc. is a space robotics company that seeks to make space accessible to the world. The company’s lunar lander, Peregrine, delivers payloads to the Moon for companies, governments, universities, non-profits, and individuals for $1.2 million per kilogram. Astrobotic was selected by NASA in May 2019 for a $79.5 million contract to deliver payloads to the Moon in 2021. The company also has more than 30 prior and ongoing NASA and commercial technology contracts, a commercial partnership with Airbus DS, and a corporate sponsorship with DHL. The company is also an official partner with NASA through the Lunar CATALYST Program. Astrobotic was founded in 2007 and is headquartered in Pittsburgh, PA.

With more than a century of combined heritage, ULA is the world’s most experienced and reliable launch service provider. ULA has successfully delivered more than 130 satellites to orbit that provide Earth observation capabilities, enable global communications, unlock the mysteries of our solar system, and support life-saving technology.