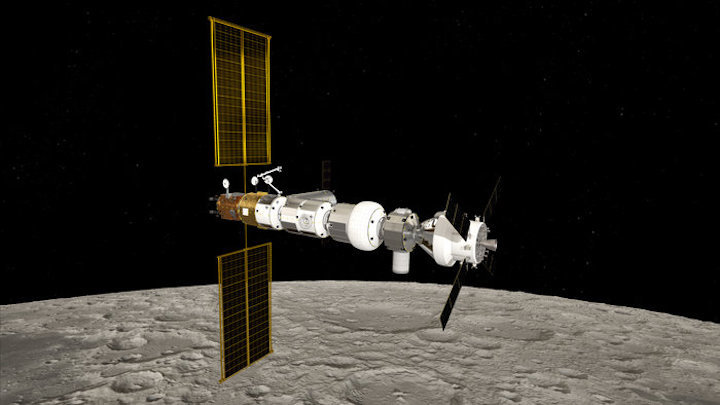 Mission planners at NASA and ESA’s Operations Centre (ESOC) have spent months debating the pros and cons of different orbits, and have now decided on the path of the lunar Gateway.

Like the International Space Station, the Gateway will be a permanent and changeable human outpost. Instead of circling our planet however, it will orbit the Moon, acting as a base for astronauts and robots exploring the lunar surface.

Like a mountain refuge, it will also provide shelter and a place to stock up on supplies for astronauts en route to more distant destinations, as well as providing a place to relay communications and a laboratory for scientific research.

Mission analysis teams at ESOC are continuing to work closely with international partners to understand how this choice of orbit affects vital aspects of the mission – including landing, rendezvous with future spacecraft and contingency scenarios needed to keep people and infrastructure safe.

The Gateway, it has recently been decided, will follow a ‘near-rectilinear halo orbit’, or NRHO.

Instead of orbiting around the Moon in a low lunar orbit like Apollo, the Gateway will follow a highly ‘eccentric’ path. At is closest, it will pass 3000 km from the lunar surface and at its furthest, 70 000 km. The orbit will actually rotate together with the moon, and as seen from the Earth will appear a little like a lunar halo. The Moon as seen from the Space Station

Orbits like this are possible because of the interplay between the Earth and Moon’s gravitational forces. As the two large bodies dance through space, a smaller object can be ‘caught’ in a variety of stable or near-stable positions in relation to the orbiting masses, also known as libration or Lagrange points.

Such locations are perfect for planning long-term missions, and to some extent dictate the design of the spacecraft, what it can carry to and from orbit, and how much energy it needs to get – and stay – there.

Travelling on the NRHO path, one revolution of the Gateway in its orbit about the Moon would take approximately seven days. This period was chosen to limit the number of eclipses, when the gateway would be shrouded by the Earth or Moon’s shadow. “If you want to stay there for several years, the near rectilinear halo orbit is slightly unstable and objects in this orbit do have a tendency of drifting away”.

To keep the Gateway in position, regular small station-keeping manoeuvres will be required.

So why this orbit? The fundamental limiting factor when moving parts from Earth, to a potential lunar base and the Moon’s surface, is energy.

“Instead we fly bits and pieces, putting parts together in space and soon on the surface of the Moon. Some parts we leave behind, some we bring back – the structures are forever evolving.”

To escape Earth’s gravitational pull requires a huge amount of energy. To then land on the Moon and not hurtle straight past it, we have to slow down by losing that same energy. We can save some of this energy by leaving parts of the spacecraft in orbit, taking only what we need to the surface of the Moon.

A permanent base in this orbit around the Moon will act as a staging post, from where parts can be left behind, picked up and assembled. After liftoff, only a moderate manoeuvre will be needed to slow a visiting spacecraft to rendezvous with the Gateway.

Forward to the Moon During the 2020s, the Gateway will be assembled and operated in the vicinity of the Moon, where it will move between different orbits and enable the most distant human space missions ever attempted.

It will offer a platform for scientific discovery in deep space and build invaluable experience for the challenges of future human missions to Mars.

“Our analysts and flight dynamics experts provide support to a full range of missions, including some of the most complex and exciting like the lunar Gateway. We can’t wait to see this ambitious international endeavour realised.”