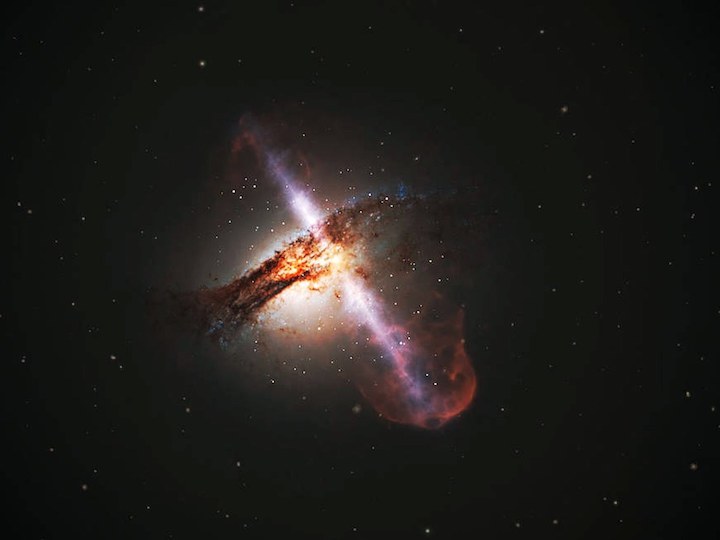 ASTRONOMERS HAVE A pretty good idea of how most black holes form: A massive star dies, and after it goes supernova, the remaining mass (if there’s enough of it) collapses under the force of its own gravity, leaving behind a black hole that’s between five and 50 times the mass of our Sun. What this tidy origin story fails to explain is where supermassive black holes, which range from 100,000 to tens of billions of times the mass of the Sun, come from. These monsters exist at the center of almost all galaxies in the universe, and some emerged only 690 million years after the Big Bang. In cosmic terms, that’s practically the blink of an eye—not nearly long enough for a star to be born, collapse into a black hole, and eat enough mass to become supermassive.

One long-standing explanation for this mystery, known as the direct-collapse theory, hypothesizes that ancient black holes somehow got big without the benefit of a supernova stage. Now a pair of researchers at Western University in Ontario, Canada—Shantanu Basu and Arpan Das—have found some of the first solid observational evidence for the theory. As they described late last month in The Astrophysical Journal Letters, they did it by looking at quasars.

Quasars are supermassive black holes that continuously suck in, or accrete, large amounts of matter; they get a special name because the stuff falling into them emits bright radiation, making them easier to observe than many other kinds of black holes. The distribution of their masses—how many are bigger, how many are smaller, and how many are in between—is the main indicator of how they formed.

After analyzing that information, Basu and Das proposed that the supermassive black holes might have arisen from a chain reaction. They can’t say exactly where the seeds of the black holes came from in the first place, but they think they know what happened next. Each time one of the nascent black holes accreted matter, it would radiate energy, which would heat up neighboring gas clouds. A hot gas cloud collapses more easily than a cold one; with each big meal, the black hole would emit more energy, heating up other gas clouds, and so on. This fits the conclusions of several other astronomers, who believe that the population of supermassive black holes increased at an exponential rate in the universe’s infancy.

But at some point, the chain reaction stopped. As more and more black holes—and stars and galaxies—were born and started radiating energy and light, the gas clouds evaporated. “The overall radiation field in the universe becomes too strong to allow such large amounts of gas to collapse directly,” Basu says. “And so the whole process comes to an end.” He and Das estimate that the chain reaction lasted about 150 million years.

The generally accepted speed limit for black hole growth is called the Eddington rate, a balance between the outward force of radiation and the inward force of gravity. This speed limit can theoretically be exceeded if the matter is collapsing fast enough; the Basu and Das model suggests black holes were accreting matter at three times the Eddington rate for as long as the chain reaction was happening. For astronomers regularly dealing with numbers in the millions, billions, and trillions, three is quite modest.

“If the numbers had turned out crazy, like you need 100 times the Eddington accretion rate, or the production period is 2 billion years, or 10 years,” Basu says, “then we’d probably have to conclude that the model is wrong.”

There are many other theories for how direct-collapse black holes could be created: Perhaps halos of dark matter formed ultramassive quasi-stars that then collapsed, or dense clusters of regular mass stars merged and then collapsed.

For Basu and Das, one strength of their model is that it doesn’t depend on how the giant seeds were created. “It’s not dependent on some person’s very specific scenario, specific chain of events happening in a certain way,” Basu says. “All this requires is that some very massive black holes did form in the early universe, and they formed in a chain reaction process, and it only lasted a brief time.”

The ability to see a supermassive black hole forming is still out of reach; existing telescopes can’t look that far back yet. But that may change in the next decade as powerful new tools come online, including the James Webb Space Telescope, the Wide Field Infrared Survey Telescope, and the Laser Interferometer Space Antenna—all of which will hover in low Earth orbit—as well as the Large Synoptic Survey Telescope, based in Chile.

In the next five or 10 years, Basu adds, as the “mountain of data” comes in, models like his and his colleague's will help astronomers interpret what they see.

Avi Loeb, one of the pioneers of direct-collapse black hole theory and the director of the Black Hole Initiative at Harvard, is especially excited for the Laser Interferometer Space Antenna. Set to launch in the 2030s, it will allow scientists to measure gravitational waves—fine ripples in the fabric of space-time—more accurately than ever before. “We have already started the era of gravitational wave astronomy with stellar mass black holes,” he says, referring to the black hole mergers detected by the ground-based Laser Interferometer Gravitational-Wave Observatory. Its space-based counterpart, Loeb anticipates, could provide a better “census” of the supermassive black hole population.

For Basu, the question of how supermassive black holes are created is “one of the big chinks in the armor” of our current understanding of the universe. The new model “is a way of making everything work according to current observations,” he says. But Das remains open to any surprises delivered by the spate of new detectors, since surprises, after all, are often how science progresses.