In 1969, Nasa astronauts landed on the Moon for the first time. Fifty years later, scientists are in training for the next mission – and in a place few would suspect.

About once every week at around 21:00, with the light of a million stars to guide them, Raúl Martínez Morales and Amanda Mandry set out to survey Mars. The couple – the former an astrophysicist, the other an obsessive stargazer – start by carefully unpacking their scientific instruments before they cross a sea of cooled lava into a realm of burning red sand dunes.

Mars, Jupiter, Saturn, the Moon – it all fascinates me

On some nights, they set up a pop-up laboratory beside a gigantic lava tube or prehistoric crater big enough to land a rocket ship inside. The drama is heightened by seeing something alien emerge from the darkness; a galactic meteor shower, perhaps, or a star they’ve never laid eyes on before.

“I’ve always been obsessed by the planets and this other world we don’t yet know since I was a boy,” said Morales, gazing in wonder at the landscape around him. “Mars, Jupiter, Saturn, the Moon – it all fascinates me.” 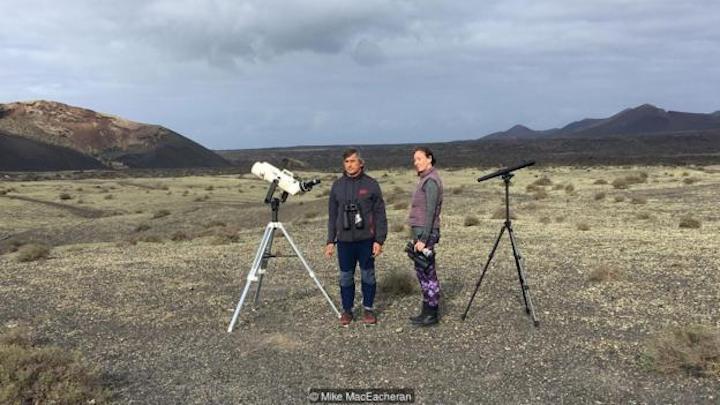 The whole scene is quite astonishingly atmospheric, but the science team isn’t on the surface of the Red Planet. Even if at times it feels they might be. In fact, they are 54.6 million kilometres from Mars in the middle of Los Volcanes Natural Park on Lanzarote in the Canary Islands.

And it is only when back on the main road beyond the reserve, when passing the Yaiza Municipal Camel Riding Centre, that the spell is broken. This is a Spanish island. Not deep space.

“Quite remarkable, isn’t it?” said Mandry, who runs the island’s Kosmos Planetarium with Morales. “In practical terms, this landscape is closer to space than anywhere else. Curiously, there are caves here that are the equivalent to ones found on the Moon and Mars. Double wow, right?” 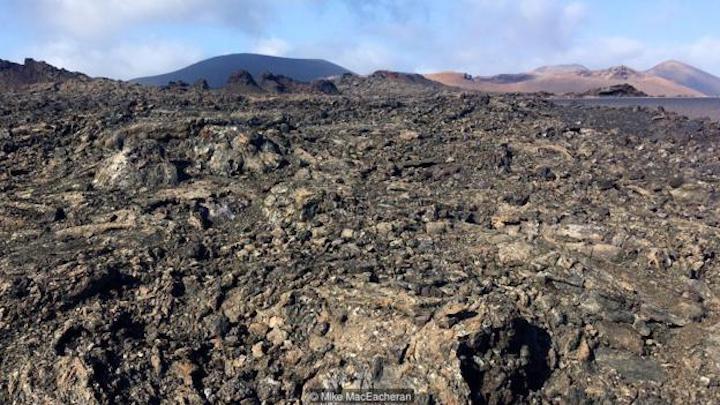 Inaugurated in 1993 as an island-wide Unesco Biosphere Reserve, Lanzarote has an uncanny geological resemblance to the Moon and Mars. So much so it has become one of the world’s most important research centres for space exploration. The National Aeronautics and Space Administration (Nasa)and the European Space Agency (ESA) use it for astronaut training and testing Mars Rovers (remote control-operated droids). Here, scientists simulate what it’s like to be on the landscapes of space and take the next step in preparing astronauts for adventures beyond Earth.

For anyone interested in space exploration, this summer is more important than most. Fifty years ago, Nasa astronauts Neil Armstrong and Buzz Aldrin became the first humans in history to walk on the surface of the Moon when Apollo 11 touched down on 20 July 1969. Much will be made of the anniversary – Armstrong’s iconic one-liner, the planting of the American flag, the half billion TV viewers, the strong sense of nostalgia. Talk will also turn to far bolder ideas and what’s next for the space agencies. And topping the agenda? To send humans back to the Moon by 2024 and then on to Mars. 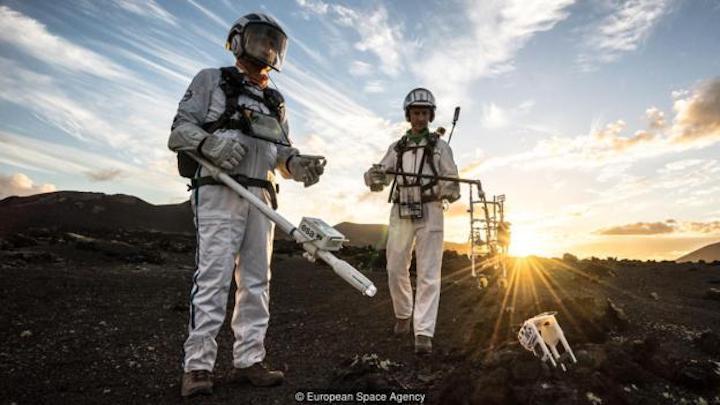 That’s where Lanzarote comes in. At times, the island’s landscape seems to defy the regular laws of physics and geography. Over a six-year period from 1730 to 1736, the island was violently shaken by multiple volcanic eruptions when vents near the Montañas del Fuego in Timanfaya National Park went ballistic, eventually covering one-quarter of the island in ash and debris blown from the centre of the Earth.

After the eruptions, the land was not dead, but newly reborn. Los Volcanes Natural Park and nearby Timanfaya National Park are famed for their lunar-like conditions. More than 100 volcanic cones are visible, and its unique mix of vast bowls, solidified magma fields, lava flows and coloured sands spreads across 172 sq km of pure otherness. There is a disorientation in the atmosphere here, the landscape giving the impression of an extra-terrestrial desert where time stands still. Even the coast has a barbaric, alien presence, the result of lava suddenly cooling down when coming into contact with the Atlantic Ocean.

This landscape is closer to space than anywhere else

One expert responsible for helping bring future space missions to reality on Lanzarote is veteran Mars project leader Loredana Bessone. Among her many responsibilities – from training astronauts to overseeing simulated mission testing of human-robot interactions – she fronts ESA’s Pangaea programme, the first step in preparing astronauts to become explorers on missions to other planets.

“In a nutshell, Lanzarote offers several realistic lunar and Martian landscapes,” said Bessone when I contacted her after visiting the Canary Islands. “It is easy to teach astronauts tasks and operations, but it is not easy to form them as field scientists. Pangaea helps astronauts from any background to become effective field geologists and geo-microbiologists in a planetary science context. And the outcomes are multiple: astronauts learn to become geologists, scientists perform investigations, and they learn to work more operationally.” 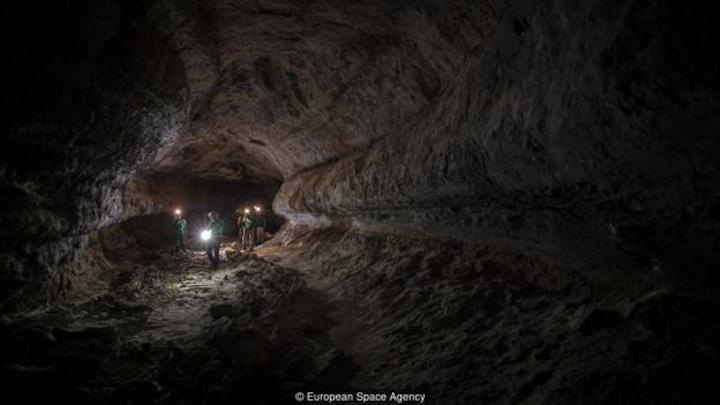 The Pangaea project has grown every year since its 2016 debut. In 2018, during Pangaea-X, the project’s 10th training camp, ESA astronauts test-drove rovers on Lanzarote, flew swarms of drones and navigated a rover through a complex, 6km-long lava tube created by a 21,000-year-old volcanic eruption.

To add to this, a dozen experiments were mobilised by 50 scientists involving four space agencies in five different locations over a week. Spacewalks were a regular thing. So too in-situ DNA analysis of microorganisms. For unsuspecting onlookers, it turned the island’s interior into a real-life movie set meshing the plotlines of Star Trek with Disney-Pixar’s Wall-E.

Those who make their living in Lanzarote’s extra-terrestrial world are attuned to such surreal drama. Talk of gravimeters, seismographs, geodetic instruments and magnetometers is the norm here. Such instruments – on display at Timanfaya National Park’s Visitor Centre – have been used by volcanologists to monitor the island’s landscape and detect events indicative of an eruption for decades. But today you’re as likely to hear stories of 3D-mapping lasers and high-tech scanners.

A geological space sortie is like a ballet: it needs to be choreographed and rehearsed to be effective

One of Pangaea’s recent lunar EVA (extravehicular activity) scenarios involved astronauts collecting rocks with geological tools derived and evolved from the Apollo mission. They communicated with scientists and documented their traverses using futuristic Electronic Field Books, the whole operation coordinated by a flight director in mission control. Another assignment involved extra-terrestrial figures in spacesuits supervising a Mars rover that was being maneuvered from a remote-control centre in Hamburg.

“Elements of such a simulation can be conducted in a backyard like Lanzarote, but it’s impossible to mimic the realism of being on a real geological planetary surface,” said Bessone, who has also trained Antarctic overwinter crews for the Concordia Station, also known as ‘White Mars’. “There are multiple obstacles in space. The difficulty of the terrain, lighting conditions and communication issues, as well as accessibility, are real. A geological space sortie is like a ballet: it needs to be choreographed and rehearsed to be effective.” 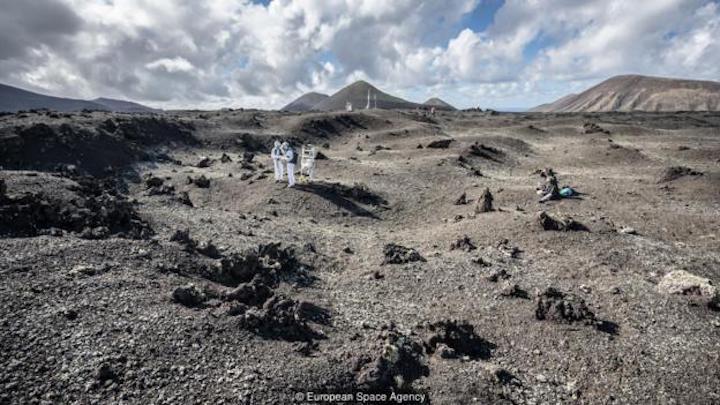 The narrative of old-school astronauts whooshing into outer space for their flag was once one of conquest. Not anymore. For today’s scientists, it’s an idea that runs in tandem with something else – a quest on behalf of all humankind to better understand how we can improve life on Earth, through developing ground-breaking science, and open up space for good. And that’s why the mission to Mars remains the ultimate end game for both Nasa and ESA.

“Testing these operations enables ESA to consider many mistakes we don’t want to repeat when we’re really in space,” Bessone said. “You do not want to find yourself there unless you know everything has been done to ensure your survival. And with Nasa’s current plans to return to the surface of the Moon in 2024, I’d say we’re just in time.”