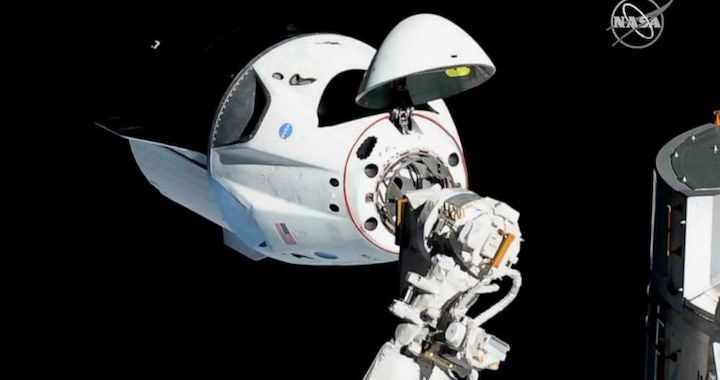 FILE - In this March 3, 2019 file photo provided by NASA, the SpaceX Crew Dragon capsule is pictured about 20 meters (66 feet) away from the International Space Station's Harmony module. SpaceX says a leaky valve caused its crew capsule to explode during a test back in April. The company announced the preliminary results of its accident investigation Monday, July 15, 2019. SpaceX's crew Dragon capsule had just returned from a successful test flight to the International Space Station and was undergoing a ground test at Cape Canaveral, Florida. (NASA via AP, File)

A leaky valve caused a SpaceX crew capsule to explode during a ground test back in April, destroying the spacecraft and dealing a blow to the company's effort to launch astronauts.

The company announced the preliminary results of its accident investigation Monday.

SpaceX's crew Dragon capsule had just returned, minus astronauts, from a successful test flight to the International Space Station and was undergoing a ground test April 20 at Cape Canaveral Air Force Station. The abort-system thrusters were 100 milliseconds away from firing, when the spacecraft exploded and was destroyed.

Hans Koenigsmann, a SpaceX vice president, said a check valve allowed a slug of liquid oxidizer to leak into the high-pressure abort system. The titanium valve ignited, leading to the blast. The check valves will be replaced with more reliable disks, according to Koenigsmann.

The valve failure was "something that we didn't expect and a great lesson for us," he said. "My emphasis is really on making sure this is safe."

Koenigsmann said the repairs to other capsules can be carried out alongside other work. But while it's not impossible, "it's getting increasingly difficult" to fly astronauts on the capsule by year's end, he told reporters. He declined to give a tentative launch date for the test flight with astronauts, adding that more issues could crop up in the coming months.

Kathy Lueders, NASA's commercial crew program manager, also was reluctant to discuss potential launch dates for SpaceX — or even Boeing. The companies had been shooting to launch astronauts to the space station by the end of the year.

Boeing has yet to conduct a test spaceflight of its Starliner capsule without anyone on board; late summer is a possibility.

"I hope it's this year" that astronaut flights resume from Cape Canaveral, Lueders said. "But we're going to fly when it's the right time and when we know that we'll be flying our crews safely."

NASA astronauts have not launched from the U.S. since the space shuttle program ended in 2011. Instead, NASA has been paying tens of millions of dollars per seat on Russian Soyuz spacecraft, to get astronauts to and from the space station.

SpaceX, meanwhile, has been launching space station supplies for NASA since 2012. The next liftoff is Sunday evening.