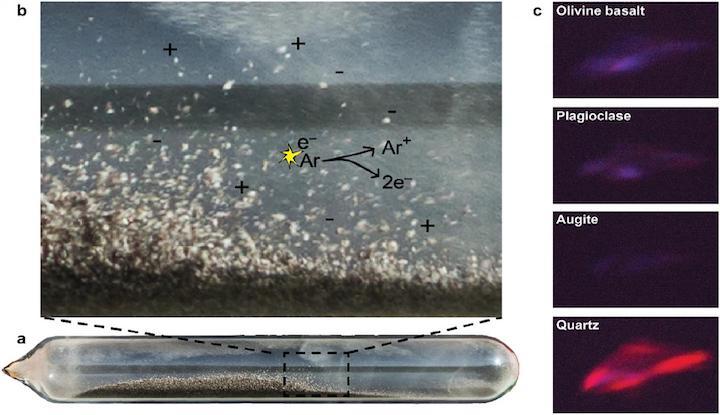 This is a simulation of wind erosion on Mars. The quartz ampoule contains particles of olivine basalt and a Mars-like atmosphere. By shaking the ampoule, the researchers simulate wind-generated saltation, ie. that the wind causes the sand grains to make short jumps over the surface. The friction of the particles creates electrical charges, and the yellow star illustrates that an argon atom has lost an electron. The small electrical charges cause the particles to glow slightly, as illustrated in the four pictures to the right.

The processes behind the release and consumption of methane on Mars have been discussed since methane was measured for the first time for approx. 15 years ago. Now, an interdisciplinary research group from Aarhus University has proposed a previously overlooked physical-chemical process that can explain methane's consumption.

For approx. 15 years ago, one could for the first time read about methane in Mars's atmosphere. This aroused great interest, also outside the scientific circles, since methane, based on our knowledge of methane on Earth, is considered a bio-signature, i.e. signs of biological activity and thus life.

In subsequent years, one could read articles that alternately reported on methane's presence and absence. This variation led to doubts about the accuracy of the first methane measurements. Recent measurements of methane in Mars' atmosphere have now shown that its dynamics is real enough and the fact that sometimes only very low concentrations can be measured is due to an unresolved mechanism that makes methane disappear from the atmosphere and not a mis-measurement.

The methane sources or the causes for its disappearance have not been identified at present. Especially the latter, the rapid disappearance of methane, lacks a plausible mechanistic explanation. The most obvious mechanism, namely the photochemical degradation of methane caused by UV radiation, cannot explain methane's rapid disappearance, which is a prerequisite for explaining the dynamics.

Aarhus researchers have just published an article in the journal Icarus in which they propose a new mechanism that can explain the removal of methane on Mars. For years, the multidisciplinary Mars group has investigated the importance of wind-driven erosion of minerals for the formation of reactive surfaces under Mars-like conditions. For this purpose, the research group has developed equipment and methods for simulating erosion on Mars in their "earthly" laboratories.

Based on Mars-analogue minerals such as basalt and plagioclase, the researchers have shown that these solids can be oxidized and gases are ionized during the erosion processes. Thus, the ionized methane reacts with the mineral surfaces and bonds to them. The research team has shown that the carbon atom, such as methyl group from methane, directly binds to the silicon atom in plagioclase, which is also a dominant component of Mars' surface material.

What the researchers see in the laboratory could also explain the loss of methane on Mars. By this mechanism, which is much more effective than photochemical processes, methane could be removed from the atmosphere within the observed time and then deposited in the Martian source soil.

Affects the possibility of life

The research group has furthermore shown that these mineral surfaces can lead to the formation of reactive chemicals such as hydrogen peroxide and oxygen radicals, which are very toxic to living organisms, incl. bacteria.

The group's results are important for assessing the possibility of life on or near Mars' surface. In a number of follow-up studies, the researchers will now examine what is going on with the bound methane, and whether the erosion process in addition to the gases in atmosphere also changes or even completely removes more complex organic material, which can either originate on Mars itself or has come to Mars as part of meteorites.

The results thus have an impact on our understanding of the preservation of organic material on Mars and thus the fundamental issue of life on Mars - inter alia in connection with the interpretation of the results of the upcoming ExoMars rover, which ESA is expected to land on Mars in 2021.