That weird, cigar-shaped outer space object that flew through our solar system a couple of years ago wasn't an alien spacecraft after all, scientists announced Monday in a new study.

"The alien spacecraft hypothesis is a fun idea, but our analysis suggests there is a whole host of natural phenomena that could explain it,” said Matthew Knight, the study lead author from the University of Maryland, in a news release.

The traveling body, named Oumuamua (Hawaiian for "scout" or "messenger"), had been the object of debate: Astronomers initially classified it as a comet, then an asteroid then back to a comet, though even that designation isn't a certainty.

There was also wild speculation that it came from an alien civilization.

"While Oumuamua's interstellar origin makes it unique, many of its other properties are perfectly consistent with objects in our own solar system," said study co-author Robert Jedicke of the University of Hawaii. In fact, Oumuamua's orbit, its path through our solar system, matches a prediction published in a scientific journal by Jedicke and his colleagues six months before Oumuamua's discovery. 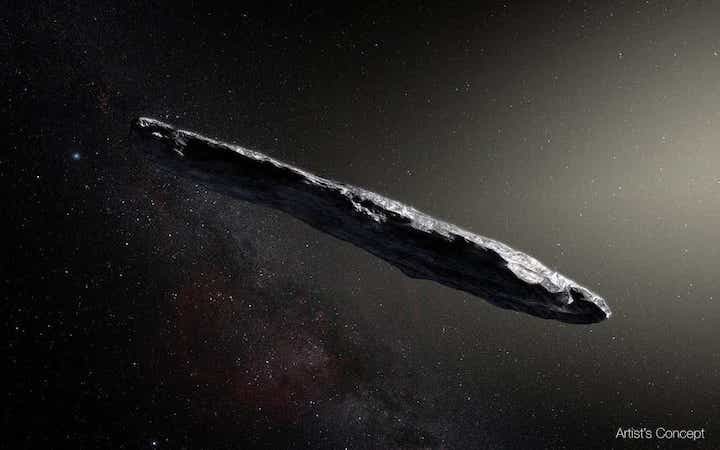 An artist's conception of the Oumuamua space rock, which sailed through our solar system in 2017.
ESO/M. Kornmesser

One theory is that the object could have been ejected by a gas giant planet orbiting another star.

The 1/4-mile long rock was first spotted in October 2017 by astronomers peering through a telescope atop Mount Haleakala in Maui, Hawaii. In the weeks after that, other ground-based telescopes around the world and space-based telescopes in orbit continued to monitor Oumuamua as it zipped through the solar system at about 85,700 mph.

Even though we know it's a natural phenomenon, "we have never seen anything like Oumuamua in our solar system," Knight said. "It’s really a mystery still," he said.

The new study was published in the peer-reviewed British journal Nature Astronomy.

Astronomie - Weird space object 'Oumuamua' was not an alien spacecraft after all, scientists say
1440 Views
Created with page4