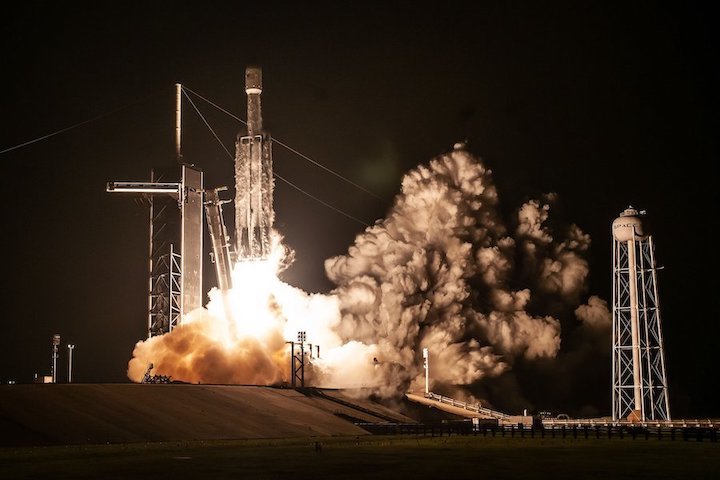 After two successful Falcon Heavy missions in less than 11 weeks, launch fans will likely have to wait until late 2020 for SpaceX’s next Falcon Heavy flight, barring a surprise mission for an unannounced customer.

One of the Air Force missions, designated AFSPC-44, is next in line to fly on a Falcon Heavy rocket. The AFSPC-44 mission is scheduled for launch in the fall of 2020, according to Col. Robert Bongiovi, director of the launch enterprise systems directorate at the Air Force’s Space and Missile Systems Center.

The Air Force has not identified the payloads on the AFSPC-44 mission, which the military awarded to SpaceX’s Falcon Heavy in February. Documents released with the military’s request for proposals suggest the AFSPC-44 launch will loft two payloads into a circular geosynchronous orbit more than 22,000 miles above the equator.

In the request for proposals, the Air Force told prospective launch providers to assume the combined mass of the two payloads is less than 8,200 pounds, or about 3.7 metric tons.

A direct injection of the AFSPC-44 satellites into geosynchronous orbit by the Falcon Heavy rocket will require a lengthy coast phase of more than five hours between upper stage engine burns. On the most recent Falcon Heavy mission, which lifted off Tuesday, the rocket’s upper stage completed four burns over three-and-a-half hours on a demonstration flight sponsored by the Air Force.

The complex orbital maneuvers were required to place the mission’s 24 satellite payloads into three distinct orbits. They also exercised the capabilities of the Falcon Heavy and its Merlin upper stage engine before the Air Force entrusts the launcher with more critical, and more expensive, operational national security payloads on future flights.

The Air Force formally certified the Falcon Heavy to be eligible to win national security launch contracts after the rocket’s inaugural flight last year. A series of in-depth technical and process reviews are now underway before the military puts a critical national security satellite on a Falcon Heavy.

“What we’re doing now is what we call the spaceflight worthiness process,” Bongiovi said in a pre-launch conference call with reporters.

The successful STP-2 mission “will move us one step closer to spaceflight worthiness for the AFSPC-44 launch in fall of 2020,” Bongiovi said before the launch.

The Falcon Heavy used on the STP-2 mission flew with reused side boosters recovered after the previous Falcon Heavy launch April 11, which delivered the commercial Arabsat 6A communications to orbit.

Officials said they will use the experience from the STP-2 mission familiarizing Air Force engineers with SpaceX’s booster recovery and reuse procedures to help certify previously-flown rocket hardware for national security missions. Before the STP-2 launch, all of the Air Force’s launches with SpaceX, to date, have used newly-built Falcon 9 boosters. 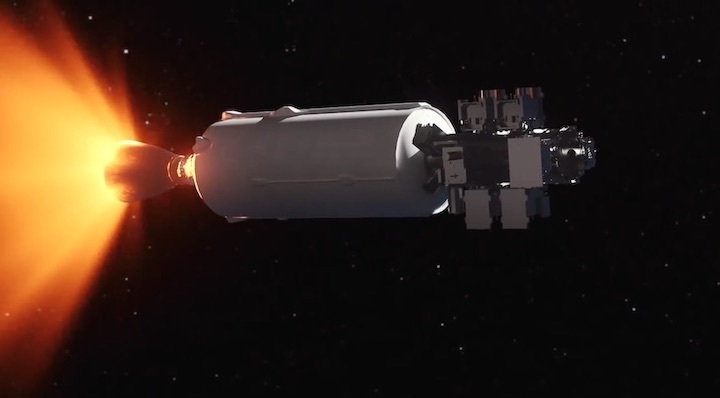 After the AFSPC-44 launch, the Air Force plans another Falcon Heavy mission with SpaceX in the spring 0f 2021, Bongiovi said. That launch, designated AFSPC-52, was previously planned to lift off by September 2020, but in a briefing with reporters earlier this month, Bongiovi twice said the AFSPC-44 mission is the Air Force’s next Falcon Heavy mission.

Like the AFSPC-44 launch, the Air Force has not identified the name or purpose of the payload to be launched on the AFSPC-52 mission.

In a draft solicitation released for the AFSPC-52 mission, the Air Force said the payload required a lift capacity of around 14,000 pounds, or 6,350 kilograms, into a geostationary transfer orbit ranging in altitude between 115 miles (185 kilometers) and 21,865 miles (35,188 kilometers), with an inclination of 27 degrees.

Viasat and Inmarsat are the two major telecommunications satellite operators with contracts or options to fly their payloads on a Falcon Heavy rocket.

SpaceX won a contract with Viasat last year to launch one of the broadband provider’s three next-generation communications satellites on a Falcon Heavy. Viasat is developing three new Boeing-built satellites, known as the ViaSat 3 fleet, to expand the company’s broadband Internet coverage around the world, with spacecraft stationed over the Americas, Europe, Africa and the Middle East, and over the Asia-Pacific region.

Viasat has booked firm launch contracts with SpaceX, United Launch Alliance and Arianespace to carry one ViaSat 3 satellite at a time toward their operating positions in geostationary orbit beginning in 2021. But the California-based broadband company has not announced the order of the ViaSat 3 launches, or which rocket will launch each satellite.

Viasat said the Falcon Heavy will place its satellite “extremely close” to its final perch in geostationary orbit, utilizing a multi-hour launch profile similar to the one planned for the AFSPC-44 mission.

Inmarsat, which owns a network of satellites for maritime and aeronautical communications, has not executed the Falcon Heavy contract option. Inmarsat’s CEO said in March that one of the company’s future satellites — the Airbus-made Inmarsat 6B spacecraft scheduled for launch in late 2021 — might be a candidate to fill the company’s Falcon Heavy contract option, according to Space News.

SpaceX has also signed up one additional customer to launch a satellite on a Falcon Heavy mission.

Contingent on final financing, the Ovzon 3 satellite will be built by Maxar’s SSL division and is expected to weigh less than a ton at launch. The relatively light weight of the Ovzon 3 spacecraft suggests it may not be dedicated launch, and could fly with another payload on the Falcon Heavy.

Several SpaceX missions have been announced only months in advance, such as the Falcon 9 launch of the U.S. Air Force’s X-37B space plane in September 2017, and the liftoff of the U.S. government’s mysterious Zuma payload in January 2018.

A Falcon 9 launch of a South Korean military communications satellite, scheduled for November from Cape Canaveral, also went unannounced until earlier this month.

Gwynne Shotwell, SpaceX’s president and chief operating officer, said in May that the company plans between 18 and 21 missions this year, excluding flights carrying SpaceX’s own Starlink broadband satellites.

Starlink launches this year are expected to fly on Falcon 9 rockets, which can deliver 60 of the small satellites to space per mission. The Falcon Heavy uses the same-size payload fairing as the Falcon 9, and the 60 Starlink satellites loaded for the network’s first dedicated launch in May were a “tight fit” inside the nose shroud, according to Elon Musk, SpaceX’s founder and CEO.

That leaves little opportunity to carry a higher number Starlink satellites, at least in their current design, on a Falcon Heavy mission.

SpaceX has completed eight missions in the first half of the year, including the one launch dedicated to the Starlink network.

Responding to a question about the next Falcon Heavy launch from Spaceflight Now, a SpaceX spokesperson referred to the company’s online manifest, which lists no Falcon Heavy missions with known launch dates before the AFSPC-44 launch in late 2020.