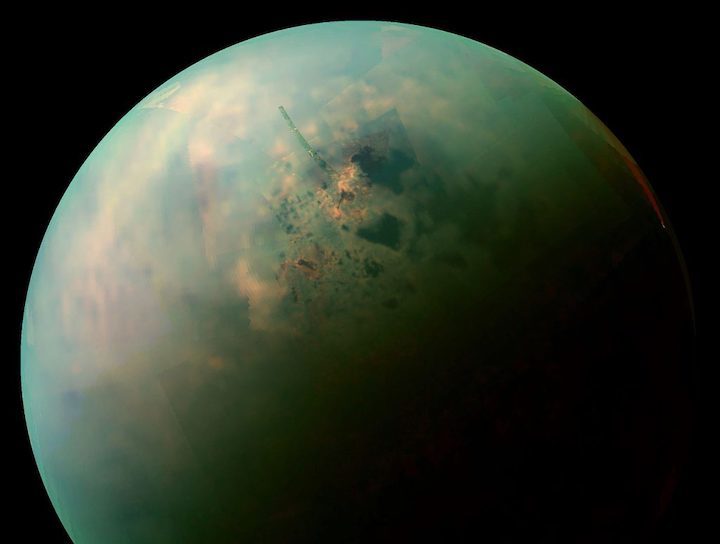 A false-color, near infrared view of Titan’s northern hemisphere collected by NASA’s Cassini spacecraft showing the moon’s seas and lakes. Orange areas near some of them may be deposits of organic evaporite minerals left behind by receding liquid hydrocarbon.
Credit: NASA / JPL-Caltech / Space Science Institute

BELLEVUE, WA –The frigid lakeshores of Saturn’s moon Titan might be encrusted with strange, unearthly minerals, according to new research being presented here.

Scientists re-creating Titan-esque conditions in their laboratory have discovered new compounds and minerals not found on Earth, including a co-crystal made of solid acetylene and butane.

Acetylene and butane exist on Earth as gases and are commonly used for welding and camp stove fuel. On Titan, with its extremely cold temperatures, acetylene and butane are solid and combine to form crystals, the new research found.

The new mineral might be responsible for the bathtub rings that are suspected to exist around Titan’s hydrocarbon lakes, according to Morgan Cable of NASA’s Jet Propulsion Laboratory at the California Institute of Technology, who will present the new researchMonday at the 2019 Astrobiology Science Conference.

Titan’s lakes are filled with liquid hydrocarbons. Previous research using images and data gathered during the Cassini mission has shown that lakes in the moon’s dry regions near the equator contain signs of evaporated material left behind, like rings on a bathtub.

To create Titan-like conditions in the laboratory, the researchers started with a custom-built cryostat, an apparatus to keep things cold. They filled the cryostat with liquid nitrogen to bring the temperature down. They then warmed the chamber slightly, so the nitrogen turned to gas, which is mostly what Titan’s atmosphere contains. Next, they threw in what abounds on Titan, methane and ethane, as well as other carbon-containing molecules, and looked for what formed.

The first things to drop out of their Titan hydrocarbon soup were benzene crystals. Benzene is perhaps best known as a component of gasoline and is a snowflake-shaped molecule made out of a hexagonal ring of carbon atoms. But Titan benzene held a surprise: The molecules rearranged themselves and allowed ethane molecules inside, creating a co-crystal.

The researchers then discovered the acetylene and butane co-crystal, which is probably a lot more common on Titan than benzene crystals, based on what’s known about the moon’s composition, Cable said.

In the moon’s cold climate, the acetylene-butane co-crystals might form rings around the moon’s lakes as the liquid hydrocarbons evaporate and the minerals drop out – in the same way that salts can form crusts on the shores of Earth’s lakes and seas, according to Cable.

To confirm whether Titan has bathtub rings of co-crystals and other, undiscovered, hydrocarbon crystals, scientists will have to wait until a spacecraft can visit the shorelines of this moon, Cable said.

“We don’t know yet if we have these bathtub rings,” Cable said. “It’s hard to see through Titan’s hazy atmosphere.”