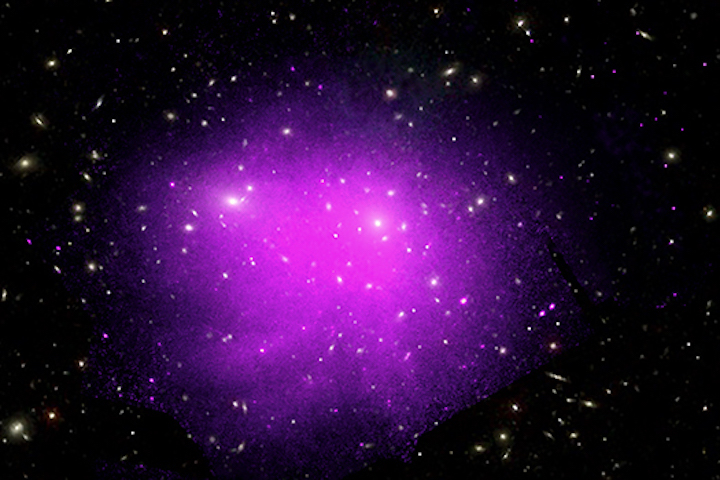 We have seen intricate patterns that milk makes in coffee and much smoother ones that honey makes when stirred with a spoon. Which of these cases best describes the behavior of the hot gas in galaxy clusters? By answering this question, a new study using NASA's Chandra X-ray Observatory has deepened our understanding of galaxy clusters, the largest structures in the Universe held together by gravity.

Galaxy clusters are comprised of three main components: individual galaxies, multimillion-degree gas that fills the space between the galaxies, and dark matter, a mysterious form of matter that is spread throughout a cluster and accounts for about 80 percent of the mass of the cluster.

A team of astronomers used a set of long Chandra observations, totaling about two weeks of observing, of the Coma galaxy cluster to probe gas properties on spatial scales comparable with a typical distance that particles travel between collisions with each other. This measurement helped them to learn about the viscosity — the technical term for the resistance to the motion of gas lumps with respect to each other — of the hot gas in Coma.

"Our finding suggests that gas viscosity in Coma is much lower than expected," said Irina Zhuravleva of the University of Chicago, who led the study. "This means that turbulence can easily develop in the hot gas in galaxy clusters on small scales, analogous to swirling motions in a coffee mug".

The hot gas in Coma glows in X-ray light observed by Chandra. The gas is known to contain about six times more mass than all of the combined galaxies in the cluster. Despite its abundance, the density of the hot gas in Coma, which radio observations have shown is permeated by a weak magnetic field, is so low that the particles do not interact with each other very often. Such a low-density, hot gas cannot be studied in a laboratory on Earth, and so scientists must rely on cosmic laboratories such as the one provided by the intergalactic gas in Coma.

"We used Chandra to probe whether the density of the gas is smooth on the smallest scales we can detect," said Eugene Churazov, a co-author from the Max Planck Institute for Astrophysics in Garching and the Space Research Institute in Moscow. "We found that it is not, suggesting that turbulence is present even on these relatively small scales and the viscosity is low."

To reach these conclusions, the team concentrated on a region away from the center of the Coma Cluster where the density of the hot gas is even lower than it is in the center. Here, the particles have to travel longer distances — about 100,000 light years on average — to interact with another particle. This distance is large enough to be probed with Chandra.

"Perhaps one of the most surprising aspects is that we were able to study physics on scales relevant to interactions between atomic particles in an object that's 320 million light years away," said co-author Alexander Schekochihin of the University of Oxford in the United Kingdom. "Such observations open a great opportunity to use galaxy clusters as laboratories to study fundamental properties of hot gas."

Why is the viscosity of Coma's hot gas so low? One explanation is the presence of small-scale irregularities in the cluster's magnetic field. These irregularities can deflect particles in the hot gas, which is composed of electrically charged particles, mostly electrons, and protons. These deflections reduce the distance a particle can move freely and, by extension, the gas viscosity.

Knowledge of the viscosity of gas in a galaxy cluster and how easily turbulence develops helps scientists understand the effects of important phenomena such as collisions and mergers with other galaxy clusters, and galaxy groups. Turbulence generated by these powerful events can act as a source of heat, preventing the hot gas in clusters from cooling to form billions of new stars.

The researchers chose the Coma cluster for this study because it has the best combination of physical properties required. The average distance between particle collisions is higher for gas with hotter temperatures and lower densities. Coma is hotter than other brightest nearby galaxy clusters and has relatively low density, unlike cool and dense cores of other bright galaxy clusters including Perseus and Virgo. This gives astronomers a chance to use the Coma cluster as a laboratory for studying plasma physics.

Future direct measurements of velocities of gas motions with the X-ray Imaging and Spectroscopy Mission (XRISM), a collaborative mission between the Japanese Exploration Agency and NASA, will provide more details on cluster dynamics, allowing us to make robust studies of many nearby galaxy clusters. XRISM is expected to launch in the early 2020s.

Astronomie - Does the Gas in Galaxy Clusters Flow Like Honey?
1525 Views
Created with page4