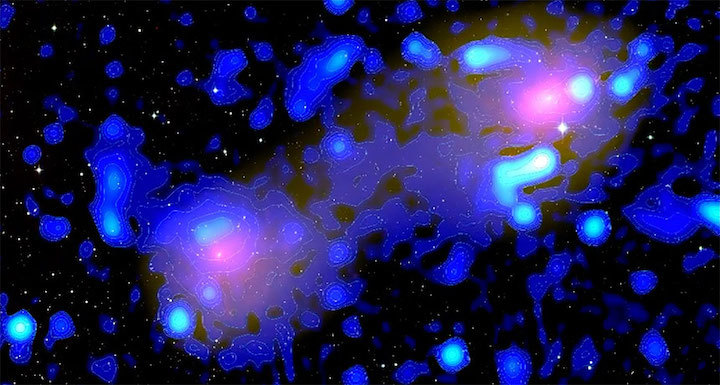 MAGNETIC CONNECTION Two distant galaxy clusters, Abell 0399 (left) and Abell 0401 (right), are connected by magnetic fields containing high-energy electrons. X-rays from the cluster cores are shown in purple, and radio emission from the magnetic bridge forms the blue-toned smear in between.

For the first time, astronomers have sighted magnetic fields between two galaxy clusters — a find that suggests some of the largest scale structures in the universe are magnetized.

The fields run between the galaxy clusters Abell 0399 and Abell 0401, which are beginning to merge about 1 billion light-years from Earth, researchers report in the June 7 Science. Radiation from electrons zipping through the magnetic fields revealed this magnetism inside the gaseous filament that connects the clusters in the cosmic web (SN: 3/8/14, p. 8). The source of those high-speed particles, however, remains a mystery.

“So far, magnetic fields have been measured in [specific] objects, like in clusters, or in galaxies,” says Nabila Aghanim, a cosmologist at the Institute for Space Astrophysics in Orsay, France, not involved in the work. In the cosmic web, filaments stretch between galaxy clusters to form a sort of celestial mesh full of cavernous voids. If magnetic fields also pervade the gaseous throughways between galactic hubs, they may have influenced the properties and evolution of gas throughout the cosmos, she says.

Researchers examined the 10-million light-year gap between Abell 0399 and Abel 0401 using the Low-Frequency Array radio telescope network, or LOFAR, based mainly in the Netherlands. Observations of the space between these galaxy clusters uncovered a faint band of radiation called synchrotron emission — a kind of illumination produced by high-speed electrons spiraling around magnetic field lines.

Computer simulations indicate that weak shock waves from the early stages of this galaxy cluster merger can’t accelerate normal electrons in the gaseous filament enough to generate the synchrotron emission observed. Instead, the filament must already have contained high-energy electrons that are being reaccelerated by merger shock waves.

“We still don’t know where this preexisting population [of electrons] comes from,” says study coauthor Federica Govoni, a radio astronomer at the Cagliari Observatory in Selargius, Italy. “They may have been ejected in the past by [nearby] galaxies or by explosions of supernovae.”

Another lingering question is whether other filaments in the cosmic web are also threaded with magnetic fields. “This is a filament that’s kind of modest, in terms of its size,” Aghanim says. She’s curious whether magnetic fields could go the distance between cosmic filaments tens of millions of light-years long.

Astronomie - In a first, magnetic fields have been spotted between two galaxy clusters The finding suggests large structures in the cosmic web are magnetized
1503 Views
Created with page4