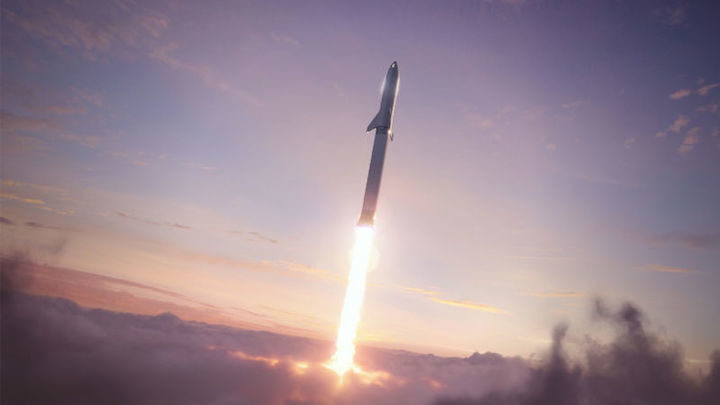 A rendering of what a Super Heavy Starship launch would look like.

Earlier this month, the principal Mars "development engineer" for SpaceX, Paul Wooster, provided an update on the company's vision for getting to the Red Planet. During his presentation at the 2019 Humans to Mars Summit in Washington, DC, Wooster said SpaceX remains on track to send humans to Mars in the "mid-2020s." He was likely referring to launch opportunities for Mars in 2024 and 2026, but he also acknowledged that much work remains to reach that point.

SpaceX plans to bring humans to Mars with a two-stage rocket: the Starship upper stage and a Super Heavy booster (the latter formerly known as the Big Falcon Rocket, or BFR). Iterative design versions of the Starship are being built at facilities in both Boca Chica, Texas, and near Cape Canaveral, Florida. SpaceX founder Elon Musk is expected to provide an update on their development in late June.

Wooster said that SpaceX is working to "minimize the number of things that we need to do in order to get that first mission to Mars." Part of that minimization involves a massive payload capacity. Starship, once refueled in low-Earth orbit, is planned to have a capacity of more than 100 tons to Mars.

This will allow SpaceX to take a "brute force" approach, which will greatly simplify the overall logistics of the first missions. For instance, this will allow for taking more consumables instead of recycling them, more equipment and spare parts, and other infrastructure, Wooster said.

Of course, there are many other variables beyond just getting to Mars that make for a successful mission. Wooster echoed Musk, who in previous talks has said the company is not as focused on other aspects of the mission, such as long-term food storage, collecting resources, and the science to be done on Mars. "SpaceX is very much a transportation company," Wooster said. Rather, SpaceX is seeking partners to help with these parts of the plan—it's just building the rocket.

How to get back

But those things beyond building the rocket are critical. One of the key elements needed to make for a more cost-effective Mars mission is in-situ resource utilization, in which crew members use resources available on Mars to reduce the complexity of the mission—essentially living off the land. This was first proposed in the Mars Direct plan outlined by Martin Marietta, as it allows for a much smaller and cheaper mission. The primary benefit accrues from making the propellant for the return journey to Earth on Mars itself, reducing the cost of the mission significantly.

This is one area in which SpaceX is especially keen to find partners. "There are a lot of important aspects in producing the propellant for this vehicle," Wooster said. The company has plans to do this on its own if it has to, but he said SpaceX would gladly allow others to assist. SpaceX is also seeking partners for critical needs such as power, habitats, science, food storage, and more. Beginning in September 2018, the company began to convene conferences to solicit advice and support in these areas.

One particular concern Paul noted is power requirements, estimated to be on the order of 1 megawatt over the course of a 500-day stay on Mars. Nuclear energy would be the preferred source for such power, but NASA is currently only developing space-rated nuclear power on the order of 10kW, which means that further development would be required to allow for close to what SpaceX needs.

Solar power is possible but would require more than 6,000 square meters of panels. SpaceX's recent launch of 60 Starlink satellites carried a lot of solar panels—enough to power the International Space Station—but that was still only 120kW. The Martian surface is also a difficult environment for solar panels; it's farther from the Sun, there are regular dust storms, day/night temperature cycles are large, and optimal pointing could be a challenge. Nonetheless, all of these issues could potentially be surmounted with the large payload capacity of Starship. 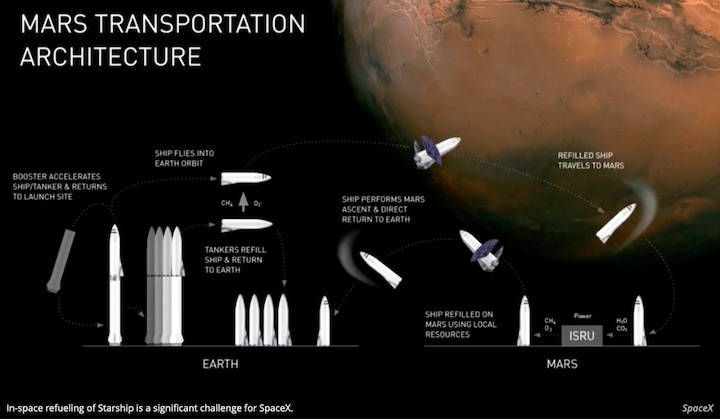 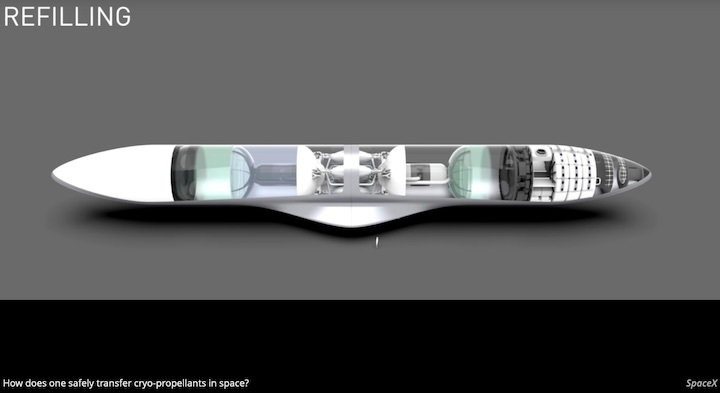 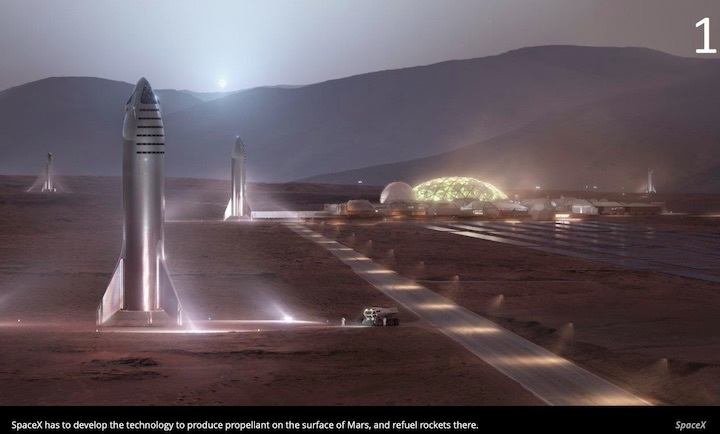 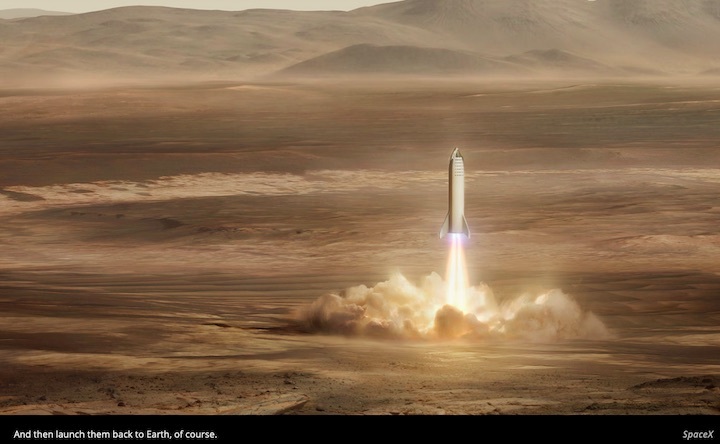 Another significant concern is orbital refueling. While this is frequently done with non-cryogenic fuels on the International Space Station, it has never been demonstrated on a large scale in space with super-chilled rocket fuel. We would need to know it worked prior to launching a mission to Mars.

Under the current mission plan, a Super Heavy rocket would launch a Mars-bound Starship to low-Earth Orbit. At that point, the spacecraft would need more fuel if it's going to get its payload all the way to the Red Planet. An estimated five Starship launches are required to refuel a single Mars-bound Starship in low-Earth orbit, and this would involve the transfer of hundreds of tons of methane and liquid oxygen. Wooster said this is one of the most difficult technology challenges that SpaceX will have to overcome.

SpaceX has outlined a plan that will send at least two cargo missions to Mars at the first opportunity. These test missions will identify resources available on Mars and potential hazards at the landing site. Provided that those missions go well, the company plans to send two more cargo missions as well as two crewed missions to Mars.

If conditions on Mars aren't what SpaceX expects in terms of resource availability, Wooster said SpaceX is considering bringing components of fuel to Mars for the return trip, likely in the form of either water or pure hydrogen. The company could also return a Starship with less than a full load of fuel. SpaceX has stated that it can return between 20 and 50 tons of payload from the surface of Mars to Earth with a fully fueled rocket, but it could do the return with less cargo and less fuel if required.

Other options include leaving a Starship in orbit, which would reduce the fuel needed. Or, as Gerry Sanders from NASA's In-Space Resource Utilization team said, a return could be accomplished by simply launching extra fuel to Mars and transferring it to a single Starship rocket.

At the summit, several NASA officials appeared to be interested in Starship's potential but felt the time is not yet right to begin seriously planning around it. Humphrey "Hoppy" Price—the Chief Engineer at NASA's robotic Mars Program at the Jet Propulsion Laboratory—noted that NASA would have spent five years waiting for Falcon Heavy to be ready if it had planned around the date SpaceX first announced it would be available. (It's worth noting that NASA's own Space Launch System rocket was originally supposed to launch in 2016 but is now likely delayed until 2021). When Starship is ready, those officials suggested, NASA will be very interested in it.

SpaceX is also working with NASA to find a site where Starship could safely land on Mars and be refueled for a return to Earth. Refueling requires the presence of water ice, which is primarily found in the higher latitudes and a high level of power. If the latter comes from the Sun, it's easier to produce at lower latitudes. A latitude between 30 and 40 degrees satisfies both criteria frequently on Mars. Safely landing Starship also requires a location relatively free of rocks and steep slopes. In addition, a thicker atmosphere provided by landing at a lower elevation would allow Starship to use the atmosphere to slow down, simplifying the landing process. 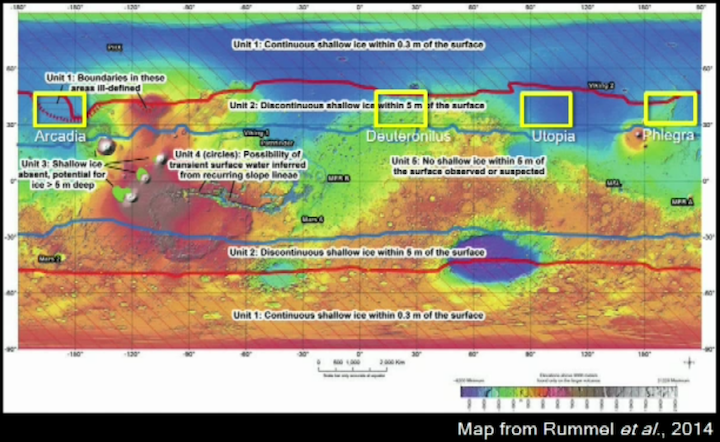 So far, NASA and SpaceX have identified four areas that meet their criteria for a safe mission to Mars: the Arcadia, Deuteronilus, Utopia, and Phlegra regions, which are in the northern hemisphere. On the map, blue and green regions are lower in elevation, making them better landing locations than the orange, red, and white areas.

It is good that SpaceX realizes that getting to Mars will require a lot of help. Equally positive is that NASA and the academic community have begun to step up and help one of the most ambitious undertakings of our times.

Raumfahrt - SpaceX beginning to tackle some of the big challenges for a Mars journey To survive on Mars, and return, SpaceX would gladly allow others to assist.
« Zum vorherigen Eintrag Zum nächsten Eintrag »
2172 Views
Created with page4