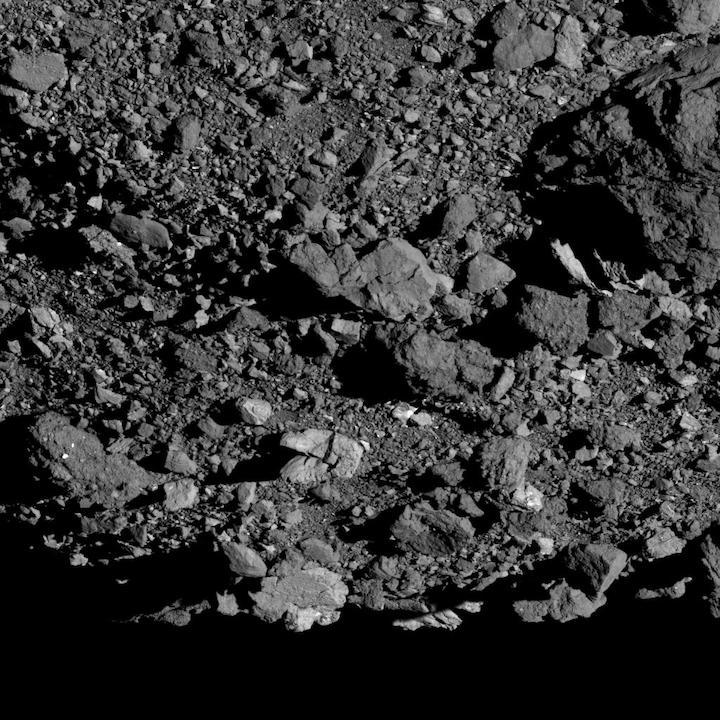 Look at all the different types of rocks in one small area near Bennu's south pole. You've got sharp rocks, fluffy-looking rocks, dark and light rocks, big and small. Over on the lower left, there are even two white rocks sitting on a dark rock. What all is going on here?

This was taken during Flyby 3 of Baseball Diamond phase from a distance of 2.2 miles (3.5 km). The pear-shaped, light-colored boulder in the lower left quadrant of the image is about 8 ft (2.4 m) wide -- the same size as a horse. 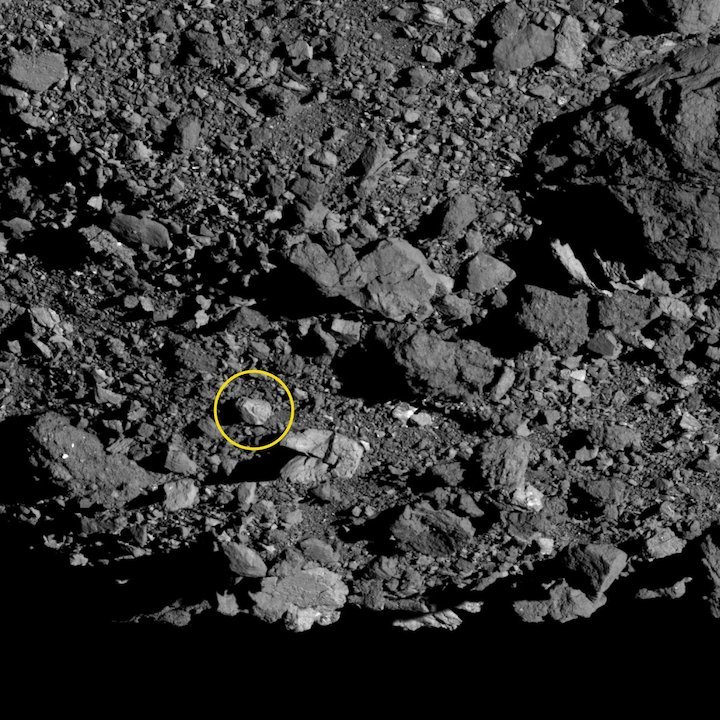 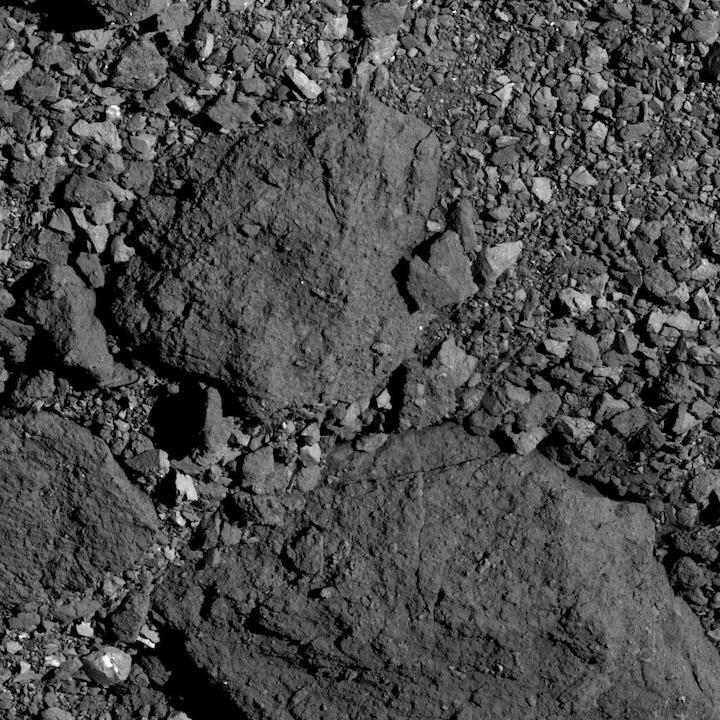 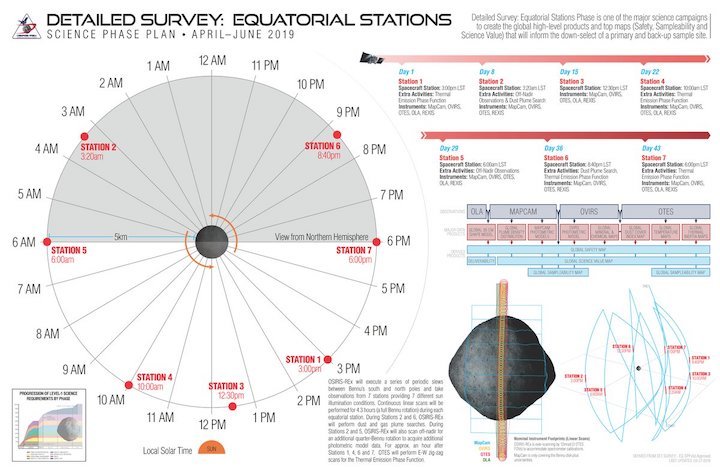 Here's another cool vantage point. I took this image while flying over Bennu's equator, looking down toward Boulder #1 and then off into space. There is so much material on Bennu, and just so much blackness in space. 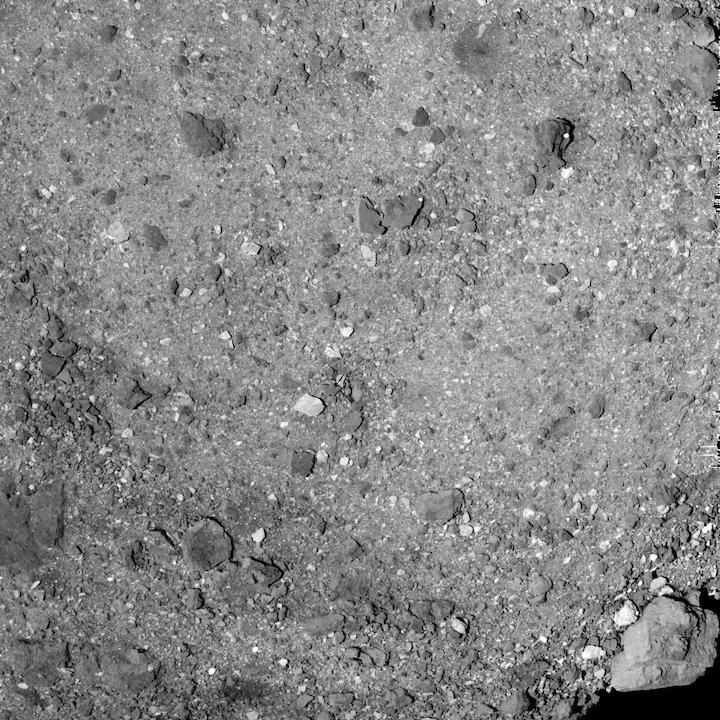 Here's another view of Bennu's largest boulder, which protrudes from the asteroid's southern hemisphere. I took this on Mar. 7 during Flyby 1 of Baseball Diamond phase. To get this angle, I pointed PolyCam down and west while flying over the equator. 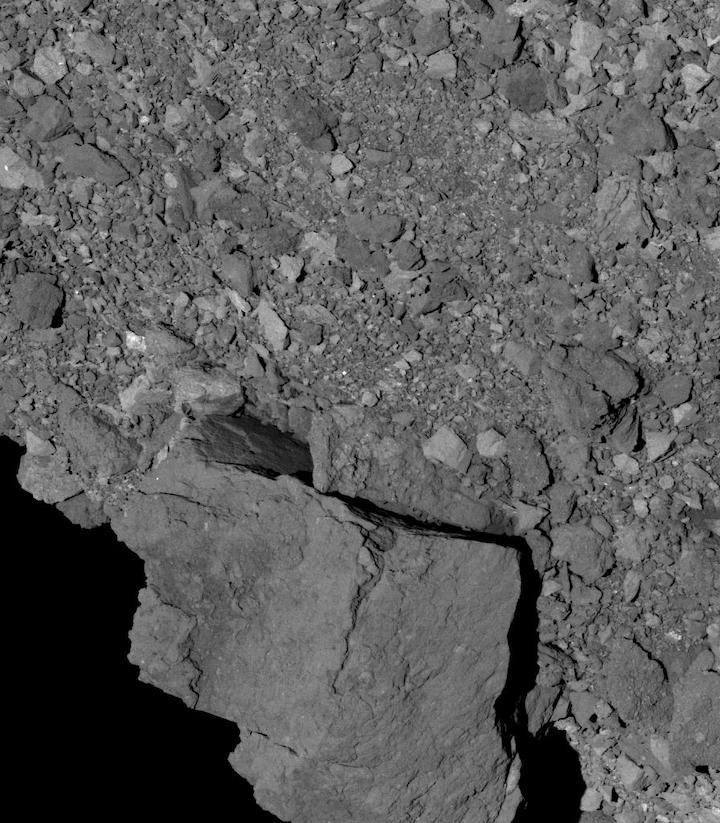 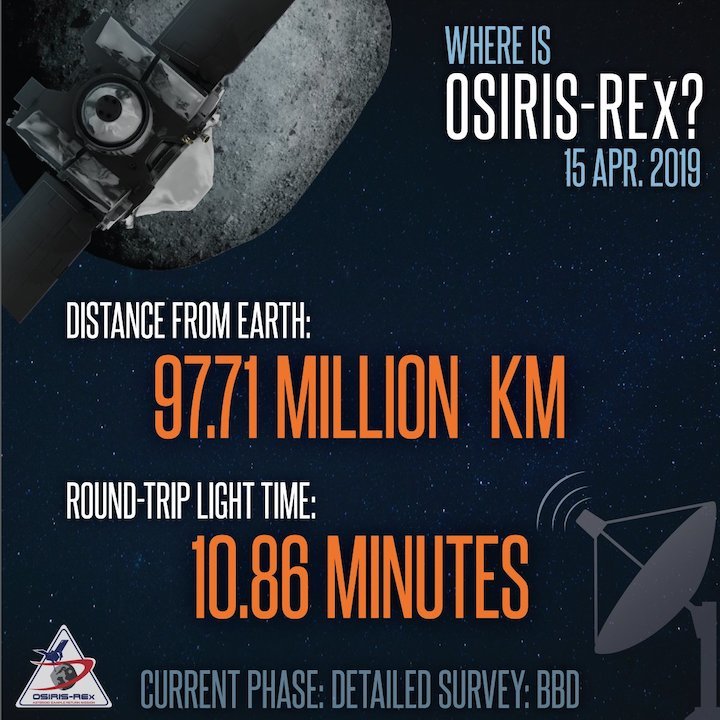 Citizen scientists assemble! NASA’s OSIRIS-REx mission to the asteroid Bennu needs extra pairs of eyes to help choose its sample collection site on the asteroid – and to look for anything else that might be scientifically interesting. 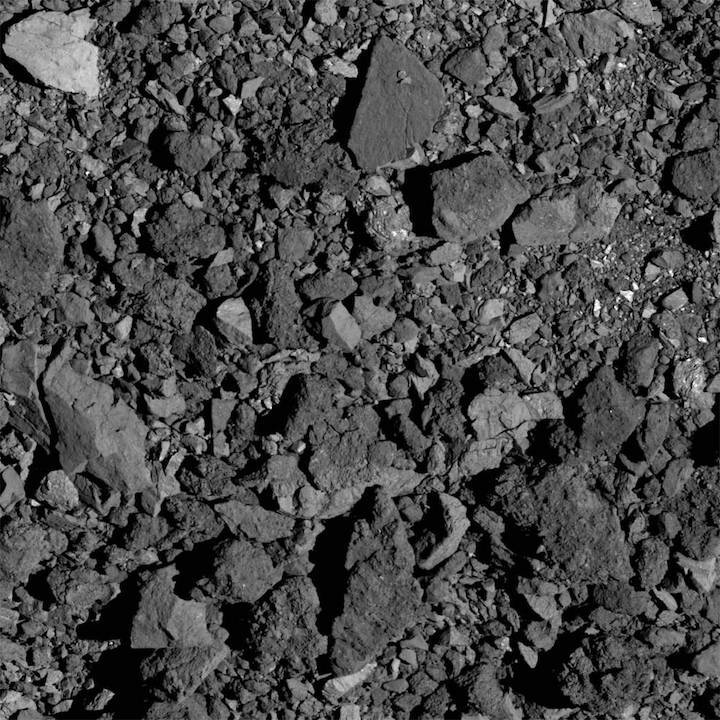 This image shows a view of asteroid Bennu’s surface in a region near the equator. It was taken by the PolyCam camera on NASA’s OSIRIS-REx spacecraft on March 21 from a distance of 2.2 miles (3.5 km). The field of view is 158.5 ft (48.3 m). For scale, the light-colored rock in the upper left corner of the image is 24 ft (7.4 m) wide.
Credits: NASA/Goddard/University of Arizona

The OSIRIS-REx spacecraft has been at Bennu since Dec. 3, 2018, mapping the asteroid in detail, while the mission team searches for a sample collection site that is safe, conducive to sample collection and worthy of closer study. One of the biggest challenges of this effort, which the team discovered after arriving at the asteroid five months ago, is that Bennu has an extremely rocky surface and each boulder presents a danger to the spacecraft’s safety. To expedite the sample selection process, the team is asking citizen scientist volunteers to develop a hazard map by counting boulders.

“For the safety of the spacecraft, the mission team needs a comprehensive catalog of all the boulders near the potential sample collection sites, and I invite members of the public to assist the OSIRIS-REx mission team in accomplishing this essential task,” said Dante Lauretta, OSIRIS-REx principal investigator at the University of Arizona, Tucson.

For this effort, NASA is partnering with CosmoQuest, a project run out of the Planetary Science Institute that supports citizen science initiatives. Volunteers will perform the same tasks that planetary scientists do – measuring Bennu’s boulders and mapping its rocks and craters – through the use of a simple web interface. They will also mark other scientifically interesting features on the asteroid for further investigation.

The boulder mapping work involves a high degree of precision, but it is not difficult. The CosmoQuest mapping app requires a computer with a larger screen and a mouse or trackpad capable of making precise marks. To help volunteers get started, the CosmoQuest team provides an interactive tutorial, as well as additional user assistance through a Discord community and livestreaming sessions on Twitch.

“We are very pleased and excited to make OSIRIS-REx images available for this important citizen science endeavor,” said Rich Burns, OSIRIS-REx project manager at NASA Goddard Space Flight Center. “Bennu has surprised us with an abundance of boulders. We ask for citizen scientists’ help to evaluate this rugged terrain so that we can keep our spacecraft safe during sample collection operations.”

Sample return isn’t new for NASA – this year, the agency is celebrating the 50th anniversary of the Apollo missions to the Moon, which allowed astronauts to bring back 842 pounds (382 kilograms) of rocks and lunar soil. Those samples helped scientists discover that the Moon has water locked in its rocks and even permanently frozen in craters. These findings and others inspired the agency to create the Artemis program to return humans to the Moon by 2024 and start preparing for human exploration on Mars.

“The OSIRIS-REx mission will continue the Apollo legacy by giving scientists precious samples of an asteroid,” said Lori Glaze, director of the Planetary Science Division at NASA Headquarters in Washington. “These samples will help scientists discover the secrets of planetary formation and the origins of our planet Earth.”

The Bennu mapping campaign continues through July 10, when the mission begins the sample site selection process. Once primary and secondary sites are selected, the spacecraft will begin closer reconnaissance to map the two sites to sub-centimeter resolution. The mission’s Touch-and-Go (TAG) sampling maneuver is scheduled for July 2020, and the spacecraft will return to Earth with its cargo in September 2023.

Goddard provides overall mission management, systems engineering, and the safety and mission assurance for OSIRIS-REx. Dante Lauretta of the University of Arizona, Tucson, is the principal investigator, and the University of Arizona also leads the science team and the mission’s science observation planning and data processing. Lockheed Martin Space in Denver built the spacecraft and is providing flight operations. Goddard and KinetX Aerospace are responsible for navigating the OSIRIS-REx spacecraft. OSIRIS-REx is the third mission in NASA’s New Frontiers Program, which is managed by NASA’s Marshall Space Flight Center in Huntsville, Alabama, for the agency’s Science Mission Directorate in Washington. 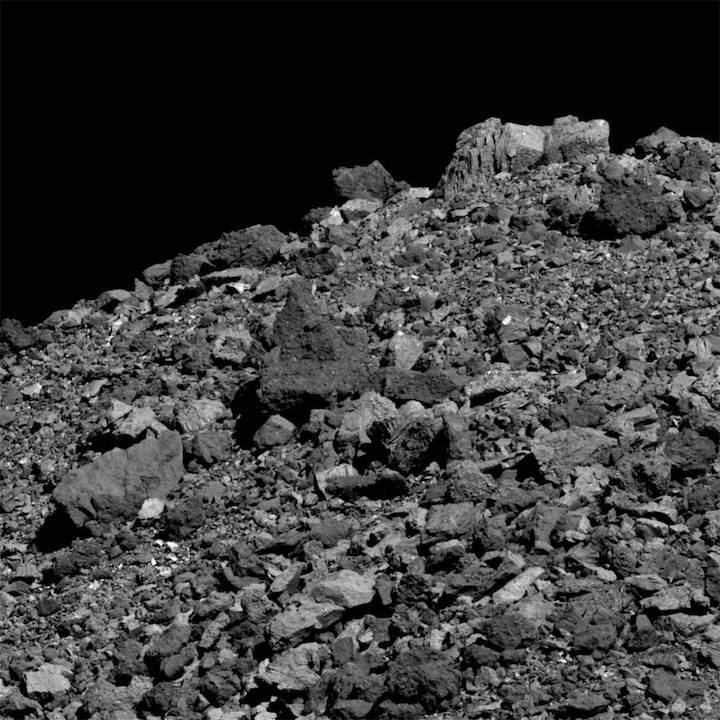 This image shows the wide variety of boulder shapes, sizes and compositions found on asteroid Bennu. It was taken by the PolyCam camera on NASA’s OSIRIS-REx spacecraft on March 28 from a distance of 2.1 miles (3.4 km). The field of view is 162.7 ft (49.6 m). For scale, the large, light-colored boulder at the top of the image is 15.7 ft (4.8 m) tall.
Credits: NASA/Goddard/University of Arizona
Quelle: NASA
Raumfahrt - OSIRIS-REx - ASTEROID SAMPLE RETURN MISSION -Update 15
2462 Views
Created with page4