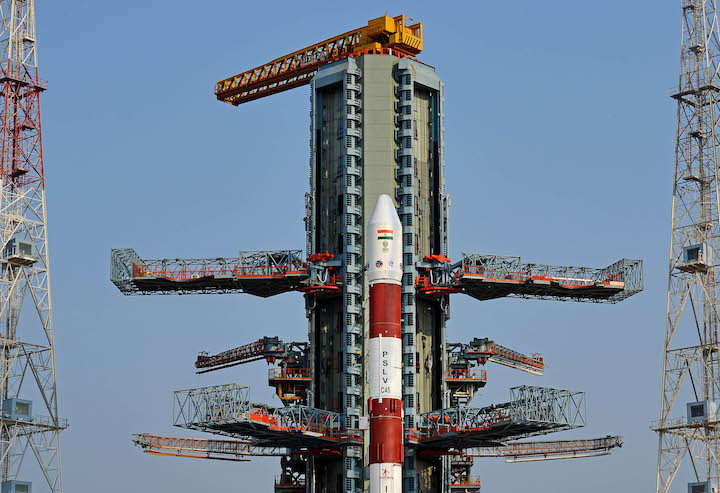 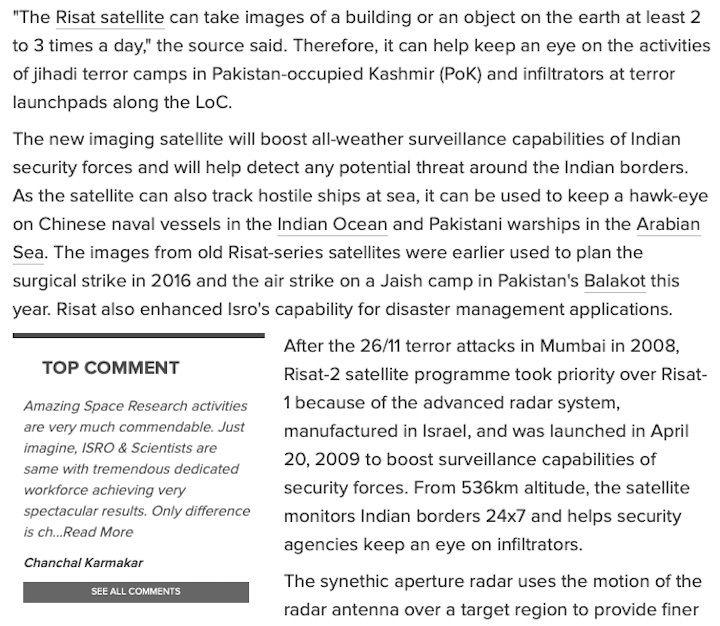 ISRO to launch RISAT on May 22 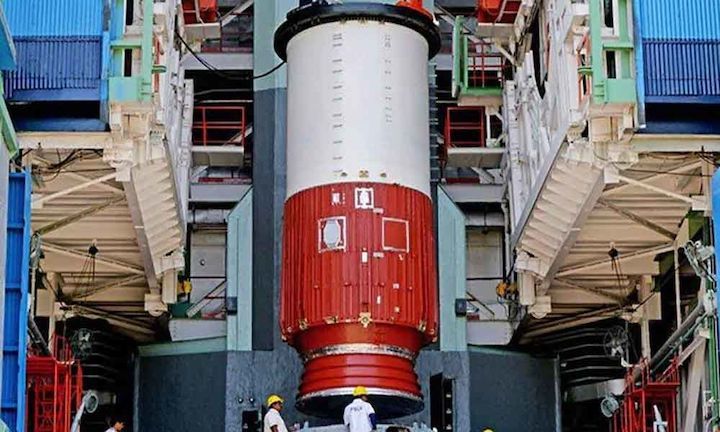 The Indian Space Research Organisation (ISRO) on Saturday said the PSLV-C46, on its 48th mission, would launch RISAT, a radar imaging earth observation satellite, on May 22.

The Indian Space Research Organisation (ISRO) on Saturday said the PSLV-C46, on its 48th mission, would launch RISAT, a radar imaging earth observation satellite, on May 22.

The launch, subject to weather condition, would take place from the Satish Dhawan Space Centre in Sriharikota, a press release from the space agency said here.

The PSLV-C46 is the 14th flight of PSLV in 'core-alone' configuration, the statement said. The RISAT-2B would be placed in an orbit of 555 km at an inclination of 37 degrees, it said.

ISRO has made provision for the public to view the launch from recently opened viewers' gallery at the Satish Dhawan Space Centre. Online registration to watch the take-off would start five days before the launch, it said. 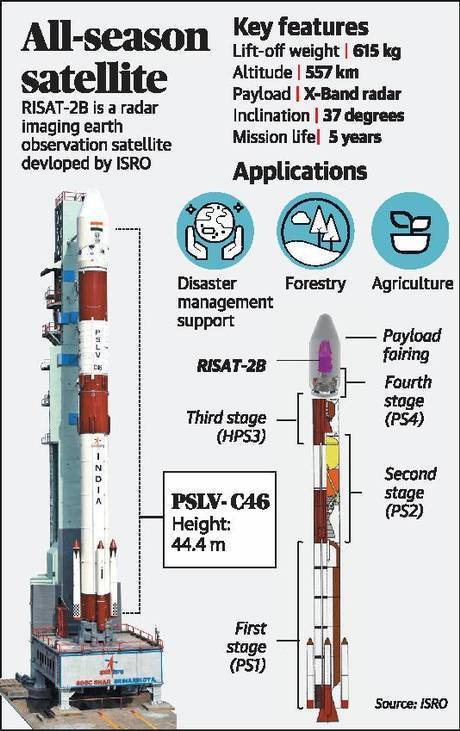 RISAT-2B to be launched on May 22 from Sriharikota

RISAT-2B, the satellite due to be launched before dawn on May 22 from Sriharikota, will mark the resumption of a vital ring of Indian all-seeing radar imaging satellites after seven years.

At least a half-dozen could be foreseen in the near future, mainly to add to the reconnaissance capability from about 500 km in space. A constellation of such space-based radars means a comprehensive vigil over the country.

In a recent conversation with The Hindu,Indian Space Research Organisation Chairman K. Sivan had said many RISATs were planned. RISAT-2B is to be followed by RISAT-2BR1, 2BR2, RISAT-1A, 1B, 2A and so on. If ISRO orbited its first two radar satellites in 2009 and 2012, it plans to deploy four or five of them in 2019 alone.

When it is cloudy or dark, ‘regular’ remote-sensing or optical imaging satellites — which work like a light-dependent camera — cannot perceive hidden or surreptitious objects on the ground. Satellites that are equipped with an active sensor, the synthetic aperture radar (SAR), can sense or ‘observe’ Earth in a special way from space day and night, rain or cloud. This all-weather seeing feature is what makes them special for security forces and disaster relief agencies.

“Radar imaging satellites are at a premium in the Earth observation scene,” said Mukund Rao, former Deputy Director of Earth Observation Systems at ISRO and now professor at the National Institute for Advanced Studies, Bengaluru. “Worldwide, quite a few of them are planned to be launched. There is also a large availability of radar images data in the market.”

A radar imaging satellite is complex to assemble. Interpreting its images is equally complex. ISRO took almost 10 years to realise RISAT-1, said an another expert who did not wish to be named. It sends much heavier data than plain remote sensing satellites.

“In India we also use radar imaging for crop estimation because our main crop growing season of kharif is in May-September when it rains and gets cloudy. We have used this data extensively for forestry, soil, land use, geology and during floods and cyclone.” 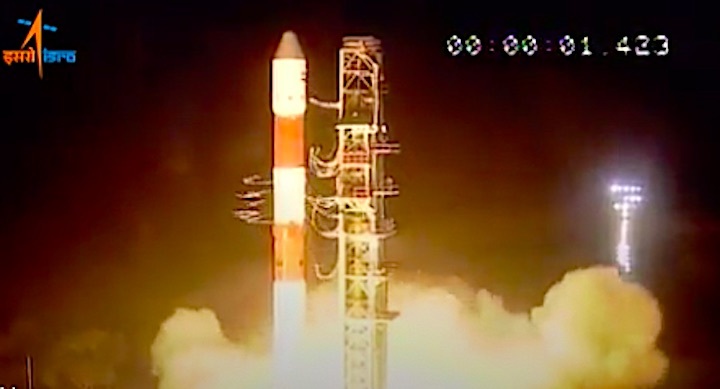 The Indian Space Research Organization (ISRO) used a Polar Satellite Launch Vehicle designated PSLV-C46 to launch its third radar imaging satellite, named RISAT-2B, from the Satish Dhawan Space Centre in Sriharikota, India. The rocket lifted off at 8 p.m. EDT (0000 GMT, or 5:30 a.m. local time on May 22) just as the sun began to rise over the Bay of Bengal.

Equipped with an X-band synthetic aperture radar, RISAT-2B will be able to look through the clouds to observe Earth's surface day and night. Imagery from RISAT-2B can be useful for civilian purposes like agriculture and disaster relief management, ISRO officials said in a description of the mission. But it will also be used for surveillance purposes. 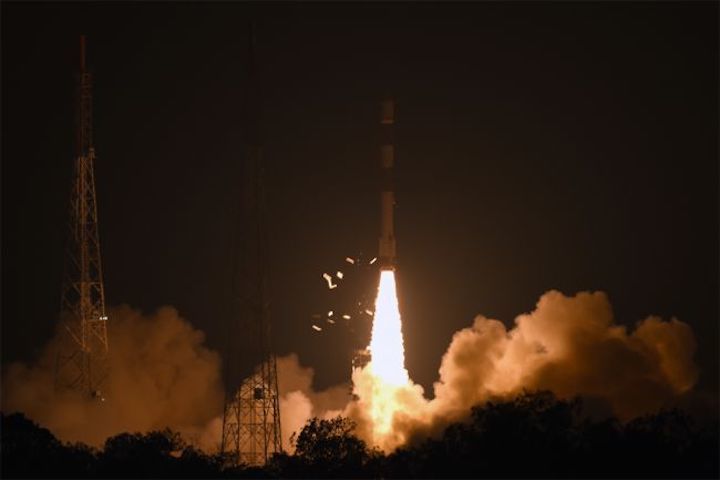 According to The Times of India, RISAT-2B will watch over India's borders and the country's surrounding waters to monitor for foreign threats. For example, it will be able to provide views of jihadi terror camps in the Kashmir region, which has long been the subject of a territorial dispute between India and Pakistan. "The RISAT satellite can take images of a building or an object on the earth at least two to three times a day," an ISRO official told The Times of India.

RISAT-2B will provide detailed images of Earth's surface with a resolution of about 3.3 feet (1 meter) as it orbits the Earth at an altitude of 346 miles (557 kilometers). Its orbit, which is inclined 37 degrees to the equator, won't enable global surveillance. Rather, the satellite's gaze will be fixed on India and Pakistan.

RISAT-2B will be the third satellite in India's radar imaging satellite program. The first, RISAT-2, launched in 2009 (before RISAT-1) after India expedited its development in response to the 2008 Mumbai terror attacks. RISAT-2 "took priority over RISAT-1 because of the advanced radar system," and its launch was fast-tracked "to boost surveillance capabilities of security forces," The Times of India reported. That was India's first reconnaissance satellite, and RISAT-2B is intended to replace it. 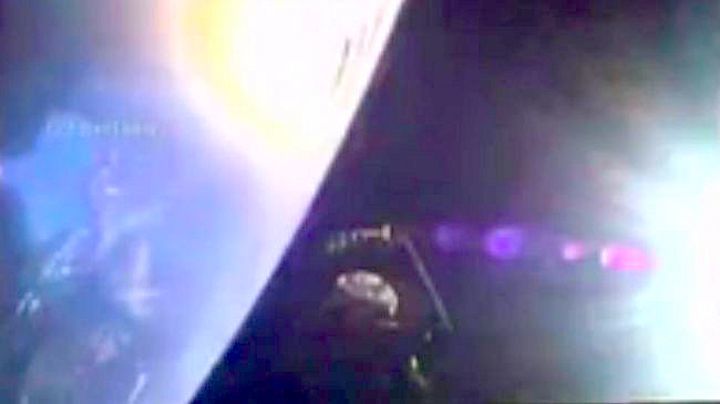 In 2012, India launched its second radar imaging satellite, RISAT-1. That satellite was never meant to be used for surveillance purposes. Rather, its focus was on natural resources management like forestry and agriculture. Four years into its planned five-year life span, RISAT-1 was hit by orbital debris and was declared nonoperational shortly thereafter.

RISAT-2B is the first radar observation satellite India has launched since 2012, but it's also the first of at least four such satellites that ISRO plans to launch by the end of this year, according to Spaceflight Now. The next one will be the first in a new series of high-resolution optical surveillance satellites called Cartosat-3, and it is scheduled to launch sometime this summer.