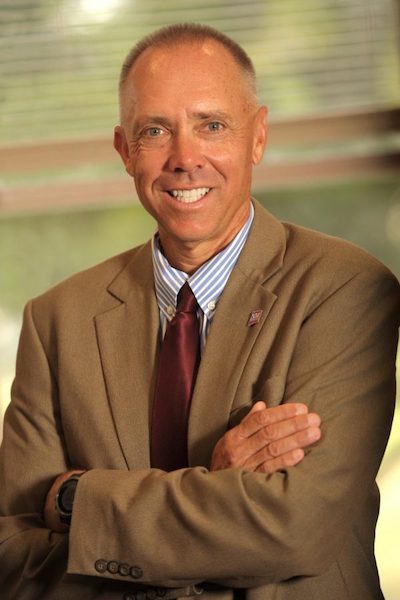 Yet, Stochaj’s accolades go beyond training and handling the beloved pup.

Currently, Stochaj serves as a professor and interim department head for the Klipsch School of Electrical and Computer Engineering at NMSU, and recentlyreceived funding from National Aeronautics and Space Administration to develop a virtual telescope for X-Ray observations.

Stochaj said that a proposal was submitted July 2018 by John Krizmanic to the NASA Astrophysics Science Study and was selected among nine others.

“It is called virtual because the focal length of the lens is so large, about 1 km, that the lens and camera cannot be on a single spacecraft,” Stochaj said. “We are forced to fly two satellites in formation. One has the lens and the second has the imager. This is very tricky navigation and alignment.”

Stochaj along with the help of two graduate students will produce the VTXO.

“[The navigation and alignment] are the major thrust of Kyle Rankin’s work and it will be his dissertation topics. Another graduate student, Daniel Smith, is working on the design of the special lens. A third student, Hunter Stuckey, is working on the camera electronics,” Stochaj said.

Stochaj explained that photographing such small particles doesn’t come without a challenge.

“X rays are high energy photons linked with some of the most fascinating phenomena in the Universe. Imaging these photos is very challenging. The VTXO project using a technique that has not been used in space. It offers the possibility of improving the state of the art by more than an order of magnitude,” Stochaj said.

Stochaj explained that the funding from NASA supports NMSU involvement.

“The funds support NMSU’s participation in a Mission Planning Lab at Wallops Island Flight Facility. This is a design lab for new missions and is a critical step in earning a spot in NASA’s mission queue,” Stochaj said.

Stochaj added that NASA gave more than a quarter of $100,000 for Rankin and himself to work on the VTXO.

“About $26,000 to support a grad student, Rankin, to work on the project and travel funds for both of us,” Stochaj said.

NMSU is a partner with Goddard Space Flight Center and has previously worked with them alongside the University of New Mexico.

“NMSU had a $1.2 million to work on technical challenges associated with the project. Both UNM and GSFC were collaborators on this grant. It funded eight grad students and four undergraduates. Five of these students participated in NASA internship at GSFC where they work with NASA scientists and engineers on the project,” Stochaj said.