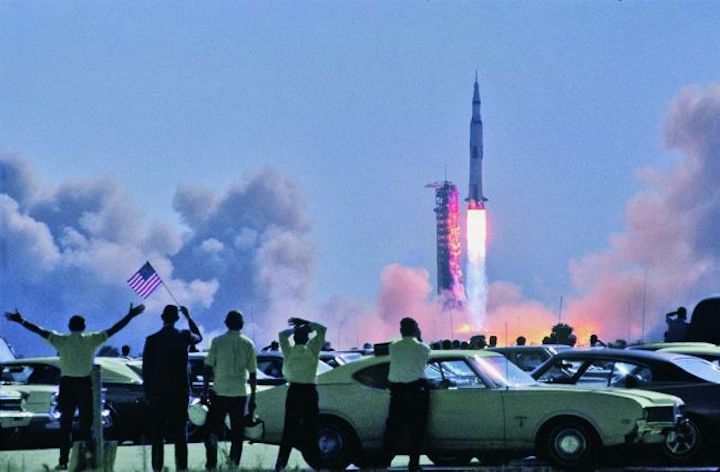 Spectators in a parking lot near the Vehicle Assembly Building wave an American flag as Apollo 11 begins its journey to the moon. The Saturn's automatic engine-shutdown function was inhibited during the first 30 seconds to prevent the vehicle from falling back onto the pad during a launch failure — which was seen as the least preferable option at that stage of the flight.

Michael Collins sitting in the three-seat gondola on the centrifuge at the Manned Spacecraft Center on April 14, 1969.

Armstrong, Collins and Aldrin (left to right) pose for news photographers with the Saturn V behind them on May 20.

Artistic lighting creates a striking picture of the Apollo 11 Saturn V on the evening of May 20.

Details of the flight were eagerly devoured; the News Citizen was a local Houston-area newspaper.

This summer, it will be 50 years since Neil Armstrong and Buzz Aldrin stepped onto the moon's surface and sent back iconic photographs of the bootprints they left behind.

But there are plenty of other photographs from the mission that never saw that kind of fame. "Picturing Apollo 11: Rare Views and Undiscovered Moments" (University Press of Florida, April 2019), a new book by spaceflight historian J.L. Pickering and journalist John Bisney, shows some of the lesser-seen moments of the Apollo program.

"Although we set the stage for the mission with background information on Neil Armstrong, Buzz Aldrin, and Mike Collins, our primary focus is January through August 1969," Bisney wrote in the book's introduction. "We take the reader through crew training, including geology field trips and lunar surface simulations."

This book goes beyond the Apollo 11 photos that typically circulate in the media — the Saturn V rocket launching, Armstrong and Aldrin's first steps on the moon, and so on. Instead, it highlights moments throughout the road to Apollo 11. The photographs include the arrival, processing and assembly of the Saturn V rocket and the Apollo 11 lunar module and command service module; the missions that led to Apollo 11; the rigorous training that Collins, Aldrin and Armstrong went through; and more.

What this book accomplishes is something unique among the large selection of available books that center on NASA's Apollo 11 mission. Containing an incredible collection of photographs, this book really humanizes the Apollo 11 astronauts, who are still seen and remembered as larger-than-life figures. These images go far beyond Armstrong and Aldrin's lunar landing to show the tense, thrilling and even mundane moments along the way in the Apollo program.

Stretching back months before the Apollo 11 Saturn V rocket launched, the photographs show the moments in the program that might have otherwise been forgotten: stressful moments during training, goofy moments between the astronauts and technical milestones for the entire NASA staff. This book would be a great choice for those who want to see what it was really like to be a part of the teams atNASA in 1969. 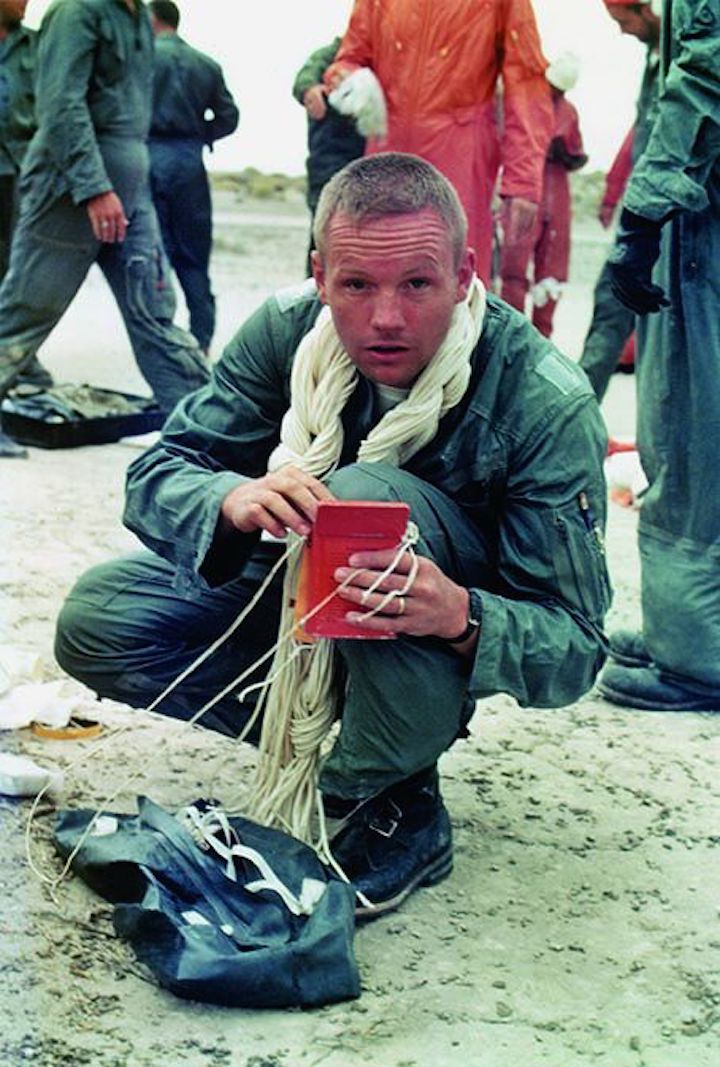 Neil Armstrong while he goes through desert survival training at Stead Air Force Base in northwestern Nevada on Aug. 16, 1963.