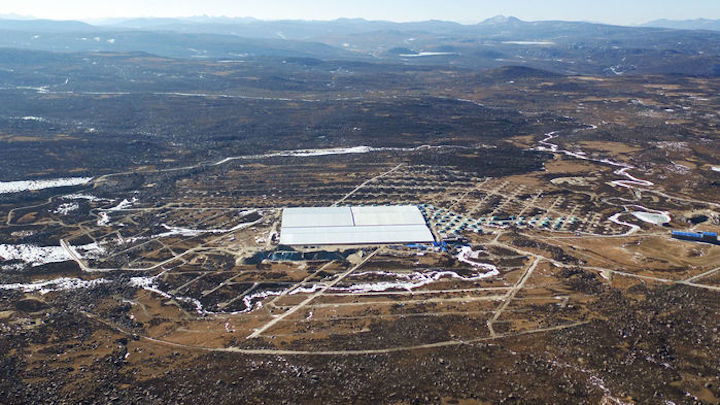 DAOCHENG COUNTY IN CHINA—"I've seen people faint here," warns physicist He Huihai as he deplanes at Daocheng Yading Airport, the world's highest at 4411 meters above sea level. Many of his colleagues at the Institute of High Energy Physics (IHEP) in Beijing take a day to acclimate before resuming work on the Large High Altitude Air Shower Observatory (LHAASO), an ambitious new observatory here on the eastern edge of the Tibetan Plateau.

Although troublesome for humans, the thin air is exactly what makes Tibet good for observing the staggeringly energetic photons that crash into Earth from unidentified objects across the universe. After 3 years of construction, LHAASO is nearly finished and begins observations on 26 April.

LHAASO is just the first in a batch of observatories taking shape across the Tibetan Plateau, which might one day rival the high, dry, Atacama Desert in Chile as a home for premier observatories. IHEP's Ali CMB Polarization Telescope (AliCPT), under construction in the plateau's west, will start its hunt for signs of primordial gravitational waves next year. This year, the National Space Science Center will begin to build the Daocheng Solar Radio Telescope (DSRT), which will study the sun's violent outbursts. And the National Astronomical Observatories of China (NAOC) in Beijing is studying sites on the northwestern rim of the plateau for a 12-meter Large Optical-Infrared Telescope (LOT), larger than any existing telescope.

Astronomers have long recognized the potential of the Tibetan Plateau, which has the highest average elevation of any region on Earth. In 1990, IHEP established a small cosmic ray observatory near Lhasa at 4300 meters. Since 2010, NAOC's Ali Observatory, at 5100 meters, has hosted several small telescopes. But the scientific building boom accelerated after the four new observatories won funding under China's latest Five-Year Plan, covering 2016 to 2020, as part of the nation's efforts to boost basic research. New roads and airports, built as part of China's controversial effort to tie Tibet more closely to the nation, are also encouraging astronomers to come.

Now, the country's biggest optical telescope is a 4-meter facility near Beijing that has not lived up to expectations. The LOT, in contrast, would be one of the most powerful telescopes on Earth. A dispute over its design has delayed progress, but once NAOC settles on a site it hopes to move forward, says NAOC Vice President Xue Suijian. Such an instrument would allow China's astronomers to join the hunt for exoplanets, study the evolution of galaxies, and watch for optical counterparts to gravitational waves, he says.

Reaching for the stars

Four observatories under the auspices of the Chinese Academy of Sciences are taking advantage of the thin, dry air of the Tibetan Plateau. 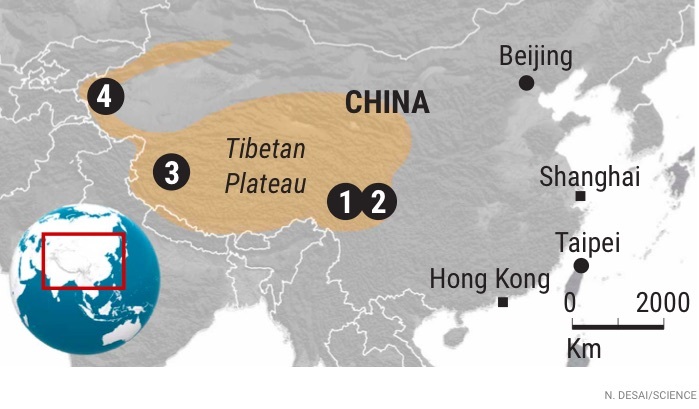 In contrast to that versatile giant, the DSRT has a singular focus: to study solar flares and coronal mass ejections, outbursts that hurl waves of charged particles toward Earth. To capture radio waves emitted during those eruptions, the DSRT's 401 4.5-meter parabolic radio antennas are spaced in a 1-kilometer-wide circle—the best arrangement for imaging the sun, says Yan Jingye, chief engineer of the project. Traveling at light speed, the radio waves outrace the particles, which means the DSRT could help forecast the havoc the outbursts can wreak when they crash into Earth's magnetic field 2 to 3 days later. Yan says the ultimate aim is "real-time analysis and real-time prediction"—which could help spacecraft operators shut down electronics until a storm passes.

AliCPT is the highest of the observatories, perched at 5250 meters to elude the atmospheric water vapor that can block microwaves from the cosmic microwave background (CMB), the afterglow of the big bang. Its antenna will funnel CMB photons to thousands of sensors to search for a telltale pattern in the light's polarization. That pattern would be evidence for the gravitational waves generated by a hypothesized growth spurt in the newborn universe, known as inflation. Although international teams are searching for this signal in the Southern Hemisphere, AliCPT would be the first in the north. "Ideally, you'd want to map the entire CMB sky and from what I know the Tibetan Plateau looks quite promising," says Peter Timbie, a cosmologist at the University of Wisconsin in Madison.

LHAASO will join a worldwide search for the highest energy photons in the universe: gamma rays that, in rare cases, can exceed the energy of Earth's most powerful particle accelerators. When gamma rays strike the atmosphere, they create a cascade of secondary particles spreading in a cone until they hit the ground. Higher energy photons create more secondary particles, which shower across a wider footprint. To catch particles from lower energy photons, LHAASO will use three 5-meter-deep pools of water covering an area larger than 14 U.S. football fields. When the particles hit the water, they will spark faint flashes of blue Cherenkov light spotted by detectors at the bottom of the pools. Thousands of cheaper detectors spaced out across the 1.3-kilometer site will watch for higher energy gamma rays. An additional 1170 buried detectors will look for particles called muons, which can help discriminate between gamma ray showers and showers caused by cosmic rays, charged particles that can also reach extraordinary energies.

Unlike cosmic rays, the paths of gamma rays are unaffected by magnetic fields, making it possible to trace them back to their distant sources. Cao Zhen, LHAASO's chief scientist, says the facility's size gives it a shot at nabbing about 10 of the highest energy gamma rays a year, which could help unravel where they come from—perhaps supernovae, neutron stars, or black holes—and how they are generated. "That's been a mystery for 100 years," Cao says.

"LHAASO starting to take data opens some very exciting prospects," says Peter Mészáros, a theoretical astrophysicist at Pennsylvania State University in State College. LHAASO should also detect photons from gamma ray bursts (GRBs), brilliant outbursts that appear out of nowhere and fade within days. Searchlight beams of radiation jetting out from certain supernovae or neutron star mergers are thought to cause the bursts, but the precise mechanism is a mystery. "Knowing the maximum energy of gamma ray photons from a GRB [could provide] important clues," Mészáros says.

By creating infrastructure and astronomical know-how, the observatories in Tibet could pave the way for successors. Local governments here and in Ali are moving to preserve radio-quiet zones and minimize light pollution in hopes of attracting future projects. And the facilities themselves will show whether Tibet's rarefied air lives up to its astronomical promise.