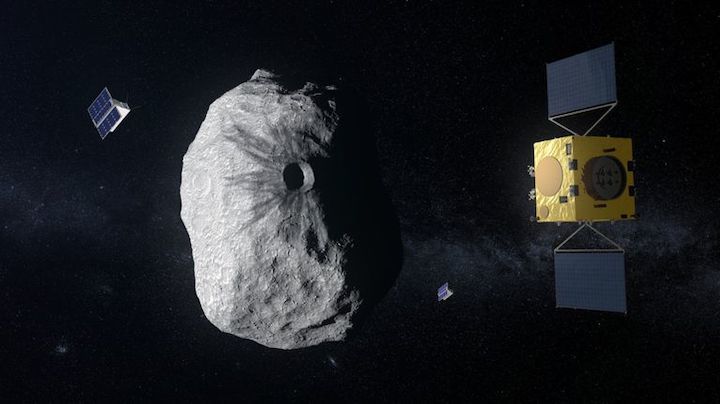 From the giant comet that once wiped out 75 percent of life to the equally intimidating sucker that once killed off Téa Leoni, asteroids have long presented threats both real and imagined to our big blue marble. And we've tried our best to stop them in their tracks, or at least limit the damage.

Earlier this month, the Japan Aerospace Exploration Agency (JAXA)'s spacecraft Hayabusa2practiced Earth defense against an asteroid striking the planet, planting a small projectile of a near-Earth object known as Ryugu. Later this week, JAXA will return to the site and see what this man-made crater did to the asteroid.

Hayabusa2's main mission? To study how impacts affect asteroids. The spacecraft, which contains a “small carry-on impactor,” or SCI, shot a copper projectile around 5.5 pounds into Ryugu's surface. Ryugu, named after a Japanese folktale, is around 5.5 miles in diameter. Moving at around 4,473 mph, the small projectile was designed to leave an impact.

Is this thing a bomb? Well, not quite. A bomb would simply drop on Ryugu's surface and explode. Hayabusa2, on the other hand, carried a plastic explosive charge that then fired the copper projectile at rapid speeds, getting stuck in the rocky asteroid. There isn't any natural copper on Ryugu, which makes the experiment easier to detect.

There's a bit more leeway with the SCI than astronomers generally plan to have in missions. Since we're talking about a sorta-bomb being dropped really fast, JAXA could only aim it so much. While there was a target, this a margin of error of 656 feet.

We'll find out what happened on April 25, but Patrick Michel, CNRS Director of Research of France’s Côte d'Azur Observatory, is expecting the SCI to form a distinctive crater. “We don't know for sure yet, because Hayabusa2 was moved around to the other side of Ryugu, for maximum safety,” says Michel, the co-investigator and interdisciplinary scientist on the Japanese mission, in a press statement. 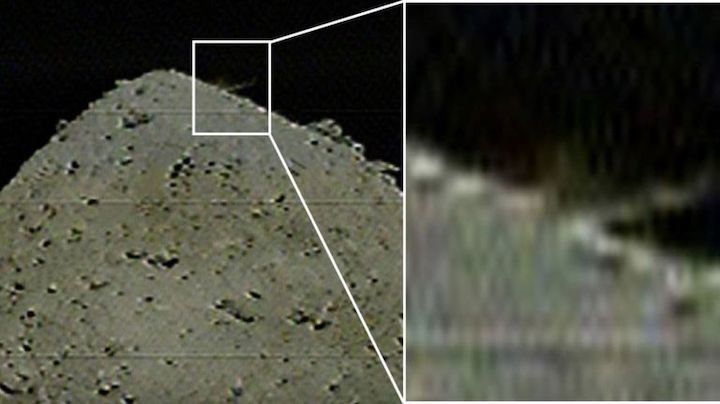 The plume from the SCI hitting Ryugu, captured April 5.

The JAXA scientists want to accomplish several things, including finding out how big of a crater will form on Ryugu from the SCI. They'll determine the damage through comparing before and after pictures. Some predict the crater could be as big as 32 feet in diameter, while others expect something significantly smaller.

“The asteroid’s low gravity means it has an escape velocity of a few tens of centimeters per second, so most of the material ejected by the impact would have gone straight out to space,” says Michel. “But at the same time it is possible that lower-velocity ejecta might have gone into orbit around Ryugu and might pose a danger to the Hayabusa2 spacecraft.”

On Thursday, the scientists will go back and image the crater, expecting that very small fragments have their orbits disrupted by solar radiation pressure—“the slow, but persistent push of sunlight itself,” Michel says. In the meantime, he and his team have been downloading images from a camera called DCAM3, which accompanied the SCI payload “to see if it caught a glimpse of the crater and the early ejecta evolution.”

Scientists around the globe are closely monitoring the results and hoping that the Hayabusa2 experiment will offer a promising start to an asteroid defense program that will grow more robust in years to come. In 2022, NASA's Double Asteroid Redirection Test (DART) will crash two spacecraft into asteroids to measure the reaction.

Meanwhile, the European Space Agency has also proposed following up DART with its own mission, known as Hera. This would arrive at DART's asteroids three years later and examine how impact could affect asteroids over time.

“So,” he says, “building on this Hayabusa2 impact experiment, DART and Hera between them will go on to close the gap in asteroid deflection techniques, bringing us to a point where such a method might be used for real.”