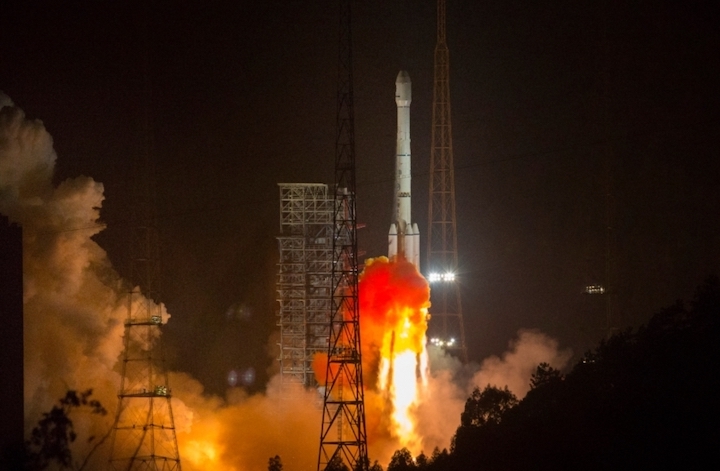 Also designated Beidou-44, the satellite is part of the GEO component of the 3rd phase of the Chinese Beidou (Compass) satellite navigation system, using both geostationary satellites and satellites in intermediate orbits.

The satellites are based on the DFH-3B Bus. This bus has a payload increased to 450 kg and payload power to 4,000 W. They feature a phased array antenna for navigation signals and a laser retroreflector and additionally deployable S/L-band and C-band antennas. With a launch mass of 4,600 kg, spacecraft dimensions are noted to be 2.25 by 1.0 by 1.22 meters.

Previous Beidou satellites were orbited on November 18, 2018, with a Long March-3B/YZ-1 launch vehicle launching the Beidou-3M17 (Beidou-42) and Beidou-3M18 (Beidou-43) satellites from Xicheng.

The Beidou Navigation Satellite System (BDS) has been independently constructed, developed and operated by China taking into account the needs of the country’s national security, economic and social development. As a space infrastructure of national significance, BDS provides all-time, all-weather and high-accuracy positioning, navigation and timing services to global users.

Navigation satellite systems are public resources shared by the whole globe, and multi-system compatibility and interoperability have become a trend. China applies the principle that “BDS is developed by China, and dedicated to the world”, serving the development of the Silk Road Economic Belt, and actively pushing forward international cooperation related to BDS. As BDS joins hands with other navigation satellite systems, China will work with all other countries, regions and international organizations to promote global satellite navigation development and make BDS further serve the world and benefit mankind.

The Beidou Phase III system includes the migration of its civil Beidou 1 or B1 signal from 1561.098 MHz to a frequency centered at 1575.42 MHz – the same as the GPS L1 and Galileo E1 civil signals – and its transformation from a quadrature phase shift keying (QPSK) modulation to a multiplexed binary offset carrier (MBOC) modulation similar to the future GPS L1C and Galileo’s E1.

The current Beidou constellation spacecraft are transmitting open and authorized signals at B2 (1207.14 MHz) and an authorized service at B3 (1268.52 MHz).

The Radio Navigation Satellite Service (RNSS) is very similar to that provided by GPS and Galileo and is designed to achieve similar performances.

The system will be dual-use, based on a civilian service that will provide an accuracy of 10 meters in the user position, 0.2 m/s on the user velocity and 50 nanoseconds in time accuracy; and the military and authorized user’s service, providing higher accuracies.

This was the 100th mission of a Long March-3 launch vehicle.

The Long March-3B/G2 was developed from the Chang Zheng-3A. The CZ-3B features enlarged launch propellant tanks, improved computer systems, a larger 4.2 meter diameter payload fairing and the addition of four strap-on boosters on the core stage that provide additional help during the first phase of the launch. 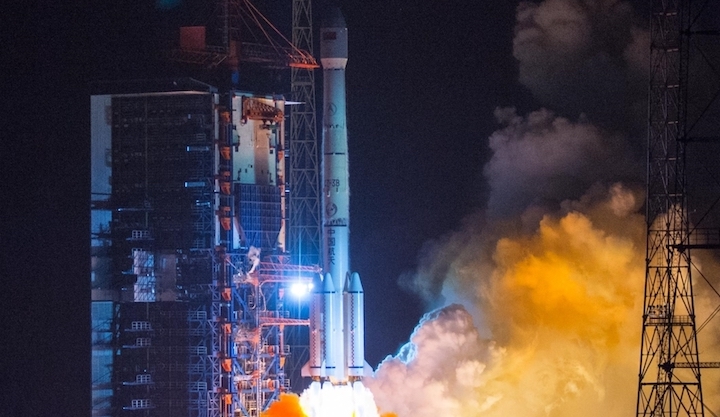 The rocket is capable of launching an 11,200 kg satellite to a low Earth orbit or a 5,100 kg cargo to a geosynchronous transfer orbit.

The CZ-3B/G2 (Enhanced Version) launch vehicle was developed from the CZ-3B, increasing the GTO capacity up to 5,500kg. The CZ-3B/E has nearly the same configurations with CZ-3B bar its enlarged core stage and boosters.

On May 14, 2007, the first flight of CZ-3B/G2 was performed successfully, accurately sending the NigcomSat-1 into pre-determined orbit. With the GTO launch capability of 5,500kg, CZ-3B/G2 is dedicated for launching heavy GEO communications satellite.

The rocket structure also combines all sub-systems together and is composed of four strap-on boosters, a first stage, a second stage, a third stage and payload fairing.

In some missions it can be used the YZ-1 Yuanzheng-1 upper stage.

The Yuanzheng-1 (“Expedition-1″) uses a small thrust 6.5 kN engine burning UDMH/N2O4 with a specific impulse at 3,092 m/s. The upper stage should be able to conduct two burns, having a 6.5 hour lifetime and is capable of achieving a variety of orbits.

It will be adapted for use on the CZ-3A/B/C series mainly for direct MEO/GEO insertion missions (mostly for the navigation satellites of the Beidou GNSS).

The general mission launch sequence for the CZ-3B/G2 missions is similar to the one used for the YZ-1 missions.
The fuelling of the third stage with LOX and LH2 starts at L-7h. First and second stages, as well as the four strap-on boosters, use hypergolic propellant fuelled earlier. At L-1h 20m is the launch vehicle control system power on and function checkout followed by the telemetry system power on and function checkout.

At L-40m the fairing air-conditioning is turned-off and the air-conditioning pipe is dropped-off. Technicians also proceed with the flight program loading and check-up. The gas pipes for the first stage second and are dropped-off. The pre-cooling of the third stage engines takes place at L-20m and at L-13m takes place the third stage propellants topping.

Between L-15m and L-10m the spacecraft umbilical disconnection takes place and at L-3m the telemetry and tracking systems power is switch-over and the third stage propellant fueling pipe is disconnected.

The disconnection of the gas pipe for the third stage is disconnected at L-2m followed by the control system power switch-over at L-1m 30s. Control system, telemetry system and tracking system umbilical disconnection takes place at L-1m as well as the swinging-off of the rods. The TT&C systems start at L-30s and ignition comes at L-0s.

Separation between the second and third stage takes place at T+5m 44s, with the third stage igniting for the first time. This burn ends at T+10m 12s. The vehicle is now on a preliminary orbit until T+20m 56s when the third stage starts its second burn.

This burn will last for 3 minutes and 6 seconds, ending at T+24m 2s. After the third stage shutdown takes places at T+24m 22s an attitude adjustment before Yuanzheng-1 separation with the two satellites at T+25m 42s.

The upper stage will then execute a series of maneuvers to deliver the satellites to its orbits.

The first launch from Xichang took place on January 29, 1984, when the Chang Zheng-3 was launched the Shiyan Weixing (14670 1984-008A) communications satellite into orbit. 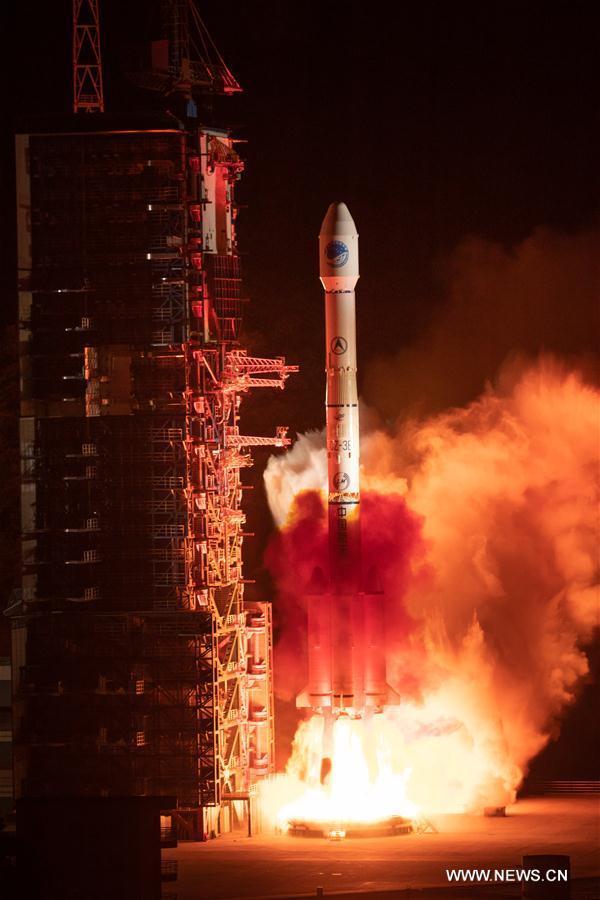 China sent a new satellite of the BeiDou Navigation Satellite System (BDS) into space from the Xichang Satellite Launch Center in Sichuan Province at 10:41 p.m. Saturday.

Launched on a Long March-3B carrier rocket, it is the 44th satellite of the BDS satellite family and the first BDS-3 satellite in inclined geosynchronous Earth orbit.

After in-orbit tests, the satellite will work with 18 other BDS-3 satellites in intermediate circular orbit and one in geosynchronous Earth orbit.

Yang Changfeng, chief designer of the BeiDou system, said that the hybrid constellation design, in which three groups of satellites at different orbital regimes work in concert, was an exclusive BDS innovation and the world's first.

It will increase the number of visible satellites in the Asian-Pacific Region, providing better service for the region, Yang said.

So far, a total of four BeiDou test satellites and 44 BDS satellites have been sent to preset orbits via 36 flight missions launched by Long March-3A and Long March-3B carrier rockets.

The launch on Saturday also marked the first launch of the BDS in 2019. This year, about 8-10 BDS satellites are scheduled to be launched, wrapping up launch missions of all BDS-3 satellites in medium Earth orbit.

China began to construct its navigation system, named after the Chinese term for the Big Dipper constellation, in the 1990s and started serving the Asia-Pacific Region in 2012.

According to Yang, the positioning accuracy of the system has reached 10 meters globally and five meters in the Asia-Pacific Region after the system started to provide global service at the end of last year.

The BDS-3 system is to be completed in 2020. China is also planning to finish building a high precision national comprehensive positioning, navigation, and timing (PNT) system on the basis of the BDS by 2035.

Yang noted that China is willing to share the achievements of the BDS with other countries.

The BDS has been widely used around the world, like building construction in Kuwait, precision agriculture in Myanmar, land survey and mapping in Uganda and warehousing and logistics in Thailand.

The BDS will serve the world and benefit all mankind with more powerful function and better performance, said Yang.