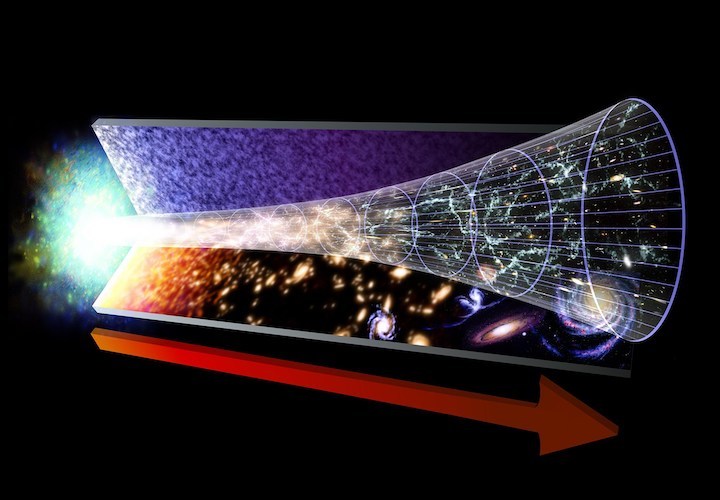 This image represents the evolution of the universe, starting with the Big Bang. The red arrow marks the flow of time.NASA

We’ve all heard that the universe began with the Big Bang — a colossal explosion that ushered it into existence.

But what if the Big Bang wasn’t the beginning? Could there have been an earlier version of the universe, with its own stars and galaxies? A universe populated, perhaps, by its own creatures, themselves wondering what came before their universe?

Or might there be an infinite number of universes, endlessly branching out to create more and more universes? If so, does it even make sense to ask how that whole array of universes came into being?

In trying to answer such questions, scientists bump up against the limits of the laws of physics. Existing theories can account for the evolution of the universe from its earliest moments — from a fraction of a second after the Big Bang — but the question of what came before has been among the most vexing in all of science.

“I’ve been to seminars where we fight about it for hours and hours,” says Renée Hložek, a physicist and cosmologist at the University of Toronto.

Physicists are most confident when discussing things they can see — and the oldest stuff visible with our telescopes is the Cosmic Microwave Background. A sort of “echo” of the Big Bang, the CMB is an all-sky glow that can be measured and mapped with radio telescopes. It came into being 380,000 years after the Big Bang. Before that, we can’t see what the universe was like; it was simply too full of matter for light to flow freely.

“I can only probe as far back as I can see,” Hložek says. “And before the CMB, the universe is opaque.”

But if there are limits to what astronomers can see, there’s no limit to what theorists can imagine. One of the greatest theoretical physicists, Roger Penrose of the University of Oxford, has proposed the idea of a sequence of universes evolving over time. Our Big Bang, he argues, may have been just a “bounce” — a transition from an earlier, collapsing universe to the expanding one that we find ourselves in today.

Penrose made a splash last fall when he took his argument even further, arguing that evidence for these previous universes might exist — in the form of a tell-tale imprint on the CMB that could be revealed through careful analysis of radio telescope data.

Other physicists reacted with skepticism (as they did in 2010, when Penrose made a similar claim). “Obviously, if someone could show that some specific pattern on the microwave sky was a proof that the universe underwent a series of cycles, then that would be spectacularly exciting,” physicist Douglas Scott of the University of British Columbia told Physics World. “But [Penrose’s] paper falls very short of doing that.”

Penrose isn’t the first to argue that the Big Bang wasn’t the ultimate beginning of time — or that there’s more to the universe than we see around us. In 2001, Paul Steinhardt of Princeton University and Neil Turok of the Perimeter Institute in Waterloo, Ontario, put forth a “cyclic model” of the cosmos. The model is derived from something called M-theory, a version of string theory, which holds that matter is of tiny vibrating strings rather than tiny particles. In the cyclic model, our universe is just one of many universes existing alongside each other in a higher-dimensional realm known as the “bulk.” (Don’t worry if you can’t picture something having more than three dimensions — no one else can, either.)

In the model Steinhardt and Turok describe, universes periodically collide with each other, with each collision acting like a new Big Bang. Whereas the standard Big Bang model features a single moment of creation, their model — as with Penrose’s — suggests that we live in “a universe that is made and remade forever,” as Steinhardt puts it.

INFLATION, THE MULTIVERSE, AND BACKWARDS TIME

Steinhardt and Turok aren’t alone in suggesting that we live in a “multiverse,” an array of universes in which ours is just a small part of a much vaster reality — and in which the Big Bang was almost certainly not the beginning.

A similar argument comes from a theory known simply as “inflation,” which dates back to the early 1980s. Its central idea, now widely accepted by physicists, is that the universe grew dramatically in the first tiny fraction of a second — from smaller than a proton to perhaps the size of a grapefruit.

No one knows what might have caused inflation. But some physicists, including Andrei Linde of Stanford University, believe that whatever sparked it could have happened not just once but many times — leading to a multitude of universes. If this “eternal inflation” theory is correct, the cosmos is continuously sprouting new universes like bubbles in a pot of boiling water.

An equally mind-bending theory was proposed in 2013 by English physicist Julian Barbour, Tim Koslowski of the University of New Brunswick and Flavio Mercati of the Perimeter Institute. The three scientists ran computer simulations of simple collections of particles, looking at how they moved in response to gravity over long periods of time (picture a universe containing a thousand marbles and nothing else, with each marble attracted to every other marble). Their computer model correctly described something like the expanding universe we see around us — but also a kind of mirror universe in which time flows in the opposite direction. (They call the dividing line the “Janus point,” after the two-faced Roman god.)

“If the theory is right, then there’s another universe on the other side of the Big Bang in which the direction of experience of time is opposite to ours,” Barbour told Quartz in 2016.

DOES THE QUESTION EVEN MAKE SENSE?

Another possibility — perhaps a more mundane one than those offered by the various bouncing universe or multiverse theories — is that time itself began at the moment of the Big Bang. If that’s the case, there is no “before” at all.

Stephen Hawking, who died in 2018, made such an argument in his 1988 bestseller A Brief History of Time (and made it again in a video interview with Neil deGrasse Tyson not long before Hawking’s death). Hawking compares the idea that something might have existed “before the Big Bang” to the idea of “south of the South Pole.” There's nothing south from that point — the surface of the globe just ends. As hard as it is to imagine, perhaps there simply was no time before the Big Bang.

Predictably, physicists continue to argue about which of these ideas deserve to be taken seriously. Explaining our universe as the product of some earlier universe sounds appealing — but what caused thatuniverse to exist?

“If you have a bouncing cosmology — well, has it been bouncing forever? And if so, how did the bouncing start?” Hložek asks. These proposals, while bold, are “not necessarily any more satisfying … than Hawking saying that you can’t ask the question.”

In the end, the cosmos has in the Big Bang a credible origin story — but no compelling script for what came before “time zero.” Instead, we have a smorgasbord of competing theories, all highly speculative.

“Sometimes I think we should just be honest,” Hložek says, “and just say, ‘It’s my life’s work to try to answer that question — but I don’t know.’”

Astronomie - What happened before the Big Bang? "It's my life's work to try to answer that question," University of Toronto physicist Renée Hložek says.
1963 Views
Created with page4