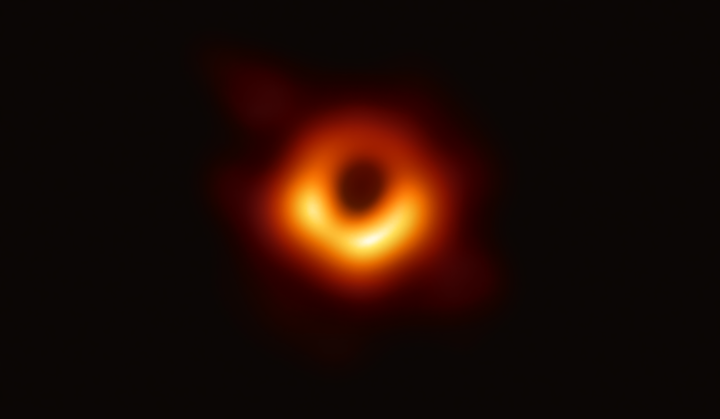 Scientists have obtained the first image of a black hole using Event Horizon Telescope observations of the center of the galaxy M87. The image shows a bright ring formed as light bends in the intense gravity around a black hole that is 6.5 billion times more massive than the Sun. This long-sought image provides the strongest evidence to date for the existence of supermassive black holes and opens a new window onto the study of black holes, their event horizons, and gravity. [Credit: Event Horizon Telescope Collaboration]

On April 10, a team of researchers from around the world revealed an image that many believed impossible to produce: a portrait of the shadow cast by a black hole that sits at the center of the galaxy Messier 87 — 53.49 million light years away.

A luminous orange circle with a dark center and a bright lip, the image is a product of the Event Horizon Telescope (EHT), a distributed collection of eight, high-altitude radio telescopes scattered around the globe that, when combined, form an Earth-sized observatory capable of capturing distant radio waves with a clarity not possible before.

"We are delighted to report to you today that we have seen what we thought was unseeable," said Shep Doeleman, project director of the Event Horizon Telescope, at the announcement event in Washington D.C

The data from the telescopes was collected during a 2017 global campaign, after decades of scientific, engineering, and computational research and preparation. Results of the work describing various aspects of the research were published in six papers in the Astrophysical Journal Letters this week.

Helping to lay the groundwork for the black hole imaging, and providing the theoretical underpinnings that enabled the researchers to interpret the mass, underlying structure, and orientations of the black hole and its environment, were supercomputers at The University of Texas at Austin's Texas Advanced Computing Center (TACC) — Stampede1, Stampede2 and Jetstream — all three of which were supported by grants from the National Science Foundation (NSF), which also provided key funding for the EHT.

Observational appearance of an accretion disk in a General Relativistic Magnetohydrodynamics (GRMHD) simulation at a radio wavelength. The light rays emitted from the inner part of the disk are bent before their arrival to the "telescope" due to the gravitational lensing effect and produce the distorted images. The disk is viewed from 45 degrees above the equatorial plane of the disk. Left side of the image is brighter than the right side due to the Doppler beaming effect: light emitted from a substance moving toward an observer is brighter than that of light moving away from the observer. The central black part is the "shadow" of the black hole, which is what EHT is trying to see. [Credit: Hotaka Shiokawa]

"For decades, we have studied how black holes swallow material and power the hearts of galaxies," said Harvard University professor and EHT researcher Ramesh Narayan, who used TACC resources in support of the project. "To finally see a black hole in action, bending its nearby light into a bright ring, is a breathtaking confirmation that supermassive black holes exist and match the appearance expected from our simulations."

Several teams of researchers, including Narayan, used the high-performance resources of Stampede1 and Stampede2 to model the physical attributes of M87 and predict observational features of the black hole.

"We are doing finite difference, three-dimensional simulations with not just gas dynamics, but also magnetic fields," he said. "That includes radiation and what is called two-temperature physics in a general relativistic framework. For these, we really do need TACC's Stampede system with lots of cores and lots of hours."

Predicted images and quantities from simulations were compared to the real EHT observational values and used to validate the model and even fundamental theories such as general relativity, according to Hotaka Shiokawa, a postdoctoral fellow at the Harvard-Smithsonian Center for Astrophysics and another member of the EHT team. Shiokawa's underlying general relativistic magnetohydrodynamics simulations were run on Stampede1 and Stampede2 as well.

"The simulations are computationally very expensive and supercomputers are definitely needed," he said.

After the relativistic simulations of M87 were run, further simulations converted the dynamics of the black hole into a picture of what such a system would look like from the perspective of Earth using ray-tracing methods.

"You pretend you're an observer looking at the system from some viewing angle," said Narayan. "You ask: ‘What would I observe if this were the real system? What kind of image I would see at this spectrum?'"

The simulations and visualizations help scientists determine whether the image obtained through observation matches up with reliable physical theories. The first-of-its-kind image also helps confirm and fine-tune the theoretical astrophysical models, including properties of accretion disks — the matter swirling around the edge of the black hole — and jets — energy spinning out of a black hole and shooting through space.

University of Illinois at Urbana-Champaign Professor of Physics and Astronomy Charles Gammie, a member of the EHT Science Council Board who co-led the theory working group and served as co-coordinator of Paper V, was another researcher who focused on the theoretical interpretation of the EHT data using TACC resources.

Gammie and his students made significant contributions to the collaboration's theoretical analysis. They generated an extensive library of three-dimensional, time-dependent numerical models, which they compared with the five petabytes of EHT data. The effort was a massive computational undertaking, and Gammie's team developed sophisticated computer codes to make running and analyzing the simulations as efficient as possible.

Researchers from the Event Horizon Telescope collaboration used Stampede2 to perform relativistic simulations of M87. These were compared with data from the radio telescopes to help confirm the final image.

"The computing resources at TACC were crucial in enabling our survey of black hole spin, and in the development of our GRMHD [General Relativity Magnetohydrodynamic] code, our radiative transfer code, and other analysis codes, over the last decade," said Gammie, who has computed on TACC systems since 2008.

Using Stampede2, Gammie produced simulations of accretion disks related to the EHT targets, which aided in the interpretation of data. His team used a code they developed to survey the parameter space and identify models that best fit the data.

"M87 is the nearest galaxy with a supermassive black hole that's generating a powerful jet — a beautiful streamer made of plasma travelling at close to the speed of light," Gammie noted.

"One of the great mysteries in astronomy has been how such jets are launched. Our simulations, which are based on the motion of magnetic fields and hot gas near the black hole, showed that the jets are powered by the black hole itself."

The Extreme Science and Engineering Discovery Environment (XSEDE), a virtual organization funded by NSF that integrates and coordinates the sharing of advanced digital services across the U.S., awarded time on TACC systems to the researchers.

BRINGING THE BLACK HOLE TO THE CLOUD

Alongside the simulation and modeling effort, another group of researchers from the University of Arizona (UA) were using Jetstream — a large-scale cloud environment for research located both at TACC and Indiana University — to develop cloud-based data analysis pipelines that proved crucial for combining huge amounts of data taken from the geographically-distributed observatories, and sharing the data with researchers around the world.

"New technologies such as cloud computing are essential to support international collaborations like this," said Chi-kwan Chan, leader of the EHT Computations and Software Working Group and an assistant astronomer at UA. "The production run was actually carried out on Google Cloud, but much of the early development was on Jetstream. Without Jetstream, it is unclear that we would have a cloud-based pipeline at all."

Still from a simulation of hot gas falling into the black hole at the center of the Milky Way. [Credit: Lia Medeiros, Chi-Kwan Chan, Feryal Özel, Dimitrios Psaltis]

Using Jetstream, Chan and his colleagues showed that it was possible to use cloud computing to perform correlations, a process that removed noise from the data and reduced the data from an unwieldy scale (5 petabytes) to a scale (tens of terabytes) that could be more easily stored and shared around the globe for analysis and experimentation by many research groups. They also prototyped a pipeline for fringe fitting using Jetstream that removed systematic errors from the data.

Because the prototypes worked so well, the team was able to receive a grant from the NSF to deploy the same pipeline for data analysis on Google Cloud.

"The only way we were able to use this cloud was because Jetstream was available to us to do all this development," Chan said.

With powerful TACC supercomputers at their disposal, researchers were able to turn theoretical models of black holes into specific predictions about M87, which ultimately gave scientists confidence that the image produced by the EHT collaboration was accurate. The nation's research cyberinfrastructure also provided a testbed for the distributed data analysis pipelines that made such a large, distributed scientific effort possible.

TACC played a similar role in the work leading up to the Nobel Prize-winning detection and, once detected, physical interpretation of gravitational waves. Similar to EHT, TACC worked with researchers from the LIGO collaboration and from Stephen Hawking's Centre for Theoretical Cosmology to improve their data processing efficiency and model the collision of the black holes which created the gravitational waves.

The first image of the M87 black hole is both the end of one long road, and the beginning of another. Work to interpret the results of this major discovery will continue for many years with help from TACC supercomputers.

"These groundbreaking results show how discovery and imagination are fueled by advanced computing systems combined with the talented researchers and developers that use them," said Niall Gaffney, TACC's director of Data Intensive Computing.

"This is just the beginning of our understanding of the extreme gravitational environments of black holes. We at TACC will continue to provide the world-class support and services that lead to these and other fundamental discoveries about the nature of the universe in which we live."