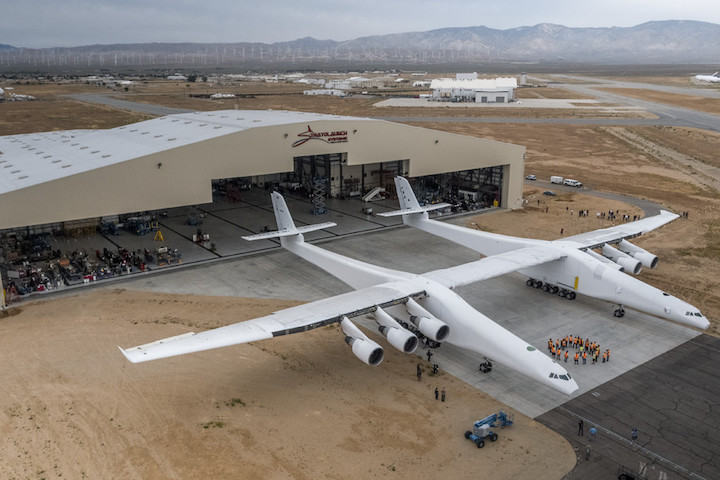 The world’s largest airplane took flight for the first time ever on Saturday morning. Built by rocket launch company Stratolaunch, the 500,000-pound plane with a 385-foot wingspan lifted off shortly after 10AM ET from Mojave Air and Space Port in Mojave, California. It was a critical first test flight for the aircraft, designed to launch rockets into orbit from the air. The inaugural flight lasted for 150 minutes, according to the company, after which the plane safely landed.

The dual-fuselage Stratolaunch is designed to fly to an altitude of 35,000 feet, where it can drop rockets that ignite their engines and boost themselves into orbit around the planet. There is no rocket on this particular flight. But the company has already signed at least one customer, Northrop Grumman, which plans to use Stratolaunch to send its Pegasus XL rocket into space. 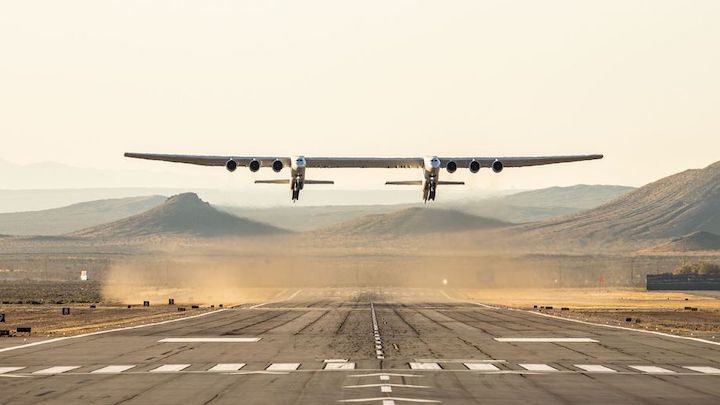 “It was an emotional moment for me, personally, to watch this majestic bird take flight,” said Stratolaunch CEO Jean Floyd. The aircraft performed as expected, reaching a maximum speed of 175 miles per hour and a peak altitude of 15,000 feet.

“The flight itself was smooth, which is exactly what you want a first flight to be,” said test pilot Evan Thomas. During the first phase of the flight, Stratolaunch tested the airplane’s handling qualities. “It flew very much like we had simulated and like we predicted,” he said. According to Stratolaunch, the plane’s systems “ran like a watch” and that the aircraft landed “on the mark” after a few low passes.

Today’s flight comes just three months after Stratolaunch laid off “more than 50” employeesand canceled efforts to develop its own rockets. Originally, the company had planned to build a whole suite of rockets, including a spaceplane. The change in plans was reportedly sparked by the death of Microsoft co-founder Paul Allen, who started Stratolaunch in 2011.

Allen’s name came up frequently during today’s press call “Without a doubt, he would have been exceptionally proud to see his aircraft take flight,” said Floyd. “Even though he wasn’t there today, I did whisper a ‘thank you.’’

Stratolaunch did not take questions during the press call and made no mention of what comes next for the aircraft.

The road to today’s launch involved a number of incremental tests over the last few years, including the initial rollout and an engine test in 2017, and a number of taxis down the runway in Mojave at various speeds. 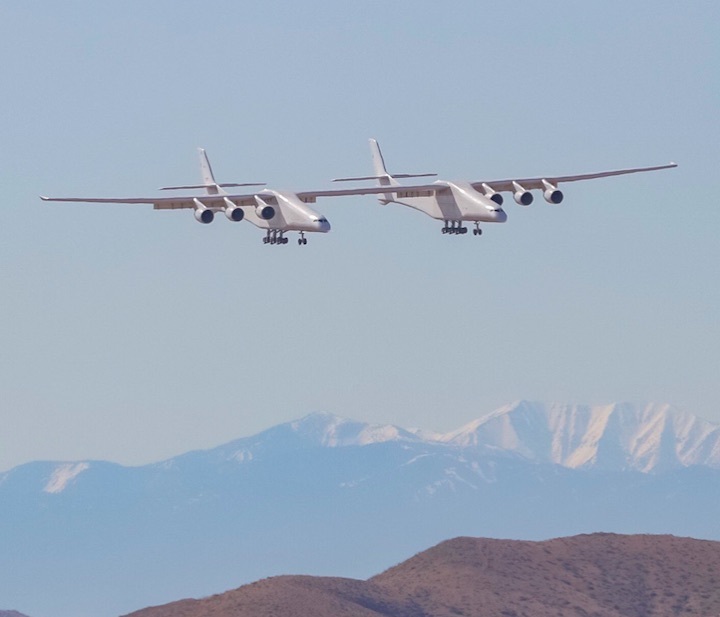 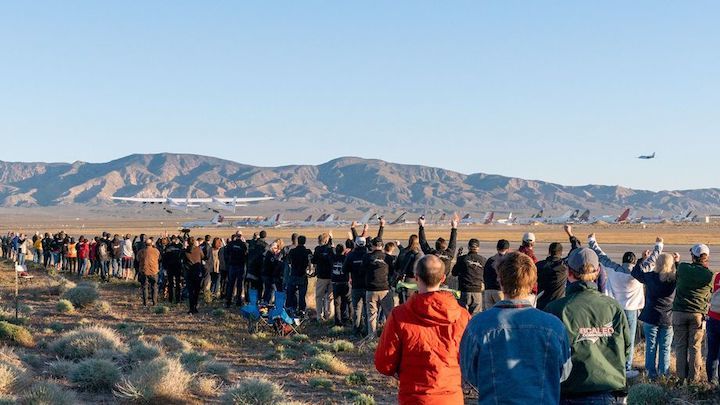 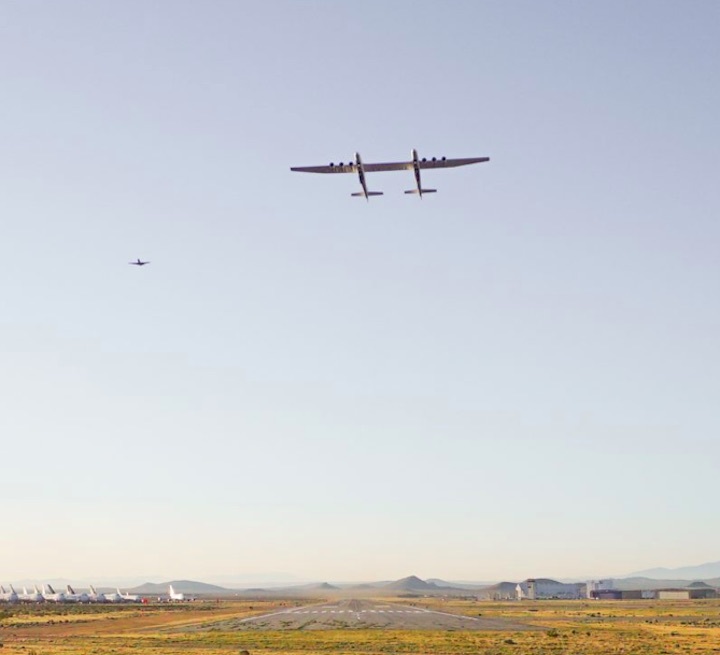 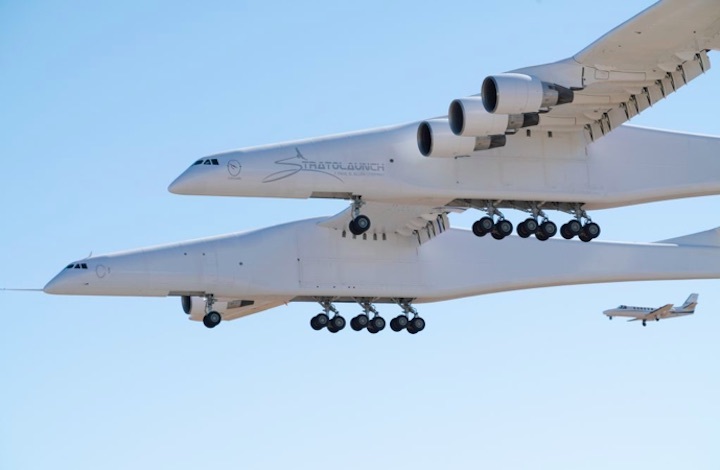 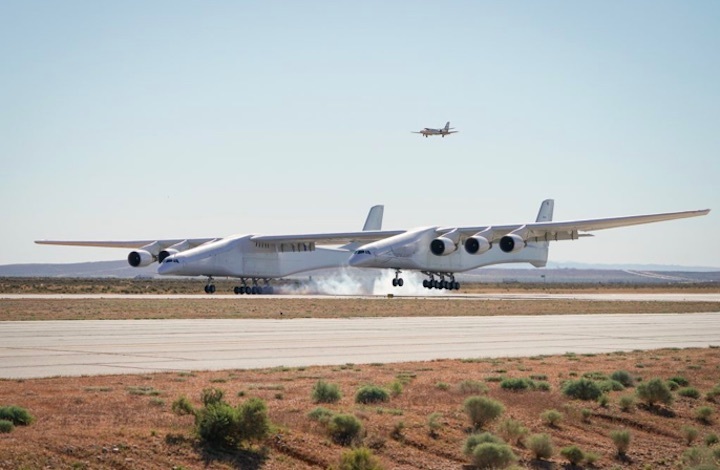 MOJAVE, CA – April 13, 2019 – Stratolaunch Systems Corporation, founded by Paul G. Allen, today successfully completed the first flight of the world’s largest all-composite aircraft, the Stratolaunch. With a dual fuselage design and wingspan greater than the length of an American football field, the Stratolaunch aircraft took flight at 0658 PDT from the Mojave Air &amp; Space Port. Achieving a maximum speed of 189 miles per hour, the plane flew for 2.5 hours over the Mojave Desert at altitudes up to 17,000 feet. As part of the initial flight, the pilots evaluated aircraft performance and handling qualities before landing successfully back at the Mojave Air and Space Port.

“What a fantastic first flight,” said Jean Floyd, CEO of Stratolaunch. “Today’s flight furthers our mission to provide a flexible alternative to ground launched systems. We are incredibly proud of the Stratolaunch team, today’s flight crew, our partners at Northrup Grumman’s Scaled Composites and the Mojave Air and Space Port.”

The Stratolaunch aircraft is a mobile launch platform that will enable airline-style access to space that is convenient, affordable and routine. The reinforced center wing can support multiple launch vehicles, weighing up to a total of 500,000 pounds.

“We all know Paul would have been proud to witness today’s historic achievement,” said Jody Allen, Chair of Vulcan Inc. and Trustee of the Paul G. Allen Trust. “The aircraft is a remarkable engineering achievement and we congratulate everyone involved.”