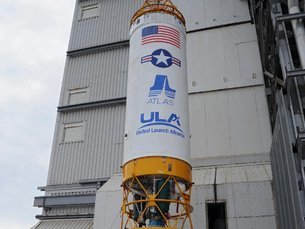 The discarded ‘upper stage’ from a rocket launched almost ten years ago has recently crumbled to pieces.

Fragmentation events like this one – either break ups or collisions – are the primary source of debris objects in space in the range of a few millimetres to tens of centimetres in size. Travelling at vast speeds, these bits of technological trash pose a threat to crucial space infrastructure, such as satellites providing weather and navigation services, and even astronauts on the ISS.

A remarkable video captured by the Deimos Sky Survey in Spain shows the stream of newly-made debris objects as they rush across the sky.

In the clip, a number of small point-like fragments can be seen spread horizontally across frame. As the observatory moves with the debris objects, the background stars are seen as white streaks.

The remnant piece is clearly visible as the largest and brightest point at the centre of about 40-60 smaller pieces, many larger than 30 cm in size, and has been traced back to the upper stage of a rocket launched in September 2009. Originally an Atlas V Centaur upper stage, this rather large nearly cylindrical object would have measured about 12.5 metres in length and three metres in diameter, with a mass of more than two tonnes.

Given the international code 2009-047B, this rocket remnant had been flying in an eccentric orbit around our planet for just under a decade – flung as far as 34 700 km from Earth at the most distant point in its orbit and just 6675 km at the closest.

For an as-yet-unknown reason, the rocket body fragmented some time between 23 to 25 March.

During a meeting of the International Academy of Astronautics (IAA) on 26 March, ESA’s space debris team met their counterparts from Russia, who informed the international community of fragments detected orbiting in the sky.

Just hours later, the Zimmerwald Observatory in Switzerland scheduled immediate observations of the cloud of fragments, and by 26 March had acquired the first views.

Zimmerwald Observatory gets the first look

The animation to the left shows the first series of exposures taken by the 0.8 metre telescope, ZimMAIN, which followed the debris cloud. It reveals several small dots, each a fragment larger than a few tens of centimetres, with background stars again appearing as long streaks.

Not long after, the Deimos Sky Survey followed up with observations of the event from 26-28 March (lead animation in this article), using the ‘Antsy’ optical sensor in Spain, which is adapted for tracking objects in low-Earth orbit.

While Zimmerwald continues to observe the cloud in close collaboration with Russian and ESA experts, ESA’s own 1-metre telescope at the Optical Ground Station at Tenerife, Spain, has joined the observation campaign, detecting a large number of fragments down to 10-20 cm in size.

ESA keeps an eye on events like this and continually updates the international community through its public database, enabling researchers to find patterns and come up with mitigation strategies for spacecraft in all variety of shapes, sizes and orbits. The database also allows operators of satellites and spacecraft to determine the changing risk to their missions from specific fragmentation events.

Once detected and observed, events like these are put into ‘space debris environment models’, allowing teams to compare the fragmentation of real-life debris with predictions – a rare but crucial opportunity to validate or improve models as necessary.

Our human-made space environment (debris not to scale)

International collaboration is essential to exchanging data and models, which takes place via a technical body called the Inter-Agency Space Debris Coordination Committee, which comprises all major European and international space agencies.

“Incidents like this are rare, so to have such rich observations and data from across the globe is a unique opportunity to better understand the human-made environment around Earth, in which our satellites live out their lives”.