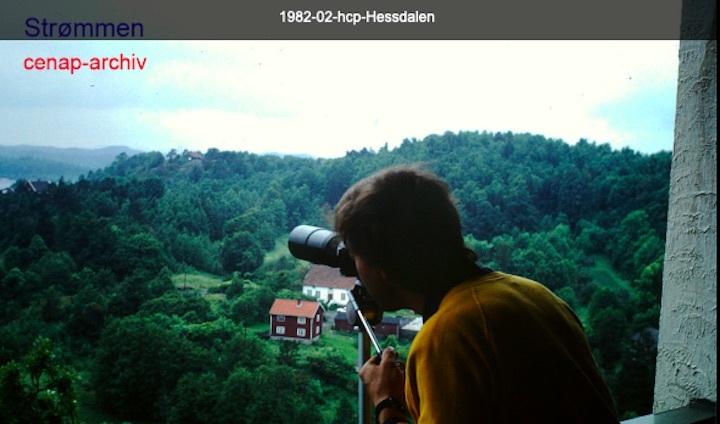 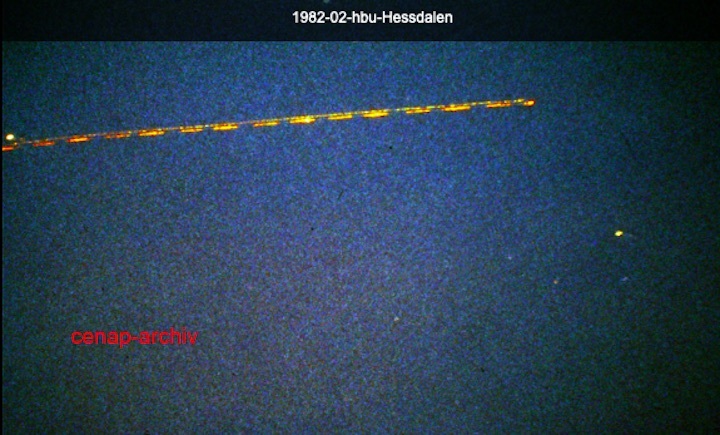 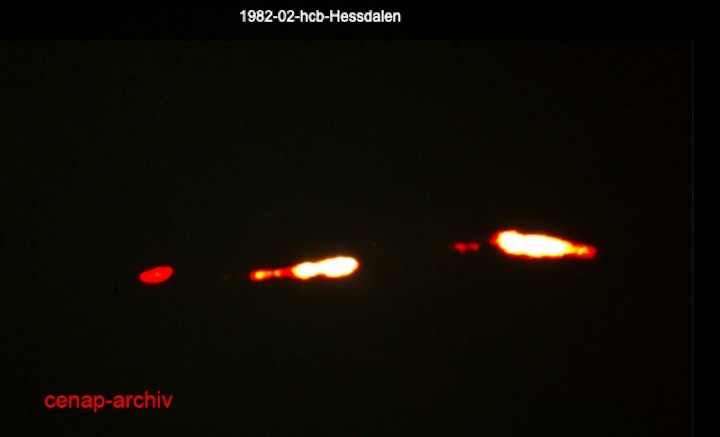 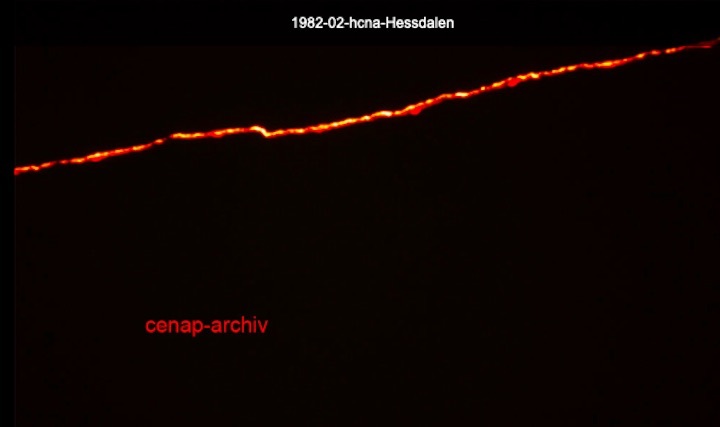 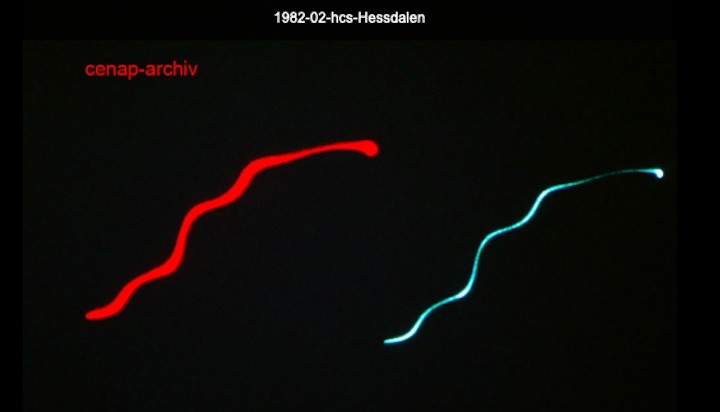 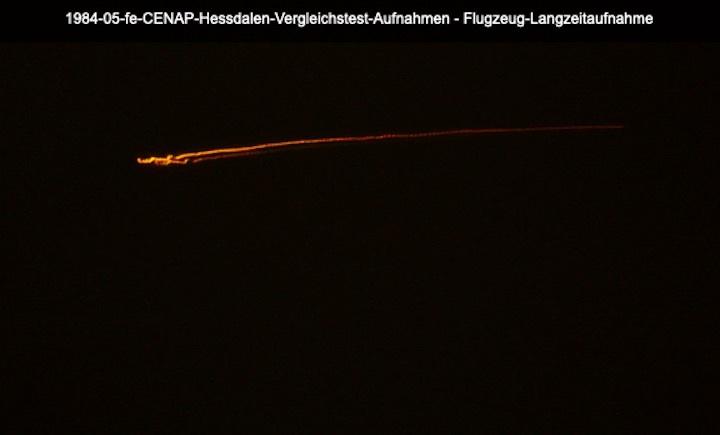 Some seek a natural or alien explanation for these aerial lights in Norway. Turns out the true cause is much simpler.

Let us travel back to 1981, when people in Norway's Hessdalen valley began seeing something strange in their night skies. Colored lights that hung silently sometimes appeared above the valley. Curious onlookers found they were best seen from a slope at the north end of the valley, looking south, and within a few years UFO seekers started converging on Hessdalen. And ever since, there has been one of the lengthiest and most technical of all UFO investigations.

Some call them UFOs, some call them ghost lights, some call them Earthlights. None of the researchers have a very good idea what they are, but Hessdalen's residents don't seem too concerned. Theirs is a small, quiet valley, well off the beaten path, and only a few hundred people live in its scattered village. In 1983, Dr. Erling Strand, a UFO researcher, initiated Project Hessdalen as a sort of central framework for all the information gathered by UFOlogists and other researchers. Strand was convinced that some unknown branch of physics was responsible for the strange lights, and he encouraged as many scientists as he could to join his project.

In 1998, Project Hessdalen constructed on automated measurement station on the popular slope, with a clear view of the sky looking south down the valley. It was filled with an astonishing arrayof technical gear. It included a number of optical cameras, but also magnetometers, weather gear, and equipment for measuring low frequency electromagnetic radiation. Curiously, the station also includes a random number generator, as a part of the Global Consciousness Project, which seeks to prove that collective human consciousness predicts significant events by altering the output of random number generators. Presumably, this is to test whether the appearance of the Hessdalen lights is some sort of psychic event.

What the automated station found is that the lights usually appear in the sky between 9pm and 1am, and more often in the winter. Many photographs have been sent to their web server, and can be seen at hessdalen.org. When they appear, the lights each maintain a constant color temperature, and its spectrum remains consistent.

The researchers dug in to try and track down this elusive new branch of physics. One of Dr. Strand's associates, astrophysicist and radioastronomer Dr. Massimo Teodorani, wrote of the many theories they explored:

Mainly the following possible causes have been considered: ionosphere activity, solar activity, cosmic rays, magnetic monopoles, mini-black holes, Rydberg matter, heated nanoparticles, piezoelectricity, [and] quantum fluctuation of the vacuum state. For none of these causes, except for some aspects of piezoelectricity, was it possible to find a successful proof.

Teodorani himself favored a rather colorful explanation. His theory is a bit lengthy, but I'll paraphrase it. He believes that water seeps into fissures in quartz in the valley, and when it freezes, it exerts pressure on the quartz, causing a piezoelectric effect that produces an electrical current. He then jumps to the assumed presence of a hovering ball of plasma, presumably ignited by the piezoelectric current, and the balance of his complex theory involves the characteristics of the plasma. It binds with water vapor, aerosols, and airborne mold spores. It keeps itself in equilibrium due to complex interactions, and keeps its shape due to a presumed "cool coat" of water and ions.

This is not a useful explanation; it is, at best, a pretty far-out hypothesis. It strings together a number of fringe suppositions, few of which are plausible or have ever been observed. For one thing, what the Earth's entire history has told us is that when water freezes inside rock fissures, it cracks the rock. Not once has it ever been observed to leave the rock intact and relieve the energy by producing electrical current that creates hovering plasma balls. For another thing, natural quartz does exhibit the piezoelectric effect, but there's very little quartz in Hessdalen. It's nearly all schist and sandstone. While schist does contain bits of quartz, the schist itself is easily fractured by ice and would relieve any pressure. Finally, the piezoelectric effect in some natural rock is real but barely detectable. To my knowledge, there's no example of such tiny microvoltages causing anything to ignite, either in the cold, wet natural conditions or in a controlled laboratory.

What Teodorani did was not to look for the source of the lights that were observed; it was, in contrast, an effort that started from the assumption that some unique geophysical process was producing balls of light that floated up out of the ground. He then came up with some hypotheses about how he thinks this might be accomplished. Starting with an explanation, and working backwards to try and match the observations, is the opposite of the way good science should be done.

Even if Teodorani's hypothesis turned out to be true in every detail, it would still not be an acceptable explanation for the Hessdalen observations. People live throughout the Hessdalen valley, and none of the observations have ever included lights coming up out of the ground, or even any lights overhead; indeed, nothing's even been reported to have been witnessed from inside the valley itself. To see the lights, you have to climb up on the hill at the north end of the valley, and look south, across the top of the valley's length. Teodorani's hypothesis presumes that his plasma balls are in the valley and floating upwards; in contrast to the observations that simply state the lights are visible to the south of the observation point. A better explanation for why nobody in the valley has ever seen balls hovering around them then rising overhead is that's not where the lights are, and that their sources are elsewhere.

One piece of advice that Teodorani and the other Hessdalen researchers appear to have failed to heed is that given by Marsha Adams of the International Earthlight Alliance in her 2006 paper titled Air Navigation Artifacts near the Hessdalen Valley, Norway. She states:

Using simple commercially available navigation software, she identified a number of air traffic corridors, VOR navigational stations, and local airports. These included one corridor that I found particularly intriguing: a corridor 18° North from the Tolga VOR, proceeding directly up the Hessdalen valley, straight toward the Automated Measuring Station, from exactly the direction it's facing.

As previously discussed on other Skeptoid episodes dealing with so-called ghost lights — the Marfa Lights in Texas, the Min Min Light in Australia, and the Brown Mountain Lights in North Carolina — there are known physical phenomena that can account for such reports. A better way to investigate the Hessdalen phenomenon would be to at least consider the causes found for these other lights. The Min Min light was proven to be a sort of thermal lensing effect, where warm air collected in ground topography underlaid cooler night air, and reflected lights from over the horizon; an effect we call a superior mirage. However the Marfa and Brown Mountain lights turned out to be misidentifications of conventional lights in a direct line of sight, probably distorted by similar lensing effects. Such thermal irregularities were found in both places. In the case of Marfa, they were car headlights along two prominent highways. At Brown Mountain, it was the headlight of a regularly scheduled locomotive on the plain far away, as well as some other lights. The majority of the images captured by the Hessdalen automated measurement station look exactly like the high-powered landing lights of aircraft following the corridor north from the Tolga VOR.

Trondheim Airport (TRD) is due north of Oslo, Norway. This route passes almost directly over Hessdalen. When the Hessdalen lights first started receiving attention in 1981, charter passenger service between Oslo and Trondheim was in its infancy, having begun with only a few flights in 1976. By 1982, Trondheim had opened its third terminal; and by the time Scandinavian Airlines acquired the local carriers in 2002, the Oslo-Trondheim route was the single busiest in all of Norway. Trondheim is about 40 nautical miles north of Hessdalen, and at that range the use of aircraft landing lights is discretionary. Some pilots will have them on, some won't; and weather often affects their choice. Note the automated station's finding that the lights usually appear between 9pm and 1am, when it's dark and the air traffic is active; and more often in the winter, when more pilots like to use the landing lights during flight amid clouds. Whether the Hessdalen Lights are mysterious balls of unexplained plasma or not, extremely bright lights matching the photographs would have been visible in the sky on many nights. If you've ever stood near the approach to a major airport and looked downrange at night, you've seen the sky dotted with strange, stationary glowing orbs.

At the very same time Project Hessdalen was building its automated measurement station, and UFO researchers were furiously weaving together complex hypotheses about plasma and nanoparticles and electromagnetism and mini-black holes, the skies above were filled with the largest number of these strange, stationary glowing orbs that Scandinavian Airlines had ever put up there.

By no means am I suggesting that aircraft landing lights are the cause of all the Hessdalen sightings, but I have found no mention by any of the project's lead scientists that any serious effort was made to match the lights to aircraft flyovers in an attempt to falsify this particular hypothesis. Indeed, a few of the photographs from the automated station show lights down at ground level. Highway 576 winds along the floor of Hessdalen valley, so it would also be necessary to attempt to correlate ground level sightings with automobile traffic, which is exactly how the Marfa Lights case was solved in Texas. The effects seen at Marfa and in Australia of distant light sources appearing to be nearby, as liquidy and hovering orbs, can be quite impressive and persuasive; and it would be presumptuous of the Hessdalen investigators not to exhaust that possibility. Since we have an excellent and proven explanation for identical light phenomena in other parts of the world, that explanation is perhaps more likely than the list of exotic science-fiction avenues of investigation listed by Dr. Teodorani.

Investigate with an open mind. It's tough, because it means you have to be open to the possibility that you have not, in fact, discovered whole new branches of physics.