The iron core of what was once a world has been found around a white dwarf star, shedding light on the final days of planetary systems—including our own 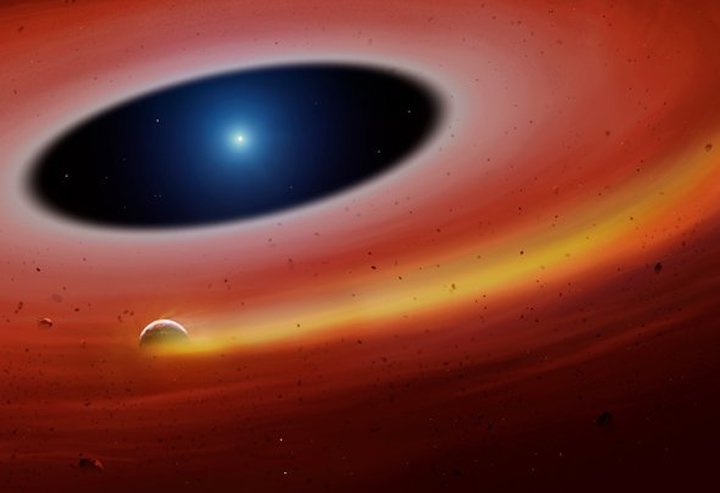 When the majority of stars reach the end of their life, they make their own funeral pyre, throwing off most of their remaining gas in a glorious last display of their immense power and leaving behind a dense, cinderlike core known as a white dwarf. But what becomes of any planets orbiting such a star? This question has been difficult to answer, but now scientists say they have detected the suspected remnant of a white dwarf world, a first-of-its-kind discovery that could offer fascinating insights into planetary systems’ dying days across the universe.

In a paper published today in Science, a team led by Christopher Manser of the University of Warwick in England reports unprecedented observations of a white dwarf slightly larger than Earth but containing almost the mass of the sun. Called SDSS J1228+1040, the star is located about 410 light-years away, and it is more specifically known as a “polluted” white dwarf, owing to the heavy elements astronomers can detect raining down onto its surface. That material is believed to originate from a disk of gas that surrounds the object. And within that disk, the paper’s authors say, they have found a planet’s ghostly remains.

“It’s like the iron core left behind by a larger body that’s been ripped apart,” Manser says. “The crust and mantle have come off this body. We’re left with this iron core orbiting around that has a high internal strength holding it together, not just gravity.”

The white dwarf’s three-million-kilometer-wide debris disk was first discovered more than 15 years ago, making the star one of fewer than a dozen polluted white dwarfs known to be surrounded by disks. When a star of less than about eight solar masses exhausts its hydrogen fuel, it expels its outer layers, engulfing any close-in planets in the process. Some of these worlds, it is thought, might then be ripped apart, after which their shredded remains gather into such a disk. And although more than 4,000 exoplanets have been discovered to date, scientists have only once before seen smoking-gun evidence of this process: the remains of a planet in a disk around the white dwarf WD 1145+017, which was closely studied in 2015.

Whereas those planetary remnants orbit around WD 1145+017 in 4.5 hours, the heavy-metal core circling SDSS J1228+1040 completes a revolution in less than half of that time. The new study’s authors detected the star’s dense companion using the 10.4-meter Gran Telescopio Canarias (GTC) on the Canary Islands in two separating observing periods in April 2017 and in April and May 2018, respectively. By splitting up the white dwarf’s emitted light into its constituent wavelengths—much as a prism splits white light into a rainbow—the team detected the disk and recorded shifts in its color that corresponded to its orbital motion.

Generally, this method is used to observe systems such as SDSS J1228over long periods of years, but by studying this white dwarf over the course of several hours, the team discerned a clump of material within the disk that exhibited a shift that was entirely its own. The shift’s strength suggested its source was a solid object some 600 kilometers across—a suspected planetary core, with a density between 7.7 and 39 grams per cubic meter, comparable to the pure iron found within Earth’s core. “The density of the piece of rock is consistent with what we think the cores of planets [are],” says Luca Fossati of the Austrian Academy of Sciences, who was not involved in the paper. “That’s a big thing. It essentially confirms the idea we have that these disks of dust and debris that orbit around some of the white dwarfs are [the remains of] ancient planets.”

The shift also indicated that the clump orbits at just a half-million kilometers from the star—an extremely close distance at which larger, less dense objects would be stretched and torn apart by the white dwarf’s intense gravitational field. This messy disassembly, which, at its most extreme, is dubbed “spaghettification” by astrophysicists, is the typical fate of anything falling into a black hole. But around the white dwarf, where gravity is not as extreme, a small, dense heavy-metal planetary core could survive. “If you have a small enough object, it’s easier to resist spaghettification,” says Andrew Vanderburg of the Harvard-Smithsonian Center for Astrophysics, who was also not involved in the paper. “What [the researchers] found here is that this planet is orbiting so close to its star that it must be held together by material strength.”

With a specific orbital period of 123 minutes, this core would set a new record for the fastest planetary object orbiting a star; the previous record was the exoplanet KOI 1843.03, which completes an orbit in 4.25 hours. The bizarre system also provides a one-of-a-kind scientific opportunity to scrutinize the exposed core of an exoplanet, even though astronomers presently lack any sufficiently large telescope to directly see the core.

Perhaps, however, similar objects await discovery around other white dwarfs. Whether studying them singly or in multitudes, such heavy-metal worlds may offer grim previews of our own solar system’s future, when our sun’s fuel runs out some five billion years hence. “It’s really exciting, because this is sort of the missing piece, if you like, [of white dwarf planetary systems],” says Sarah Casewell of the University of Leicester in England, who was not involved in the research. “We know big things can survive, and we know tiny things get destroyed. This is quite a sizable rocky object that has survived.”