CHENNAI: India on April 1 will launch an electronic intelligence satellite Emisat for the Defence Research Development Organisation (DRDO) along with 28 third party satellites and also demonstrate its new technologies like three different orbits with a new variant of PSLV rocket, ISRO said on Saturday.

According to Indian Space Research Organisation (ISRO), a new variant of its Polar Satellite Launch Vehicle (PSLV) rocket will first put the 436 kg Emisat into a 749 km orbit.
Quelle: The Economic Times 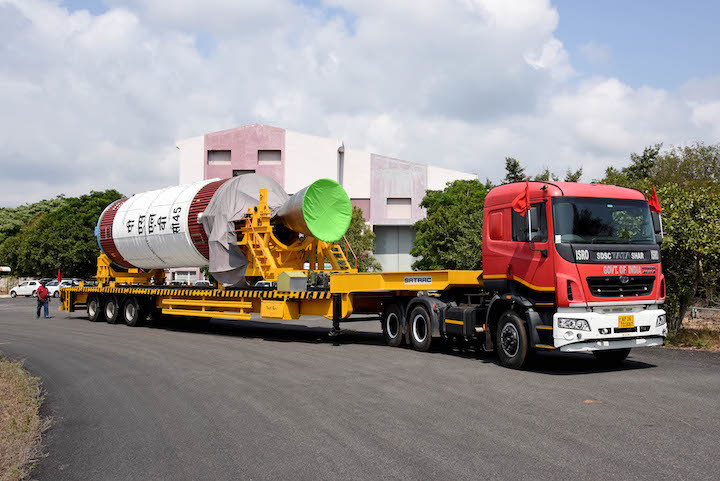 The 28 international customer satellitesare from four countries, viz. Lithuania, Spain, Switzerland and USA. All these satellites are being launched under commercial arrangements. 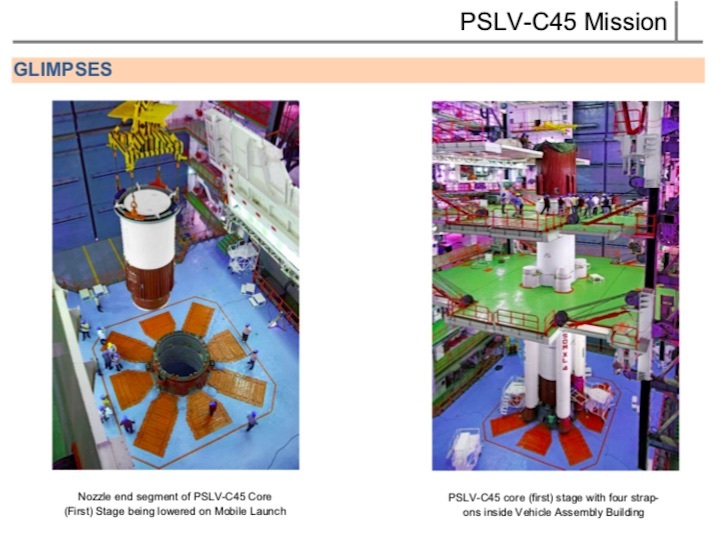 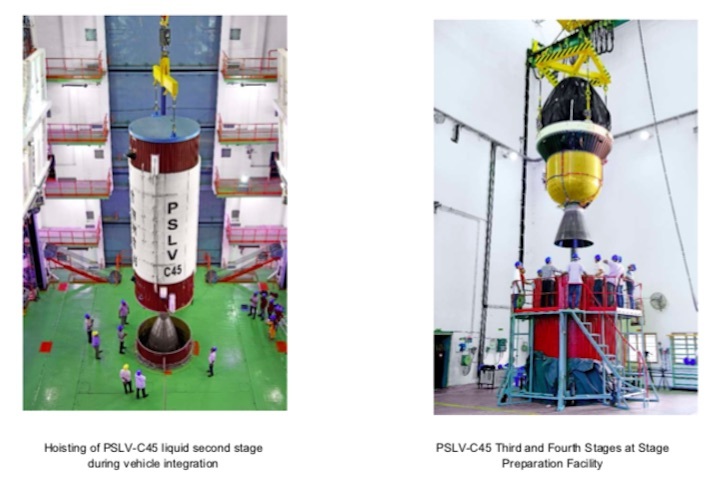 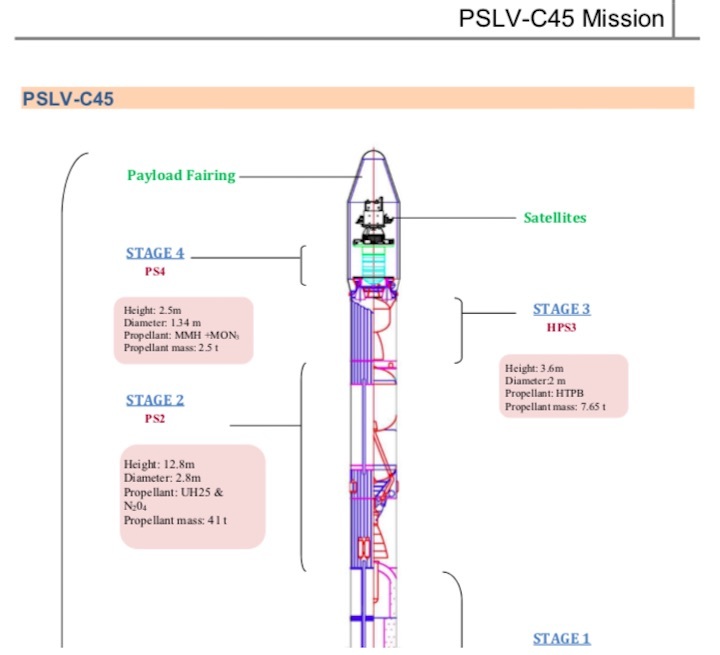 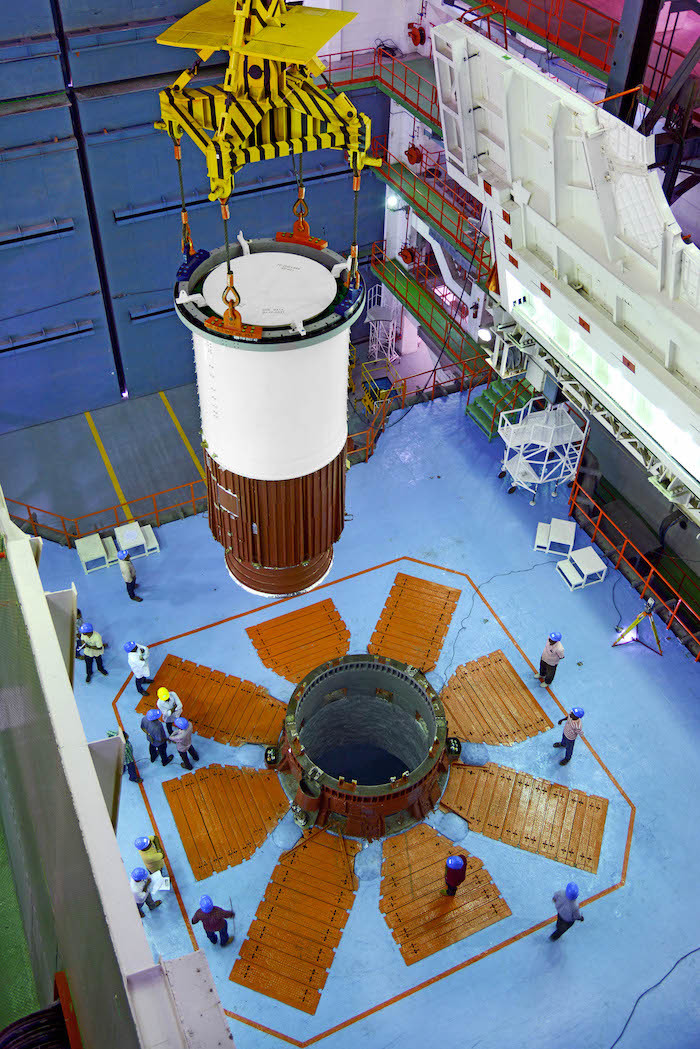 Countdown begins for PSLV-C45 mission with many firsts for ISRO 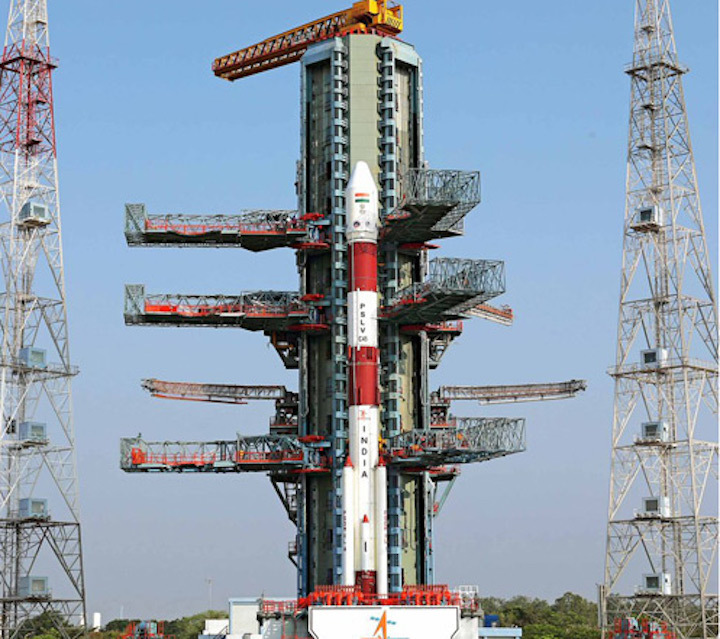 A 27-hour countdown began on Sunday for the launch of India's EMISAT satellite along with 28 nano satellites of global customers from Sriharikota on Monday, a mission which would witness the ISRO placing payloads in three orbits and conducting space experiments for the first time.

The EMISAT satellite is aimed at electromagnetic measurement.

The countdown began at 6.27 am for the launch on board Indian Space Research Organisation's third generation workhorse Polar Satellite Launch Vehicle (PSLV), in its 47th flight, ISRO said.

The four-stage PSLV-C45 will blast off from the second launch pad at the spaceport of Sriharikota, about 125 kms from Chennai, at 9.27 am Monday, agency officials said.

The mission will mark several firsts to the credit of the space agency as it would manoeuvre satellites in various orbits and orbital experiments including on maritime satellite applications.

According to ISRO, a new variant of the rocket PSLV-QL equipped with four Strap-On motors in the first stage is used for the launch.

PSLV, also used in India's two key missions―“Chandrayan” in 2008 and Mars Orbiter in 2013, is a reliable and versatile launch vehicle for ISRO with 39 consecutive successful flights till June, 2017 and five-in-a row from January 2018.

The rocket has encountered only two failures so far―its maiden developmental flight ended unsuccessful way back in 1993. In September, 2017 the flight went off without any hitch but the IRNSS-1H Satellite could not be released into orbit after the PSLV-C39's heat shield failed to open on reaching the orbit.

In Monday's mission, ISRO scientists would place the satellites and payloads in three different orbits, a first for the agency.

After injecting the 436 kg primary satellite EMISAT, intended for electromagnetic spectrum measurement, at around 17 minutes from lift off in a 749 km orbit, they would restart the fourth stage again.

During this initiative, all the other 28 customer satellites, totally weighing about 220 kgs, would be released by lowering the fourth state to around 504 kms orbit.

Again, the fourth stage would be reignited and further lowered to 485 kms orbit to serve as an orbital platform for carrying out space borne experiments for the first time in ISRO's history.

According to ISRO, this is the first time it has been envisaged to provide a micro-gravity environment for research organisations and academic institutes to perform experiments.

The PS4-fourth stage hosts three payloads in this mission.

They are automatic identification system from ISRO for Maritime satellite applications capturing messages transmitted from ships.

Advanced Retarding Potential Analyzer for lonospheric Studies (ARIS) from Indian Institute of Space Science and Technology (IIST) for the structural and composition studies of ionosphere.

The other 28 international satellites―25 3U type, two 6U type and one 2U type nano satellites―are from Lithuania (two), Spain (1), Switzerland (1) and the United States (24).

All these satellites are being launched under commercial arrangements, ISRO said.

The previous launches by ISRO this year include the imaging satellite Microsat-R for military purpose along with 1.2 kg Kalamsat in January onboard PSLV-C44.

The 28 international customer satellitesare from four countries, viz. Lithuania, Spain, Switzerland and USA. All these satellites are being launched under commercial arrangements. 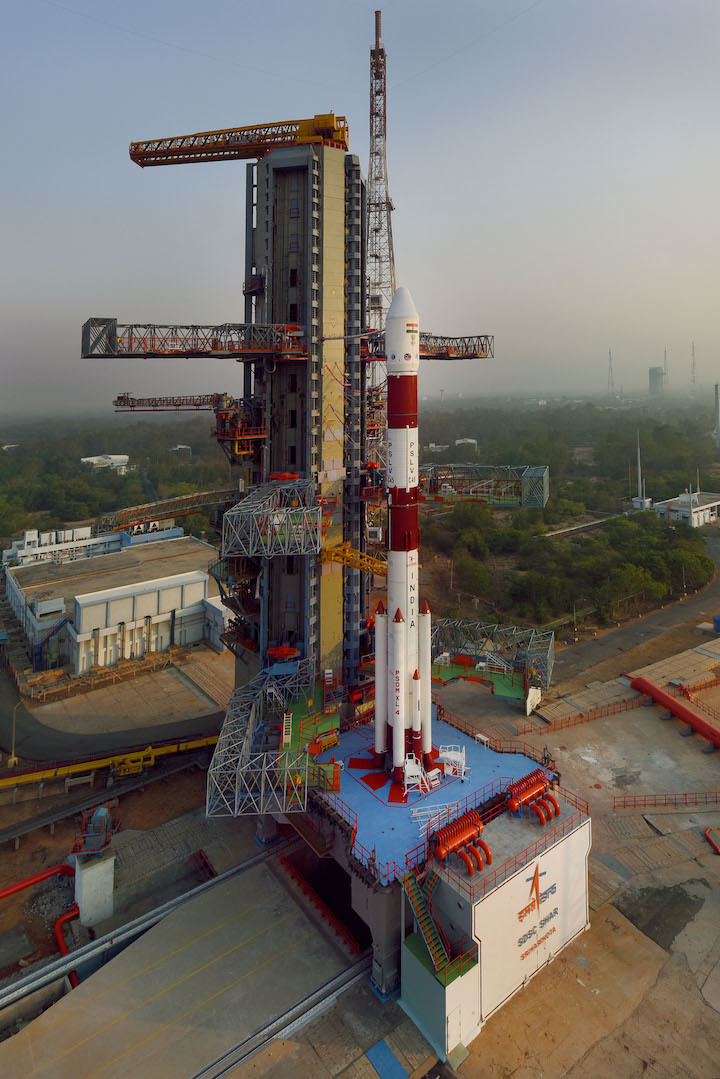 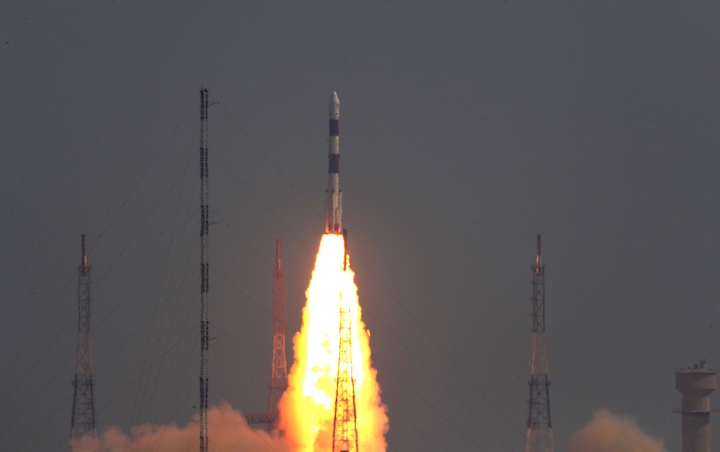 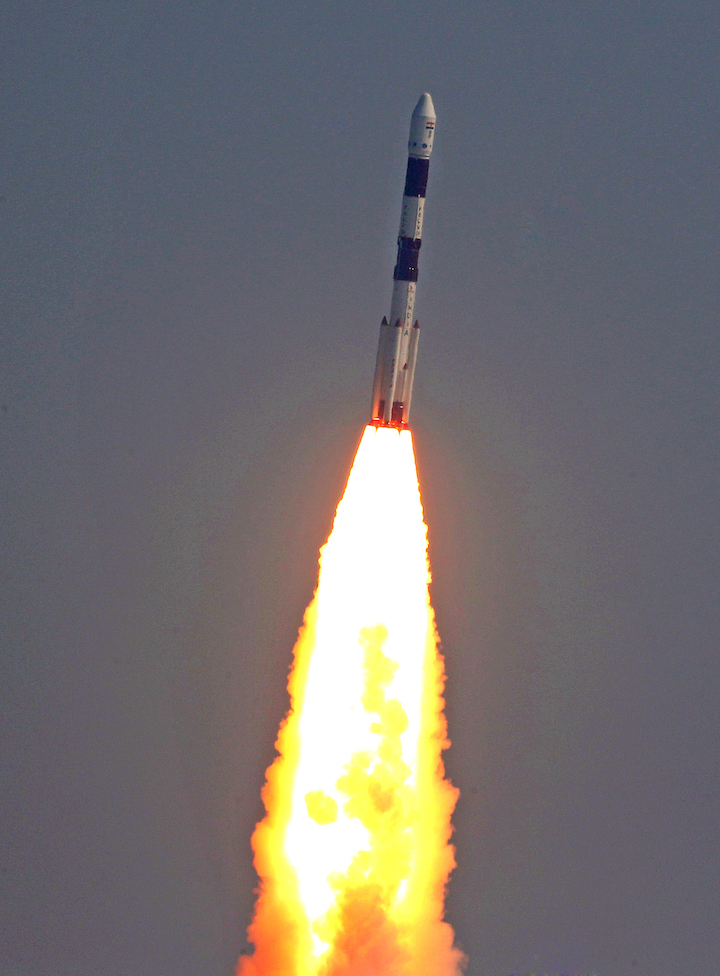 ISRO PSLV-QL Rocket Lifts Off With DRDO Emisat, 28 Other Satellites

A new variant of the India's Polar Satellite Launch Vehicle (PSLV) rocket on Monday carrying the electronic intelligence satellite, Emisat for the Defence Research Development Organisation (DRDO) and 28 other third party satellites lifted off from the second launch pad here.

About 17 minutes into the flight, the rocket would eject the 436 kg Emisat into a 749 km orbit.

"There is increased demand for satellites from strategic sectors. About six/seven satellites are planned to be built," a senior official told IANS on the condition of anonymity.

This will be followed by bringing the rocket down further to 485 km when the fourth stage/engine will turn into a payload platform carrying three experimental payloads: (a) Automatic Identification System (AIS) from ISRO for Maritime satellite applications capturing messages transmitted from ships (b) Automatic Packet Repeating System (APRS) from AMSAT (Radio Amateur Satellite Corporation), India - to assist amateur radio operators in tracking and monitoring position data and (c) Advanced Retarding Potential Analyser for Ionospheric Studies (ARIS) from Indian Institute of Space Science and Technology (IIST) - for the structural and compositional studies of ionosphere, the space agency said.

The whole flight sequence will take about 180 minutes from the rocket's lift off at 9.27 a.m.

The 28 international customer satellites -- 24 from the US, two from Lithuania and one each from Spain and Switzerland -- will weigh about 220 kg.

"It is a special mission for us. We will be using a PSLV rocket with four strap-on motors. Further, for the first time we will be trying to orbit the rocket at three different altitudes," Indian Space Research Organisation Chairman K. Sivan had earlier told IANS.

The PSLV is a four-stage engine expendable rocket with alternating solid and liquid fuel. In its normal configuration, the rocket will have six strap-on motors hugging it's first stage.

But the 44.5 metre tall rocket that lifted off on Monday had four strap-on motors and its configuration is designated as PSLV-QL.