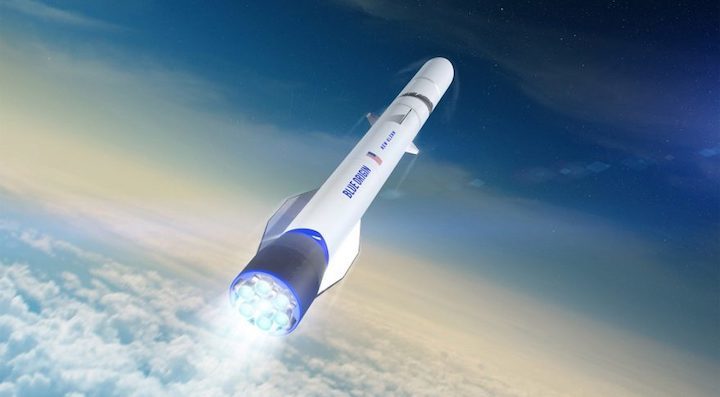 Blue Origin has argued that the Air Force should delay the selection of launch providers and give companies more time to develop their vehicles.

WASHINGTON — Air Force officials are scheduled to meet this week with Undersecretary of Defense for Acquisition and Sustainment Ellen Lord to go over the final details of a solicitation notice for the procurement of national security launch services.

A green light from Lord is the last item on the checklist before the Air Force can issue the final request for industry bids for the Launch Service Procurement, or LSP. This is a high-stakes competition in which only two companies will be selected in 2020 to compete for up to 25 missions over a five-year period.

An Air Force official confirmed to SpaceNews that a meeting with Lord is scheduled for March 28. The Air Force released draft requests for proposals in December and in February, and plans to issue the final RFP on March 29.

The LSP is the first competitive procurement of launch services under the program that used to be called Evolved Expendable Launch Vehicle and was recently renamed National Security Space Launch. NSSL is one of only three Air Force major acquisition programs that require Pentagon approval for critical milestone decisions (the other two are the OCX next-generation operational control system for the GPS constellation and the presidential aircraft recapitalization).

According to sources, the leaders of the Air Force Space and Missile Systems Center and the Air Force’s top acquisition executive Will Roper have signed off on the final LSP solicitation and want to get the program going. Once the final RFP is issued, bids would be due 60 days after.

Air Force officials have cast the LSP as a pivotal step for national security space launch as the Pentagon seeks to tap the capabilities of domestic commercial providers and comply with a legislative mandate to stop using United Launch Alliance’s Atlas 5 rocket which has the Russian RD-180 as its main engine.

“We need to grow a new industry base,” Roper told reporters in October following the announcement that the Air Force was awarding $2.3 billion in Launch Service Agreement development contracts to three rocket manufacturers so they could prepare to compete in the LSP.

The vehicles selected for LSA contracts were Blue Origin’s New Glenn ($500 million), Northrop Grumman’s OmegA ($792 million) and ULA’s Vulcan Centaur ($967 million). LSAs are cost-sharing arrangements — the funding is spread over five years to help the companies pay for the cost of the infrastructure and vehicle modifications that would be required for commercial rockets to be certified to fly national security missions. The companies in turn have to commit to funding a portion of the cost.

Air Force officials expect all three to submit bids for the LSP competition, also known as Phase 2. It’s an open competition so SpaceX, which notably did not win LSA funds, is likely to bid as well although SpaceX supporters on Capitol Hill have warned the Air Force that the company might reconsider its future in the national security market in light of the LSA decision.

“Phase 2 is a full and open competition and having an LSA award is not required to compete,” Roper said in October. He said three companies were selected for LSA awards to “make sure we have competition when we go to Phase 2. We think each competitor has a viable path.”

The Air Force requires all LSA winners to compete for the LSP, or else their cost-sharing partnership with the Air Force would be terminated. Another key twist is that the Air Force will cut of funding to those companies that are not selected for LSP, setting the stage for a competition where the losers end up with no procurement or development money.

The Air Force described the Phase 2 LSP as a “best value source selection.” The first contract award will be given to the “offeror determined to be the best value to the government,” says the draft RFP. The second winner will be selected to ensure the government has “the best portfolio of two launch providers.”

In the draft RFP, the Air Force said the most important of the selection criteria is technical performance such as being able to deliver national security payloads to nine reference orbits around the Earth. Other evaluation criteria include management and business approach, past performance and price, to be prioritized in that order.

But some competitors already have let if be known that they don’t believe this is a fair competition.

Industry sources said Blue Origin for months has been trying to make the case that the LSP decision is being rushed unnecessarily, and that companies should be given more time to develop their vehicles. None of the three LSA competitors, for example, will be ready for their first launch until 2021.

Blue Origin executives have argued that the schedule puts newcomers at a disadvantage, which contradicts the Air Force’s rhetoric about wanting to broaden the launch industrial base. According to industry sources, the company has asked the Air Force to delay the LSP award 12 to 24 months so competitors can more fully develop their rockets and complete infrastructure upgrades. Former Virginia congresswoman Barbara Comstock, now a Blue Origin adviser, in a op-ed published in DefenseOne made the case that the Air Force also should consider selecting three companies, rather than two, for the LSP five-year deal.

“A decision to select just two launch service providers for such an extended period would perpetuate the current market duopoly for national security space launches and eliminate incentives for either provider to compete on price or build a better rocket,” Comstock wrote. “The NSSL was not intended to maintain the status quo.”

Another reason to delay the LSP award, proponents contend, is that the Air Force by narrowing the field to only two players too soon risks losing access to private investment in launch systems. In Blue Origin’s case, the cost of the infrastructure that would be required for New Glenn to launch national security payloads is approximately $1 billion — half of which would be funded with LSA money. But if Blue Origin does’t make the LSP cut, it would no longer get that money and the company’s billionaire founder Jeff Bezos might not continue funding that infrastructure out of its own pocket. When the next LSP competition comes around years from now, even if the company is successful in the commercial launch market, it would not be able to compete if it lacks the infrastructure for national security missions — including launch sites on both the East and West coasts, and facilities for the vertical integration of military payloads.

One industry source said some officials in the Office of the Secretary of Defense would support delaying the LSP vendor selection, something that the Air Force strongly opposes.

An Air Force official said in October that the decision to pick just two companies for the procurement phase would not be reconsidered. “While we want competition, we also need stability in the launch marketplace,” the official told SpaceNews. National security launches are complex and require a high level of mission assurance, he said, and the Air Force needs “well understood partners to work with.”

Following the LSA announcement, Col. Robert Bongiovi, director of the Air Force Space and Missile Systems Center’s Launch Systems Enterprise Directorate, said much thought and deliberation went into the Phase 2 strategy to make sure there is no gap in launch capabilities as new vehicles and providers enter the market. He said the Air Force put together a “very careful strategy to make this transition.”

Randy Kendall, vice president of launch program operations at the Aerospace Corp., said the LSP strategy moves the Air Force closer to achieving its goal of having “reliable and affordable assured access to space.”

The Aerospace Corp. advises and supports the Air Force on all aspects of national security launch, including the certification of new-entrant vehicles. On the upcoming competition, he told SpaceNews, “I think it’s really exciting to have that many options.”

Kendall said the LSP was designed to end up with two domestic commercially viable providers. The RFP says the government will select the  vendors that provide the “best value” to the government. “It’s the government’s decision to determine what is best value,” Kendall said. “It does not mean that incumbents will automatically win. But the government does value things other than purely price.”

The four expected bidders make for a “really interesting mix,” he said. “In the past the field has been pretty narrow.”

ULA has been in the game for a long time, but it’s developing a new vehicle for the LSP with a new engine and propellant choice. “Even the most traditional of the government suppliers is doing something completely new in this competition,” said Kendall.

SpaceX is in an intriguing position of being the “new kid on the block but also an existing supplier with well developed options to support LSP,” he said. “Northrop Grumman is a fairly well known traditional government supplier but also offering a new rocket design.”

As far as Blue Origin and New Glenn, Kendall said, “they’re where SpaceX was a few years ago, coming at it from a completely new angle, with private funding, a new engine, new propellant choices.” The takeaway from this field of competitors, he said, is that “whatever selection the government makes they’ll have incredible access to space, and the government has the luxury of four viable providers.”