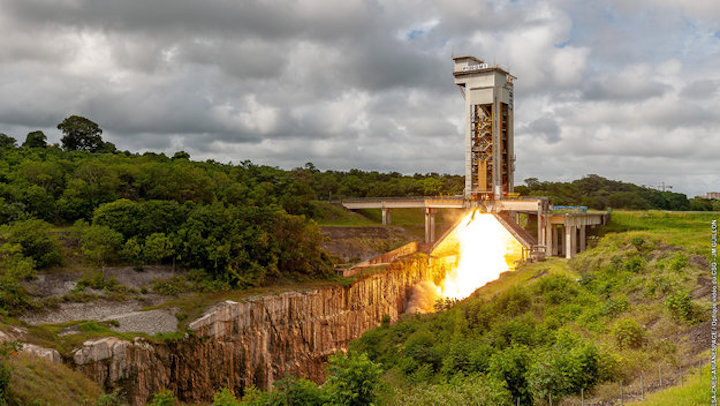 P120C SOLID ROCKET MOTOR TESTED FOR USE ON VEGA-C

The first qualification model of the P120C solid-fuel motor, configured for Vega-C, was static fired yesterday on the test stand at Europe’s Spaceport in French Guiana.

Fully loaded with 142 tonnes of fuel, the 13.5 m long and 3.4 m diameter motor was ignited for a final simulation of liftoff and the first phase of flight.

During a burn time of 135 seconds, the P120C delivered a maximum thrust of about 4650 kN. No anomalies were seen and, according to initial recorded data, the performance met expectations. A full analysis of these test results will confirm readiness of this motor for Vega-C’s debut launch.

The P120C replaces the current P80 as the first stage motor of Vega-C, significantly increasing performance. New features make this motor a proud achievement of European industry. The large motor case made of carbon composite was built in one piece. Advanced manufacturing techniques have been incorporated in horizontal robotic integration of the nozzle, and efficient production has driven down costs in a competitive launchers market.

This hot firing follows the test of the P120C development model in July last year. The second qualification model, configured for Ariane 6, will be tested later this year.

Ariane 6 will also use P120C motors as strap-on boosters, either two or four according to the configuration. Building a common motor for Europe’s next-generation launch vehicles has benefitted development goals and economies of scale, supporting ESA’s goal to maintain independent access to space for Europe.

ESA, France’s CNES space agency, and Europropulsion under contract to Avio and ArianeGroup, collaborated on this test.