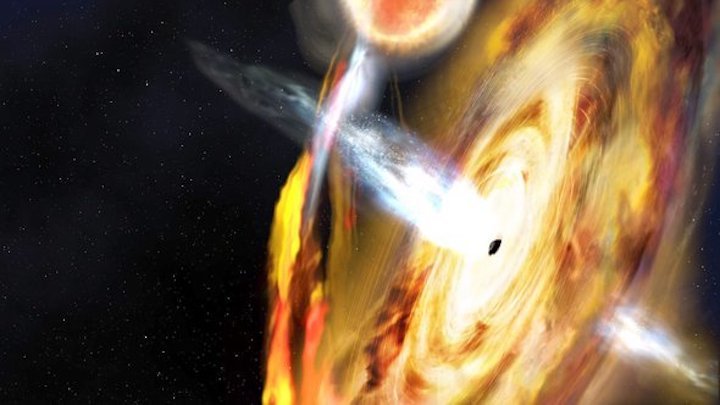 We tend to think black holes gobble up all the matter around them—but they can actually spew out as much as they suck in. And sometimes they seem to go downright crazy.

Astronomers recently spotted one black hole, nearly 10,000 light-years from Earth, belching out an enormous explosion of x-ray light. Measurements of this tantrum have given scientists one of the clearest pictures yet of what happens when black holes erupt with energy. “One of our big questions is how do we go from this process of material flowing into the black hole to this process of flowing out?” says astronomer Erin Kara of the University of Maryland, College Park, lead author of a paper on the findings, published this week in Nature. “We know this is happening but we don’t understand how it works in detail.” Kara presented the discovery Wednesday at the American Astronomical Society’s annual meeting in Seattle.

The outburst began on March 11, 2018, and quickly transformed a black hole that had been totally invisible to telescopes into one of the brightest objects (in terms of x-ray light) in the entire sky. The object, called MAXI J1820+070, was first spotted by the Monitor of All-sky X-ray Image (MAXI) experiment on the International Space Station. Another observatory on the station, the Neutron star Interior Composition Explorer (NICER), monitored the flare with near-daily observations over the next few months.

Not only did astronomers measure the black hole brightening extremely over this time, they also observed what they called “light echoes”—time lags between the x-ray light coming from two different areas around the black hole. Some light travels straight from a region called the corona, made of electrons and other charged particles close in to the black hole. Farther out and perpendicular to the corona is the “accretion disk”—a wider pancake of gas swirling around the hole and falling into it. Other light comes out of the corona and bounces off this disk, arriving at the NICER detectors later. As NICER watched the eruption, the time between echoes became shorter and shorter, indicating the distance between the disk and corona was shrinking. The scientists had evidence the boundaries of the disk were not changing, so they concluded the corona itself must be getting shorter and thus light did not have to travel so far to reach the disk. “This is the clearest detection to date of these light echoes off of the gas falling into a stellar-mass black hole in our own galaxy,” says Dan Wilkins, an astrophysicist at Stanford University who was not involved in the study. “Being able to detect a change in the time delays between the echoes over the course of the outburst means we can start to learn about what is happening around the black hole.”

Zeroing in on the corona is especially helpful because scientists think this region is likely the base from which powerful beams of particles and light, called relativistic jets, are launched. These jets travel close to light-speed and can be spotted coming from black holes across the universe. “The big fun of this paper, from my point of view, is that we really can ‘see’ the corona shrinking during the evolution of the outburst,” says Stephen Eikenberry of the University of Florida, a co-author on the new paper. “I don’t know of any real theoretical prediction for this ‘shrinkage’ nor of any prior observation of it, so this result will already require overhauling of the theories we have for jet formation.”

Astronomers hope NICER, which launched in June 2017, and other new observatories will observe many more outbursts in the future and help fill in the missing details of erupting black holes. “It’s a really exciting time to be doing this,” says Joey Neilsen, a physicist at Villanova University and a co-author of the new paper. “We’re getting to a point where the observations are actually ahead of the theory. New missions are allowing us to see things that we hadn’t necessarily thought of before.”