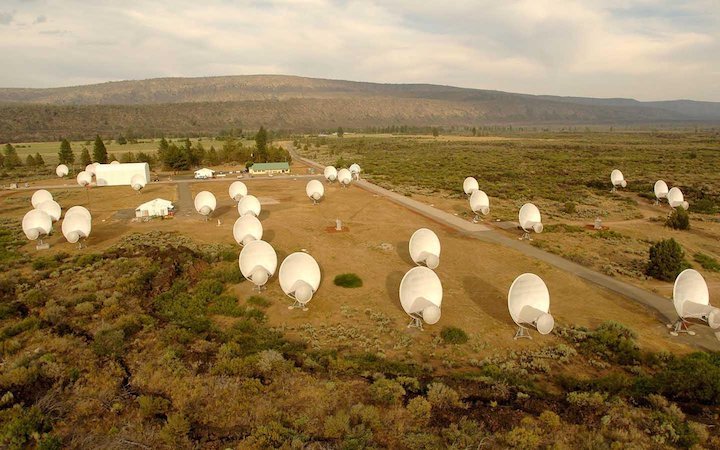 A view of the Allen Telescope Array in California.

With research on extraterrestrial life continuing across the world, a noted researcher from the Search for Extraterrestrial Intelligence (SETI) Institute launched a new tool to help researchers keep track of results.

Jill Tarter, a co-founder of the institute who inspired the fictional character Ellie Arroway in the Carl Sagan novel "Contact" (which later became a 1997 movie), led the development of a newly announced web tool called Technosearch. This database includes all published SETI searches between 1960 and the present day. You can view the database online at https://technosearch.seti.org/.

Ina Jan. 9 statement announcing the database, SETI representatives said that they hope the entire SETI community will work together to keep Technosearch accurate and up to date. The tool is meant to address the ongoing need in the community for a resource representing the hundreds of searches conducted in the sky. [13 Ways to Search for Intelligent Aliens]

"I started keeping this search archive when I was a graduate student," Tarter said in the statement. "Some of the original papers were presented at conferences or appear in obscure journals that are difficult for newcomers to the SETI field to access. I'm delighted that we now have a tool that can be used by the entire community and a methodology for keeping it current."

Technosearch was developed in collaboration with Research Experience for Undergraduates (REU) interns, who were working under Jason Wright — an exoplanet and star researcher at Penn State University. One of those former REU students, Andrew Garcia, said the new tool will play a big role in SETI.

"I've become convinced that Technosearch will become an important instrument for astronomers and amateurs interested in exploring the cosmos for indications of other technological civilizations," Garcia said in the statement. "We can't know where to look for evidence tomorrow if we don't know where we have already looked."

Technosearch was released yesterday (Jan. 9) at the 223rd meeting of the American Astronomical Society during a poster session.

Could extraterrestrial civilizations leave their fingerprints as chlorofluorocarbons in planetary atmospheres, or the waste heat generated by industrial processes, or artificial bursts of neutrinos or gravitational waves?

That’s what a vanguard of astronomers would like to find out, and they’re hoping to win more support for an approach that widens the nearly 60-year-old search for alien radio signals to include other alien indicators.

Those indicators — which could include anomalous chemicals in exoplanet atmospheres or readings that hint at the presence of alien megastructures — have come to be known collectively as technosignatures. It’s a term that originated with Jill Tarter, one of the pioneers in the search for extraterrestrial intelligence, or SETI.

“When the astrobiology people started talking about ‘biosignatures,’ it just seemed obvious,” Tarter told GeekWire this week at the American Astronomical Society’s winter meeting in Seattle.

Tarter said the term crystallizes the idea that scientists should look for a variety of technological traces potentially pointing to intelligent life beyond Earth.

“We’re really talking about more than just searching for radio signals or optical signals,” she said. “What is it that technology does to modify its environment in a way that we can detect over interstellar distances, and distinguish from what life does?”

Such a search could well draw upon scientific instruments that were designed for other purposes. “There are so many instruments we’re going to build, and if you only opened your mind and thought about different ways we can use them, there’s a lot you could do,” Tarter said.

Jason Wright, an astronomer at Penn State University, is one of the leaders of the campaign to raise the status of the search for technosignatures.

“The sense I get is that there’s been an attitude change,” he said.

He speculated that the growing popularity of geek culture may have helped heighten interest in a wider search for signs of extraterrestrial intelligence.

“Going from geek culture to pop culture made it OK to talk about it without the cool kids sneering,” he said.

Three years ago, Wright threw a spotlight on the issue when he suggested that a distant star’s anomalous pattern of brightening and dimming just might point to the presence of an alien megastructure — an energy-generating “Dyson sphere” built around the star by a super-advanced civilization.

Wright and his colleagues eventually concluded that the most likely explanation involved clouds of dust that dimmed the starlight. Nevertheless, the alien-megastructure debate generated additional buzz for the technosignature concept.

Last year, legislation was introduced in Congress to set aside $10 million in NASA’s annual budget to support the search for technosignatures. NASA picked up on that cue, and organized a conference in September that surveyed the field. The space agency’s associate administrator for science, Thomas Zurbuchen, tweeted his support for the concept, and Wright helped edit the resulting report.

Now Wright, Tarter and other technosignature-seekers are working to have the concept incorporated into the Astro2020 Decadal Survey, a 10-year roadmap for research that will be prepared under the auspices of the National Academies.

Over the next few months, astronomers from across the country will be forming committees to identify priorities for future projects in astronomy and astrophysics. Their lists of priorities will be given a lot of weight when policymakers decide which missions to fund in the years ahead.

During this week’s AAS meeting, about 10 researchers gathered in a conference room at the Washington State Convention Center to work out strategies for addressing technosignatures in the Decadal Survey.

“For me, the bottom line is that the search for technosignatures is a scientific priority for NASA and the National Science Foundation,” Wright said.

Shelley Wright, an astrophysicist at the University of California at San Diego (and no relation to Jason Wright) noted that “there’s actually been a huge amount of work in this field in the last decade.”

“We need to highlight that, at all wavelengths,” she said, “both in terms of existing facilities and then in terms of dedicated facilities.”

As an example, she pointed to the study of fast radio bursts, a new frontier in astrophysics that opened up when astronomers realized that radio telescopes could be used in novel ways.

“Even the process of thinking or doing technosignatures has a very high reward in serendipitous discovery of natural phenomena,” she said.

Shelley Wright is particularly interested in how multi-messenger astronomy could take advantage of gravitational-wave detectors and neutrino detectors to boost the telescope-based search for technosignatures. Jason Wright, meanwhile, wonders whether space-based observatories like the European Space Agency’s star-mapping Gaia satellite could pick up on the heat signature of extraterrestrial civilizations.

Spacecraft that look for planets beyond our solar system, such as NASA’s Transiting Exoplanet Survey Satellite (a.k.a. TESS), could be programmed to flag anomalies for follow-up study, and artificial intelligence could be enlisted to sift through terabytes’ worth of radio and optical readings.

In the years ahead, keeping track of all the ways to check for technosignatures may turn out to be one of the key challenges. Tarter and an undergraduate researcher from San Francisco State University, Andrew Garcia, have built a software tool called Technosearch that organizes decades’ worth of SETI studies into a searchable database.

“The big question that SETI is trying to answer is, ‘Are we alone?’ If we want a meaningful answer, it’s going to take multiple generations to complete,” Garcia explained. “So the question is, how do we get astronomers four generations from now to know what we looked at today? Technosearch is trying to do this by being an archive where observers can add their own search.”

The research doesn’t have to be right, but it has to be published, Garcia said. One of his favorite examples is a paper written in the 1960s by Russian astrophysicist Nikolai Kardashev that misidentified synchrotron emissions as signals from an alien civilization.

Perhaps the best thing about the SETI Institute’s Technosearch tool is that the code can be updated to add any kind of technosignature that scientists start looking for in the decades ahead, whether it’s gravitational waves, neutrinos or alien megastructures.

“All we have to do is slap in a new list,” Garcia said.

Astronomie - Is Anyone Out There? New SETI Tool Keeps Track of Alien Searches
2326 Views
Created with page4