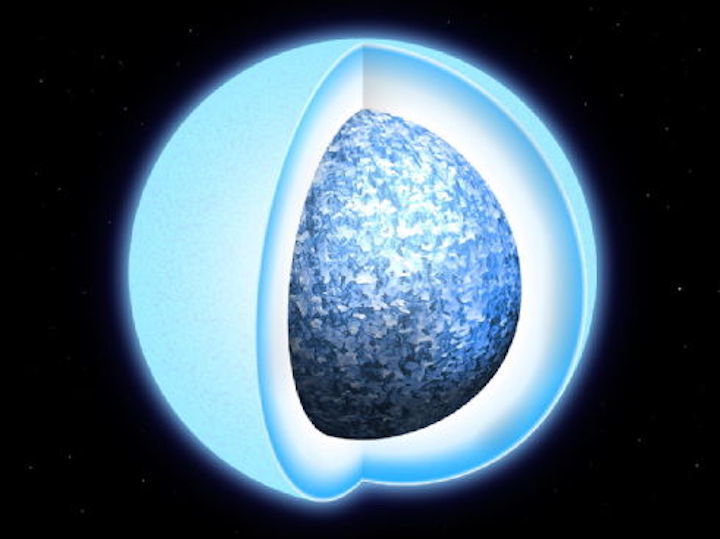 The first direct evidence of white dwarf stars solidifying into crystals has been discovered by astronomers at the University of Warwick, and our skies are filled with them.

Observations have revealed that dead remnants of stars like our Sun, called white dwarfs, have a core of solid oxygen and carbon due to a phase transition during their lifecycle similar to water turning into ice but at much higher temperatures. This could make them potentially billions of years older than previously thought.

The discovery, led by Dr Pier-Emmanuel Tremblay from the University of Warwick’s Department of Physics, has been published in Nature and is largely based on observations taken with the European Space Agency’s Gaia satellite (http://www.esa.int/Our_Activities/Space_Science/Gaia).

White dwarf stars are some of the oldest stellar objects in the universe. They are incredibly useful to astronomers as their predictable lifecycle allows them to be used as cosmic clocks to estimate the age of groups of neighboring stars to a high degree of accuracy. They are the remaining cores of red giants after these huge stars have died and shed their outer layers and are constantly cooling as they release their stored up heat over the course of billions of years.

The astronomers selected 15,000 white dwarf candidates within around 300 light years of Earth from observations made by the Gaia satellite and analysed data on the stars’ luminosities and colours.

They identified a pile-up, an excess in the number of stars at specific colours and luminosities that do not correspond to any single mass or age. When compared to evolutionary models of stars, the pile-up strongly coincides to the phase in their development in which latent heat is predicted to be released in large amounts, resulting in a slowing down of their cooling process. It is estimated that in some cases these stars have slowed down their aging by as much as 2 billion years, or 15 percent of the age of our galaxy.

Dr Tremblay said: “This is the first direct evidence that white dwarfs crystallise, or transition from liquid to solid. It was predicted fifty years ago that we should observe a pile-up in the number of white dwarfs at certain luminosities and colours due to crystallisation and only now this has been observed.

“All white dwarfs will crystallise at some point in their evolution, although more massive white dwarfs go through the process sooner. This means that billions of white dwarfs in our galaxy have already completed the process and are essentially crystal spheres in the sky. The Sun itself will become a crystal white dwarf in about 10 billion years.”

Crystallisation is the process of a material becoming a solid state, in which its atoms form an ordered structure. Under the extreme pressures in white dwarf cores, atoms are packed so densely that their electrons become unbound, leaving a conducting electron gas governed by quantum physics, and positively charged nuclei in a fluid form. When the core cools down to about 10 million degrees, enough energy has been released that the fluid begins to solidify, forming a metallic core at its heart with a mantle enhanced in carbon.

Dr Tremblay adds: “Not only do we have evidence of heat release upon solidification, but considerably more energy release is needed to explain the observations. We believe this is due to the oxygen crystallising first and then sinking to the core, a process similar to sedimentation on a river bed on Earth. This will push the carbon upwards, and that separation will release gravitational energy.

“We’ve made a large step forward in getting accurate ages for these cooler white dwarfs and therefore old stars of the Milky Way. Much of the credit for this discovery is down to the Gaia observations. Thanks to the precise measurements that it is capable of, we have understood the interior of white dwarfs in a way that we never expected. Before Gaia we had 100-200 white dwarfs with precise distances and luminosities – and now we have 200,000. This experiment on ultra-dense matter is something that simply cannot be performed in any laboratory on Earth.”

The research was funded by the European Research Council. GAIA REVEALS HOW SUN-LIKE STARS TURN SOLID AFTER THEIR DEMISE

Data captured by ESA’s galaxy-mapping spacecraft Gaia has revealed for the first time how white dwarfs, the dead remnants of stars like our Sun, turn into solid spheres as the hot gas inside them cools down.

This process of solidification, or crystallisation, of the material inside white dwarfs was predicted 50 years ago but it wasn’t until the arrival of Gaia that astronomers were able to observe enough of these objects with such a precision to see the pattern revealing this process.

"Previously, we had distances for only a few hundreds of white dwarfs and many of them were in clusters, where they all have the same age," says Pier-Emmanuel Tremblay from the University of Warwick, UK, lead author of the paper describing the results, published today in Nature.

"With Gaia we now have the distance, brightness and colour of hundreds of thousands of white dwarfs for a sizeable sample in the outer disc of the Milky Way, spanning a range of initial masses and all kinds of ages."

It is in the precise estimate of the distance to these stars that Gaia makes a breakthrough, allowing astronomers to gauge their true brightness with unprecedented accuracy. White dwarfs are the remains of medium-sized stars similar to our Sun. Once these stars have burnt all the nuclear fuel in their core, they shed their outer layers, leaving behind a hot core that starts cooling down.

These ultra-dense remnants still emit thermal radiation as they cool, and are visible to astronomers as rather faint objects. It is estimated that up to 97 per cent of stars in the Milky Way will eventually turn into white dwarfs, while the most massive of stars will end up as neutron stars or black holes.

The cooling of white dwarfs lasts billions of years. Once they reach a certain temperature, the originally hot matter inside the star’s core starts crystallising, becoming solid. The process is similar to liquid water turning into ice on Earth at zero degrees Celsius, except that the temperature at which this solidification happens in white dwarfs is extremely high – about 10 million degrees Celsius.

In this study, the astronomers analysed more than 15 000 stellar remnant candidates within 300 light years of Earth as observed by Gaia and were able to see these crystallising white dwarfs as a rather distinct group. “We saw a pile-up of white dwarfs of certain colours and luminosities that were otherwise not linked together in terms of their evolution,” says Pier-Emmanuel.

“We realised that this was not a distinct population of white dwarfs, but the effect of the cooling and crystallisation predicted 50 years ago.”

The heat released during this crystallisation process, which lasts several billion years, seemingly slows down the evolution of the white dwarfs: the dead stars stop dimming and, as a result, appear up to two billion years younger than they actually are. That, in turn, has an impact on our understanding of the stellar groupings these white dwarfs are a part of.

“White dwarfs are traditionally used for age-dating of stellar populations such as clusters of stars, the outer disc, and the halo in our Milky Way,” explains Pier-Emmanuel.

“We will now have to develop better crystallisation models to get more accurate estimates of the ages of these systems.”

Not all white dwarfs crystallise at the same pace. More massive stars cool down more rapidly and will reach the temperature at which crystallisation happens in about one billion years. White dwarfs with lower masses, closer to the expected end stage of the Sun, cool in a slower fashion, requiring up to six billion years to turn into dead solid spheres.

“This result highlights the versatility of Gaia and its numerous applications,” says Timo Prusti, Gaia project scientist at ESA.

“It’s exciting how scanning stars across the sky and measuring their properties can lead to evidence of plasma phenomena in matter so dense that cannot be tested in the laboratory.”