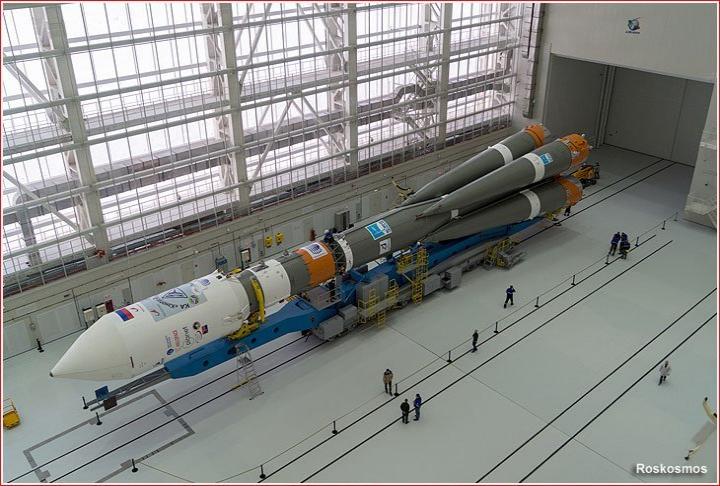 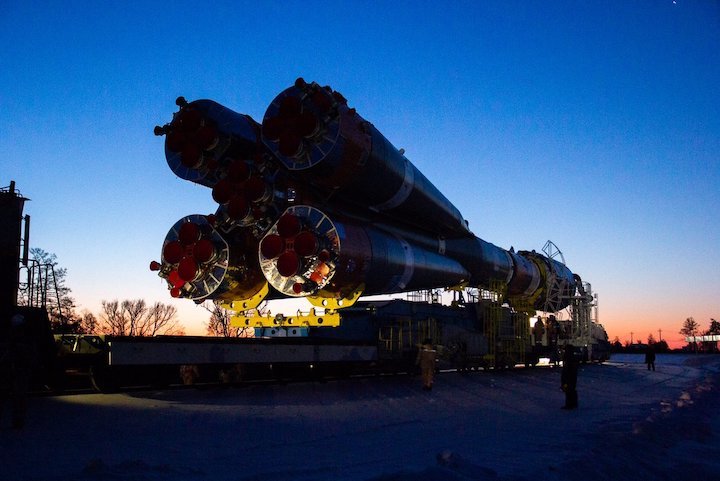 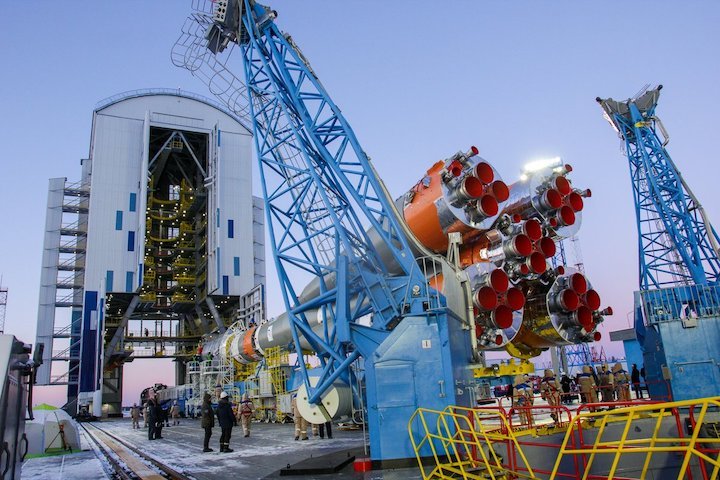 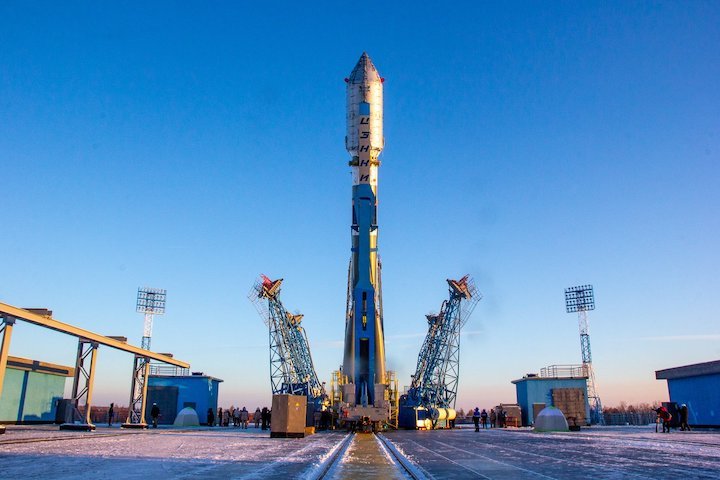 A Soyuz-2.1a carrier rocket has been installed on the Vostochny spaceport’s launch pad, a TASS correspondent reported. The rocket carrying the Kanopus-V-5 and 6 remote sensing satellites and 26 foreign satellites is scheduled to be launched on December 27.

The testing of the Kanopus-V satellites was successfully completed earlier.

The Kanopus-V satellites are designed to monitor man-made and natural disasters. Using several satellites at a time will make it possible to increase the monitoring frequency and accelerate access to information from the satellites.

This is going to be the fourth launch from the Vostochny spaceport in Russia’s Far East. The previous launch took place on February 1, 2018, when a Soyuz-2.1a rocket delivered to orbit the Kanopus-V-3 and 4 satellites. The Kanopus-V-1 satellite, launched from the Baikonur spaceport in 2012, still operates in orbit. 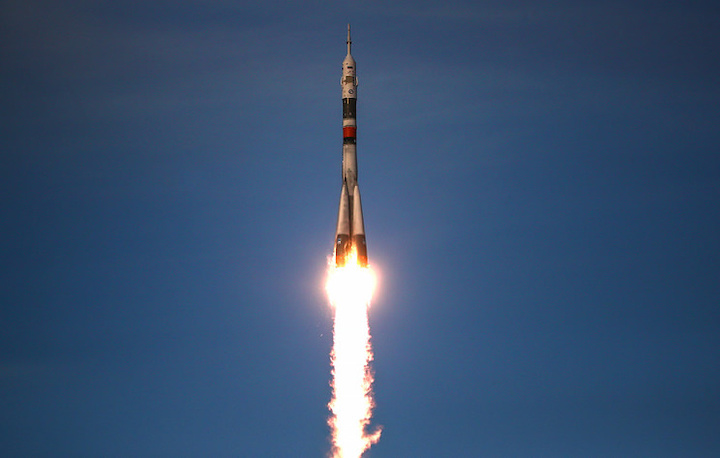 The Soyuz-2.1a carrier rocket with two Kanopus-V remote sensing satellites and 26 small foreign spacecraft has been launched from the Vostochny spaceport on Thursday, a TASS correspondent reported.

Nine minutes after the launch, the Fregat upper stage with all spacecraft will separate from the third stage of the rocket carrier. In about an hour after that, the Fregat will deliver Kanopus-V satellites and 26 foreign spaceraft to the orbit.

Kanopus-V satellites will monitor technogenic and natural disasters and emergencies.

Among foreign spacecraft that will be delivered to the orbit are Japan's GRUS spacecraft, 12 US Dove satellites, South Africa's ZACube-2 spacecraft, Spain's KA Lume-1, Germany's satellites D-Star ONE (iSat), D-Star ONE (Sparrow) and UWE-4, as well as 8 US Lemur spacecraft.

This was the fourth launch from the Vostochny spaceport in Russia's Far East. 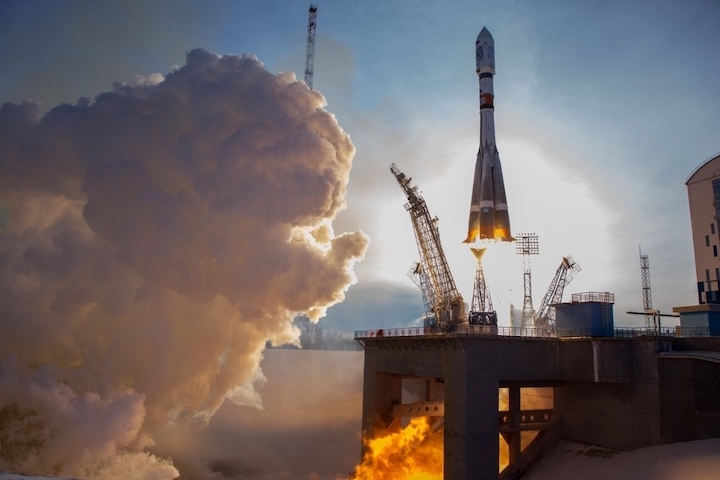 Russia’s last satellite launch of 2018 saw a Soyuz rocket lift off from the Vostochny Cosmodrome Thursday, delivering a pair of Kanopus-V remote sensing satellites and twenty-six secondary payloads to orbit with the aid of a Fregat upper stage. Soyuz launched at 11:07 local time (02:07 UTC) with separation of its primary payload confirmed ahead of the deployment of the cubesats.

The Kanopus-V No.5 and No.6 satellites will join a constellation of six civilian Earth imaging satellites operated by the Russian Federal Space Agency, Roskosmos. Kanopus-V, or Kanopus-Vulkan, spacecraft carry a compliment of three sensors to image the Earth at visible-light and near infrared wavelengths.

The Kanopus satellites were built by NPP VNIIEM in cooperation with British satellite manufacturer Surrey Satellite Technology Limited (SSTL). With a mass of 473 kilograms (1,043 lb), each satellite is based on a bus that was specifically designed for the programme. The satellites are expected to operate for at least five years.

Kanopus-V No.5 and No.6 will join four satellites already operating in sun-synchronous orbit. The first Kanopus-V satellite was launched by a Soyuz-FG/Fregat rocket in July 2012 alongside BKA, a nearly-identical satellite developed for Belarus. Kanopus-V No.2 was modified to incorporate an additional infrared payload, launching in July 2017 as Kanopus-V-IK. The third and fourth satellites were launched together earlier this year. 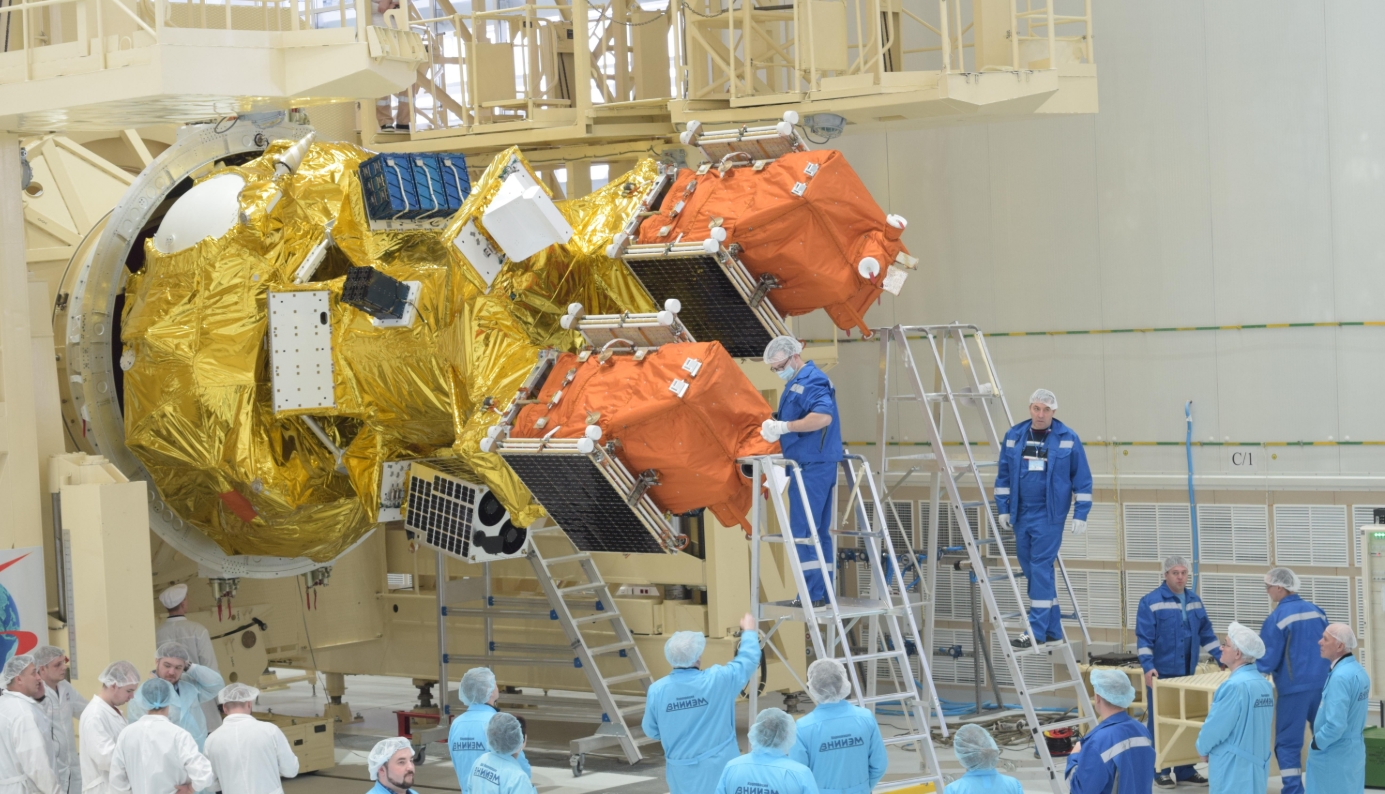 The two Kanopus-V satellites during encapsulation – via Roscosmos

An additional Kanopus satellite, Kanopus-ST, was intended to perform an ocean survey mission. This satellite was lost after it failed to separate from the upper stage of a Soyuz-2-1v/Volga rocket in 2015.

As well as the two Kanopus spacecraft, Thursday’s launch carried twenty-six secondary payloads – smaller satellites taking advantage of excess capacity on the rocket for a ride into orbit. These were contracted through Roskosmos’ commercial arm – Glavkosmos – and GK Launch Services, a partnership between Glavkosmos and ISC Kosmotras who formerly contracted commercial launches of Dnepr rockets.

The largest of the secondary payloads aboard Soyuz is the 100-kilogram (220 lb) GRUS-1 satellite that is being flown for Japan’s Axelspace. GRUS-1 is the first of three Earth-imaging satellites that Axelspace is developing to collect high-resolution images of the Earth’s surface. GRUS-1 will operate for at least five years, taking images at resolutions of up to 2.5 meters (8.2 feet) with a swath width of 60 kilometers (37 miles). 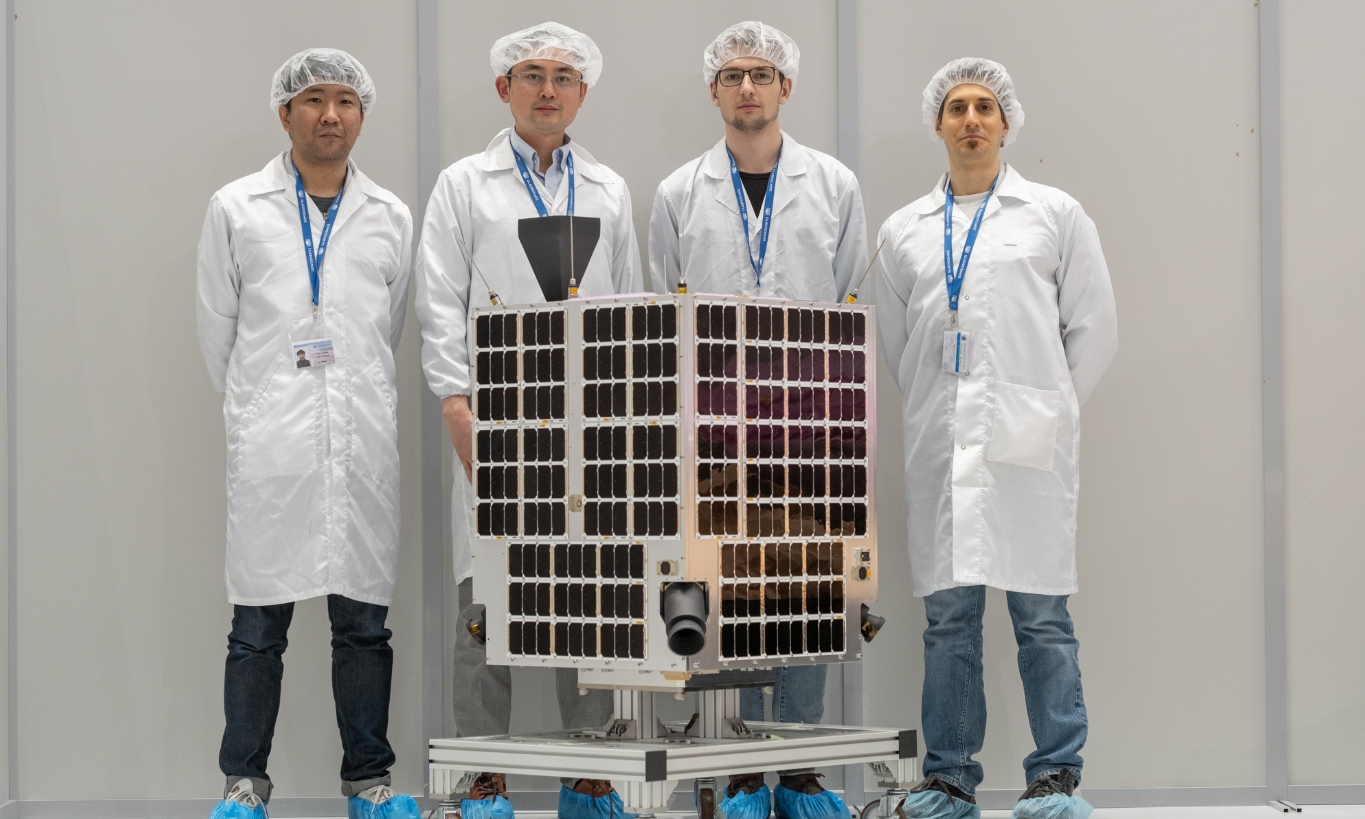 The remaining satellites were all built to the CubeSat standard. Fourteen were contracted through Swiss company Innovative Solutions in Space (ISIS) as ISILaunch-24. These include Flock-3k, twelve three-unit CubeSats that will join Planet Labs’ constellation which has already seen hundreds of imaging satellites launched.

South Africa’s ZACube-2 is another three-unit CubeSat which will be operated by the Cape Peninsula University of Technology’s French South African Institute of Technology (FSATI) to test a software defined radio (SDR) payload in orbit. The satellite will demonstrate using SDR to track ships and relay their signals.

Lume 1, a two-unit CubeSat developed by a consortium of European universities and research institutions led by Spain’s University of Vigo. Lume carries a communications payload that will relay signals from sensors on the ground that have been placed to detect fires. The satellite can also relay data collected by drones sent to investigate alerts from these sensors, improving advance warning of fires breaking out. 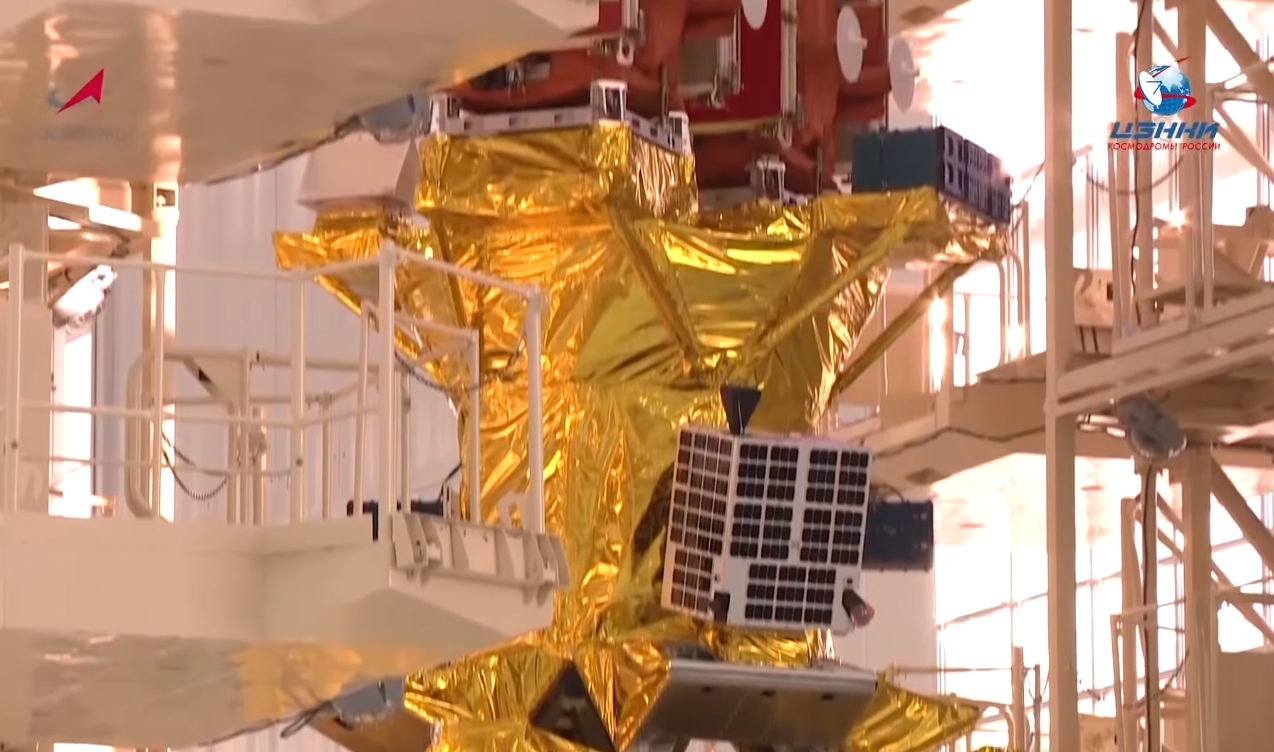 Some of the additional passengers on the payload adaptor – via Roscosmos

Two satellites built by German Orbital Systems joined the launch. Both are based on the D-Star One three-unit CubeSat which was demonstrated earlier this year. The iSat spacecraft is equipped with an ADS-B received to relay tracking data from aircraft. iSat will be operated by iSky Technology of the Czech Republic, but was procured under a delivery in orbit contract whereby the manufacturer retains responsibility for the spacecraft until it reaches space and completes on-orbit checkout. German Orbital Systems’ own satellite – D-Star ONE Sparrow – carries technology demonstration and amateur radio payloads.

The University of Wurzburg’s UWE-4 is a single-unit CubeSat which will test a miniaturized electric propulsion system with Nano Field Effect Electric Propulsion (NanoFEEP) thrusters.

A Soyuz-2-1a rocket with a Fregat-M upper stage was used for the Kanopus launch. This is a modernized version of Soyuz that was first flown in 2004, but traces its heritage back to Sergei Korolev’s R-7 missile. First flown in May 1957, R-7 was the world’s first intercontinental ballistic missile and, with modifications, was used to launch Sputnik five months later. The R-7 has provided the basis for several series of rockets developed by the Soviet Union and later Russia, however Soyuz is the only one of these lines still flying.

Soyuz lifted off from the Vostochny Cosmodrome in Eastern Russia. Located in the Amur Oblast region, the Cosmodrome was constructed on the site of the former Svobodny missile base and opened with the successful launch of a Soyuz rocket in April 2016. 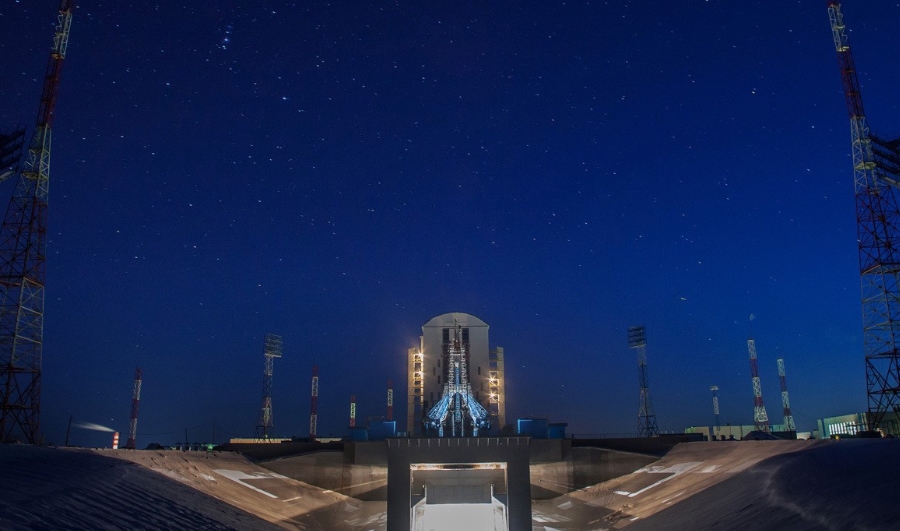 Vostochny is intended to reduce Russia’s dependence on the Baikonur Cosmodrome, which is currently leased from Kazakhstan. The Soyuz launch complex, Pad 1S, is currently the only operational launch pad at Vostochny, however a new pad for the Angara rocket is under construction for future launches.

Compared to the pervious-generation Soyuz-U, Soyuz-2-1a replaced the rocket’s analog flight control systems with digital versions and incorporated upgraded first and second stage engines. A further-upgraded Soyuz-2-1b configuration incorporates a re-engined third stage, while the smaller Soyuz-2-1v omits the first stage and replaces the second stage engine – its first stage – with an NK-33 left over from the N-1 programme of the late 1960s.

Soyuz itself is a three-stage rocket, but is often flown with an additional upper stage to reach higher orbits or perform more complex deployment missions. For Thursday’s launch, which is targeting a sun-synchronous orbit, a Fregat-M upper stage is being used to complete orbital insertion and to disperse the secondary payloads into their planned orbit. The three stages of Soyuz burn RG-1 – a form of rocket-grade kerosene – and liquid oxygen, while Fregat uses storable hypergolic propellants.

The first and second stages of Soyuz both ignited while the rocket is still on the launch pad, about sixteen seconds before liftoff. The engines build up to full thrust, reaching maximum output about a second before the launch pad’s swing arms open and Soyuz begins its ascent. The first stage consists of four boosters powered by RD-107A engines, which burn together with the second stage’s single RD-108A for the first 118 seconds of flight. 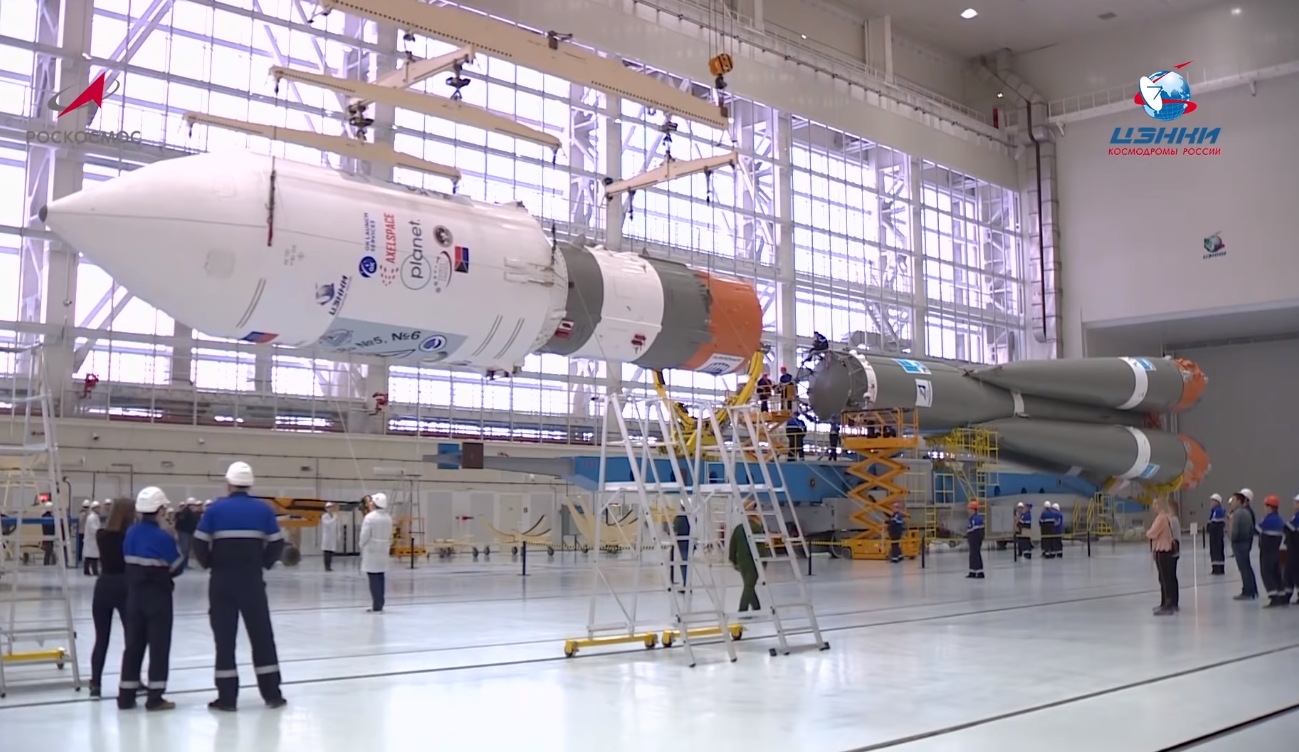 The Soyuz 2-1A during integration – via Roscosmos

Once Thursday’s mission reached the end of first-stage flight the RD-107A engines shut down and the four boosters separated, venting residual oxidizer to push them away from the rest of the vehicle. When executed correctly, this process produces a visual effect known as the Korolev Cross, where the four boosters tumble away from the core second stage. During October’s launch of the Soyuz MS-10 mission to the International Space Station one of the boosters failed to vent and collided with the second stage, resulting in a launch failure and the ballistic reentry of the aborted mission for its crew.

Following first stage separation, the second stage continued to fire its engine for about two minutes and 50 seconds. The second stage’s RD-108A is nearly identical to the first stage RD-107A engines, but incorporates vernier thrusters to provide attitude control as Soyuz continues its climb towards orbit. Late in second-stage flight, with Soyuz already flying through space, the payload fairing separated from the nose of the rocket.

Shortly before second stage burnout, the third stage of the Soyuz rocket ignited its RD-0110 engine and separated. The third stage burned for a little over four minutes, after which Fregat separated to complete orbital insertion. The first Fregat burn began a few seconds after separation from the Soyuz, firing for around 55 seconds to place itself and the payload into their initial parking orbit.

Fregat fired its S5.98M engine a second time after a coast of about 45 minutes to circularise its orbit ahead of deploying the two Kanopus-V satellites. The first satellite separated about 100 seconds after the burn was completed, the second was deployed a little under six minutes later. With its primary payload deployed, Fregat was tasked with two further burns to ensure the remaining spacecraft are deployed away from the Kanopus satellites. After deploying all of its payloads, Fregat will be deorbited.

Thursday’s launch follows the previous Kanopus launch in February, which was Russia’s first of the year. These two missions bookend a year in which Russian rockets have made twenty orbital launch attempts, sixteen of which have used the Soyuz rocket. The four remaining launches were shared evenly between Rokot and Proton vehicles. Russia’s only launch failure of the year was of the Soyuz MS-10 mission in October.

Worldwide, the Kanopus mission was the 113th launch of the year. Russia’s total of 20 launches is the third-most of any country behind the People’s Republic of China and the United States. China’s count of thirty-seven launches, with a thirty-eighth scheduled, sees it top global listings for the first time. The United States has made thirty-four launches, and also has another scheduled before the end of the year.

The next Russian launch is currently targeting 7 February, when a Soyuz-2-1b rocket with a Fregat-M upper stage will deploy the EgyptSat-A spacecraft in a mission from the Baikonur Cosmodrome.