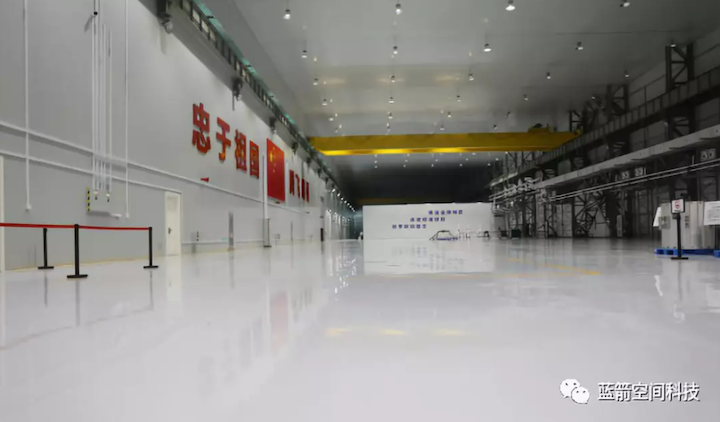 The base, located in Zhejiang Province, will see production of Landspace's Zhuque-2 (ZQ-2) liquid methane and liquid oxygen launch vehicle.

Zhang Changwu, founder and CEO of Beijing-based Landspace, told Chinese media on Thursday that the base was currently being used to conduct technical tests on new rocket engines.

The facility will boast the capacity to produce 15 ZQ-2 launch vehicles and 200 methalox rocket engines annually by 2022, according to Zhang.

According to ECNS, a senior manager at Landspace said the reasons behind the company setting up a factory in Huzhou include the fact that the city has been a testing base for state-owned space contractors for a long time, while the local government is supportive of private businesses and is eager to upgrade local industries.

The exterior of Landspace's intelligent manufacturing base in Huzhou, Zhejiang Province. Landspace

Landspace in November secured 300 million yuan (US$43.2m) in B+ round financing for development of its Zhuque-2 rocket, which it aims to debut in 2020.

The two-stage Zhuque-2 launch vehicle will be 48.8-metres tall, have a 3.35-metre diameter and be capable of delivering a 4,000-kilogramme payload capacity to a 200-km low Earth orbit (LEO) and 2,000 kilogrammes to 500-km Sun-synchronous orbit (SSO), powered by 80-tonne and 10-tonne 'Tianque' methalox engines.

Landspace carried out a test-firing of the combustion chamber for the Tianque-12 engine in Huzhou in September.

The progress comes despite the failure of the company's first launch attempt, in October, which was due to an issue with the third stage of the Zhuque-1 solid-fuelled rocket seeing the payload failing to achieve orbit and plummeting into the Indian Ocean.

A rocket-mounted camera aboard Landspace's Zhuque-1 launch vehicle relays an image from space on October 27, 2018. Landspace