The UK will develop its own "alternative" to the EU's satellite navigation project, Prime Minister Theresa May has said. Strife over access to Galileo has caused negotiation headaches — but May's woes are far from over. 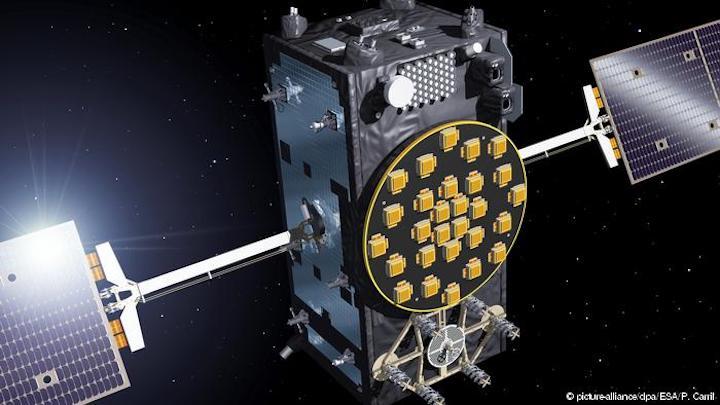 British Prime Minister Theresa May said Friday that the UK would be pulling out of the European Union's satellite navigation system Galileo following Brexit and would instead seek to develop its own national alternative.

Her announcement, made from the sidelines of the G20 summit in Argentina, was the culmination of a row between the UK and the EU over the space project, into which the UK has invested around 1 billion pounds ($1.3 billion, €1.1 billion).

Earlier this year, the UK accused the EU of shutting it out of the project before it leaves the bloc in March 2019. The EU argued that rules prevent it from sharing sensitive security information beyond its borders.

"I have been clear from the outset that the UK will remain firmly committed to Europe's collective security after Brexit," May told reporters in Buenos Aires, reiterating a theme of future cooperation that she has highlighted throughout the messy divorce negations.

"But given the Commission's decision to bar the UK from being fully involved in developing all aspects of Galileo it is only right that we find alternatives," she continued.

The EU hopes Galileo will rival the US Global Positioning System (GPS) once it fully launches in 2020.

The UK will work with the United States to be able to keep using its GPS, May's office said. Additionally, Britain will look into building its own GPS system to provide smartphone services, run energy networks and support military drones.

"I cannot let our armed services depend on a system that we cannot be sure of," May said of the Galileo system. "That would not be in our national interest.".

But what about the money?

In August, as the argument over Galileo access was in full swing, Britain announced that it had set aside 92 million pounds for creating its own satellite system.

While the country had demanded that the EU repay the 1 billion pound investment it had made into Galileo if access to the system was denied, May made no mention of recouping costs in her Friday statement.

A senior British official said the repayment question was still a "live issue" to be discussed with the EU at future Brexit negotiations, Reuters news agency reported.

May is facing a political firestorm for her plan to take the UK out of the bloc, including from within her own Tory Party.

On Friday another member of the prime minister's cabinet quit in protest against the Brexit plan — and cited the UK being shut out of the Galileo project as a taste of what's coming to post-Brexit Britain.

Sam Gyimah, Britain's universities and science minister, announced he was stepping down and that he would vote against the Brexit withdrawal agreement when it faces a parliamentary vote in December.

"The PM is right to call time on a negotiation that was stacked against us from the very beginning," Gyimah said of the Galileo strife. "But Galileo is only a foretaste of what's to come under the Government's Brexit deal …. Galileo is a clarion call that it will be ‘EU first', and to think otherwise … is at best incredibly naive."