Sparks also describes this case as a possible Radar-Visual.

The Blue Book file
The BB file contains only one single message describing the incident. It states the following sequence of events:

Ireceived an E-mail questioning my reevaluation of the Blue Book (BB) case involving the BOAC stratoliner on June 30, 1954. In my BB case review, I had rejected BB’s explanation of Mars but then decided to classify it as “possibly Venus”. At the time I reclassified it, I simply did not recognize it for the case that had been previously examined by Martin Shough and was considered a UFO classic. Because of this, I felt it might be necessary to explain why I classified it as “possibly Venus”.

First of all, one must remember I classified it as “possibly”. This is a classification that I use for a case where something was a possible source for the sighting. In this case, Venus was visible for the time given and the direction the pilot was looking. Therefore, one has to consider it “possible” that Venus might have been the source. 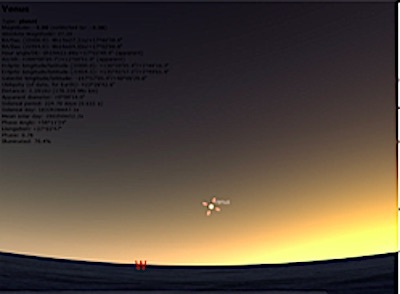 The plane was flying northeast, when the pilot noticed an object that appeared on his port side. It appeared as one large object and several smaller ones. If the plane was flying northeast, it was on a general track of 45 degrees true azimuth. If one looks directly left (270 degrees relative to the nose of the aircraft), it would be looking towards azimuth 315 degrees. However, if the pilot were looking towards the wing tip, he would be looking a further 15-30 degrees to the rear. This means the pilot was looking at 285-300 degrees azimuth. For the location given, at 0123Z Venus was at an azimuth of 287 and elevation of roughly 10 degrees. Venus was in the right location and could have been the source. The sun had already set and Venus, at magnitude -4, would have been bright enough to see. To test this, I checked to see how bright Venus was shortly after sunset in May. I was able to visually locate Venus easily without any optical aid within five min-

It is possible that the window the pilot was looking through may have distorted Venus or Venus was seen through some atmospher- ic haze/distant Cirrus clouds. There may have been ice crystals formed on the window as well (this was over Canada and at a high altitude). The end result would be that Venus could appear not as a point of light but as a large object with smaller objects attached. Considering this a possible solution, I then chose to move on to the next case in my evaluation list.

When I received the e-mail questioning the classification and pointing me towards Shough’s analysis, I decided to review his analysis again.1 I had read this some time ago and mentioned in the “Who’s blogging” section of SUNlite 2-2. In retrospect, I should have been more thorough and looked at Shough’s analysis when I examined the case and simply referenced it in the review of the June 1954 cases. I found it interesting that Shough did not mention Venus but, instead, made a case for this being a mirage. Shough also provided some additional information not found in the BB file. The sketches by the pilot were interesting and show that I was correct that he was looking towards the port wing and not directly to port. However, the sketches shows the object being dark. If it were dark, that probably would eliminate Venus as the source and put greater weight towards Shough’s mirage hypothesis. While I think the Venus explanation had some merit, these sketches make me consider that Shough’s hypothesis is more likely.