‘Dusk-like glow’ of proposed satellite could light an area with a diameter of 10-80km, People’s Daily reports 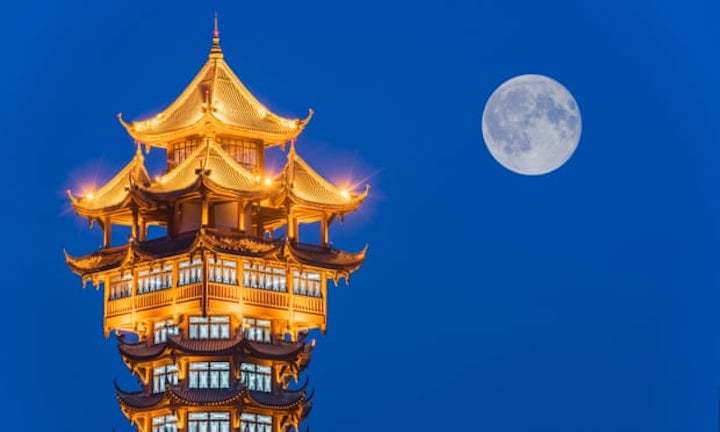 In Chengdu, there is reportedly an ambitious plan afoot for replacing the city’s streetlights: boosting the glow of the real moon with that of a more powerful fake one.

The south-western Chinese city plans to launch an illumination satellite in 2020. According to an account in the People’s Daily, the artificial moon is “designed to complement the moon at night”, though it would be eight times as bright.

The “dusk-like glow” of the satellite would be able to light an area with a diameter of 10-80km, while the precise illumination range could be controlled within tens of metres – enabling it to replace streetlights.

Wu reportedly said testing had begun on the satellite years ago and the technology had now evolved enough to allow for launch in 2020. It is not clear whether the plan has the backing of the city of Chengdu or the Chinese government, though Casc is the main contractor for the Chinese space programme.

The People’s Daily report credited the idea to “a French artist, who imagined hanging a necklace made of mirrors above the Earth which could reflect sunshine through the streets of Paris all year round”.

The likelihood of Chengdu’s fake moon rising remains to be seen. But there are precedents for this moonage daydream rooted in science, though the technology and ambitions differ.

In 2013 three large computer-controlled mirrors were installed above the Norwegian town of Rjukan to track the movement of the sun and reflect its rays down on the town square. “Rjukan – or at least, a small but vital part of Rjukan – is no longer stuck where the sun don’t shine,” reported the Guardian at the time.

Longer ago, in the 1990s, a team of Russian astronomers and engineers succeeded in launching a satellite into space to deflect sunlight back to Earth, briefly illuminating the night-time hemisphere.

The Znamya experiment was to “test the feasibility of illuminating points on Earth with light equivalent to that of several full moons”, the New York Times said. “Several” proved an overstatement, but the design was shown to be sound.

A more ambitious attempt, Znamya 2.5, was made in 1999, prompting preemptive concerns about light pollution disrupting nocturnal animals and astronomical observation. A spokesman for the technology ministry in Bonn was less concerned, telling the Guardian, “It’s a bit early for April Fool jokes but this sounds like one”.

But Znamya 2.5 misfired on launch and its creators failed to raise funding for another attempt.

The People’s Daily was quick to reassure those concerned about the fake moon’s impact on night-time wildlife.

It cited Kang Weimin, director of the Institute of Optics, School of Aerospace, Harbin Institute of Technology, who “explained that the light of the satellite is similar to a dusk-like glow, so it should not affect animals’ routines”.

Chengdu to launch "artificial moon" in 2020

Wu made the remarks at a national mass innovation and entrepreneurship activity held in Chengdu on Oct. 10.

The illumination satellite is designed to complement the moon at night. Wu introduced that the brightness of the “artificial moon” is eight times that of the real moon, and will be bright enough to replace street lights.

The satellite will be able to light an area with a diameter of 10 to 80 kilometers, while the precise illumination range can be controlled within a few dozen meters.

The idea of the "artificial moon" came from a French artist, who imagined hanging a necklace made of mirrors above the earth, which could reflect sunshine through the streets of Paris all year round.

The testing of the illumination satellite started years ago, and now the technology has finally matured, explained Wu.

Some people expressed concern that the lights reflected from space could have adverse effects on the daily routine of certain animals and astronomical observation.

Kang Weimin, director of the Institute of Optics, School of Aerospace, Harbin Institute of Technology, explained that the light of the satellite is similar to a dusk-like glow, so it should not affect animals’ routines.