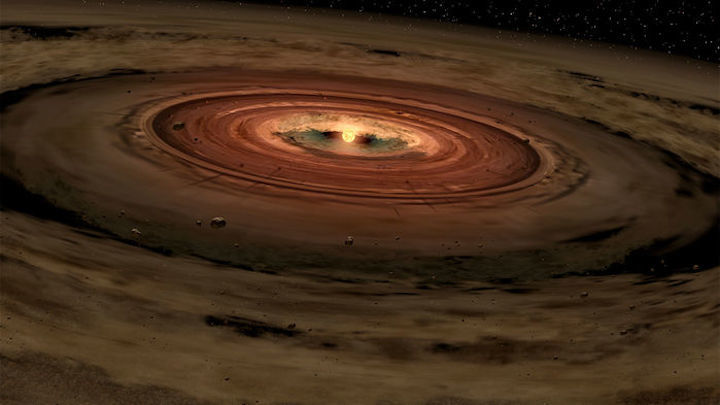 Artist’s illustration of the protoplanetary disk surrounding a young star

Astronomers have a problem on their hands: How can you make planets if you don’t have enough of the building blocks? A new study finds that protoplanetary disks—the envelopes of dust and gas around young stars that give rise to planets—seem to contain orders of magnitude too little material to produce the planets.

“This work is telling us that we really have to rethink our planetary formation theories,” says astronomer Gijs Mulders of the University of Chicago in Illinois, who was not involved in the research.

Stars are born from colossal clouds of gas and dust and, in their earliest stages, are surrounded by a thin disk of material. Dust grains within this halo collide, sometimes sticking together. The clumps build up into planetary cores, which are big enough to gravitationally attract additional dust and gas, eventually forming planets.

But many details about this process remain unknown, such as just how quickly planets arise from the disk, and how efficient they are in capturing material. The disks, surrounded by an obscuring haze of gas and dust, are difficult to observe. But radio telescopes can penetrate the haze and investigate young stars. The brightness of radio waves emitted by dust in the disk can be used to give a reasonable estimate of its overall mass.

The Atacama Large Millimeter Array (ALMA), a radio observatory in the Atacama Desert in Chile, has made it far easier to study protoplanetary disks. In the new study, astronomers led by Carlo Manara of the European Southern Observatory in Munich, Germany, used ALMA to compare the masses of protoplanetary disks around young stars between 1 million and 3 million years old to the masses of confirmed exoplanets and exoplanetary systems around older stars of equivalent size. The disk masses were often much less than the total exoplanet mass—sometimes 10 or 100 times lower, the team will report in an upcoming paper in Astronomy & Astrophysics.

Although such findings have been reported before for a few star systems, the study is the first to point out the mismatch over several hundred different systems. “I think what this work does is really set this as a fact,” Manara says.

It is possible that astronomers are simply looking at the disks too late. Perhaps some planets form in the first million years, sucking up much of the gas and dust, Manara says. ALMA has found that some extremely young stars, such as the approximately 100,000-year-old HL Tauri, already have ringlike gaps in their disks, potentially indicating that protoplanets are sweeping up material inside of them.

“But if you solve one problem, you end up with another,” says astronomer Jonathan Williams of the University of Hawaii Institute for Astronomy in Honolulu, who was also not involved in the work. If planetary cores form early, when so much material remains in the disk, nothing would stop them from ballooning into Jupiter-size behemoths. Yet the emerging census of exoplanets shows that most are Earth- or Neptune-size worlds.

Williams favors the idea that current telescopes are simply missing some of the material. ALMA’s wavelengths are tuned to best see the smallest bits of dust. But a great deal of mass, perhaps as much as 10 times what’s been observed, could be hidden in the form of pebbles, which are slightly too big to show up in such investigations. A proposed upgrade to the Very Large Array, a radio telescope in New Mexico, should be able to spot such hidden debris, perhaps accounting for some of the missing material.

One final possibility is that protoplanetary disks are somehow sucking in additional material from the surrounding interstellar medium. Manara says some recent simulations show young stars drawing in fresh material for much longer periods of time than previously believed. He hopes that observations of the earliest stages of star formation from the upcoming Square Kilometer Array or James Webb Space Telescope will help researchers decide between these different hypotheses.