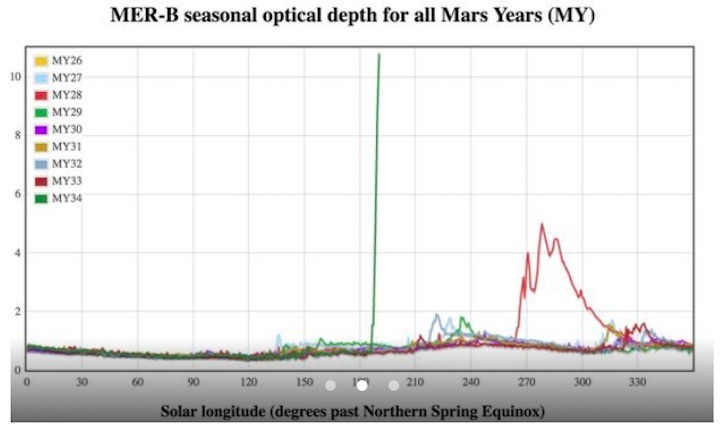 This graphic compares atmospheric opacity in different Mars years from the point of view of NASA's Opportunity rover. The green spike in 2018 (Mars Year 34) shows how quickly the global dust storm building at Mars blotted out the sky. A previous dust storm in 2007 (red, Mars Year 28) was slower to build. The vertical axis shows atmospheric opacity and the horizontal axis shows the Martian season, which is measured by where the Sun is in the Martian sky compared to its apparent position on Mars' northern spring equinox. Credit: NASA/JPL-Caltech/TAMU

It's the beginning of the end for the planet-encircling dust storm on Mars. But it could still be weeks, or even months, before skies are clear enough for NASA's Opportunity rover to recharge its batteries and phone home. The last signal received from the rover was on June 10.

Scientists observing the global event -- which is actually caused by a series of local and regional storms throwing dust into the Martian atmosphere -- say that, as of Monday, July 23, more dust is falling out than is being raised into the planet's thin air. That means the event has reached its decay phase, when dust-raising occurs in ever smaller areas, while others stop raising dust altogether.

Surface features in many areas are beginning to re-appear as seen from orbit. This should even be apparent through telescopes on the ground: Next week, Mars will make its closest approach to Earth since 2003 -- a particularly good time for observing the Red Planet.  Meanwhile, in Gale Crater, the nuclear-powered Mars Science Laboratory/Curiosity rover has noted a decline in dust overhead.

Temperatures in the middle atmosphere of Mars are no longer rising, and in some areas are starting to decrease. That indicates less solar heating by the dust.

The changes were spotted by the Mars Color Imager (MARCI), a wide-angle camera, and by the Mars Climate Sounder (MCS), a temperature profiler, on NASA's Mars Reconnaissance Orbiter (MRO). MARCI is managed by Malin Space Science Systems in San Diego. MSL, MRO and MCS are managed by NASA's Jet Propulsion Laboratory.

All of NASA's Mars spacecraft have been observing the storm, both to support the Opportunity mission and to collect unique science about this global phenomenon.