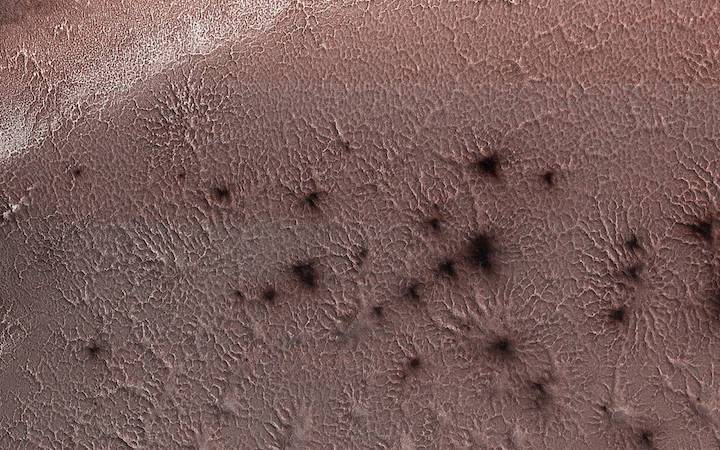 This image from NASA's Mars Reconnaissance Orbiter, acquired May 13, 2018 during winter at the South Pole of Mars, shows a carbon dioxide ice cap covering the region and as the sun returns in the spring, "spiders" begin to emerge from the landscape.

But these aren't actual spiders. Called "araneiform terrain," describes the spider-like radiating mounds that form when carbon dioxide ice below the surface heats up and releases. This is an active seasonal process not seen on Earth. Like dry ice on Earth, the carbon dioxide ice on Mars sublimates as it warms (changes from solid to gas) and the gas becomes trapped below the surface.

Over time the trapped carbon dioxide gas builds in pressure and is eventually strong enough to break through the ice as a jet that erupts dust. The gas is released into the atmosphere and darker dust may be deposited around the vent or transported by winds to produce streaks. The loss of the sublimated carbon dioxide leaves behind these spider-like features etched into the surface.