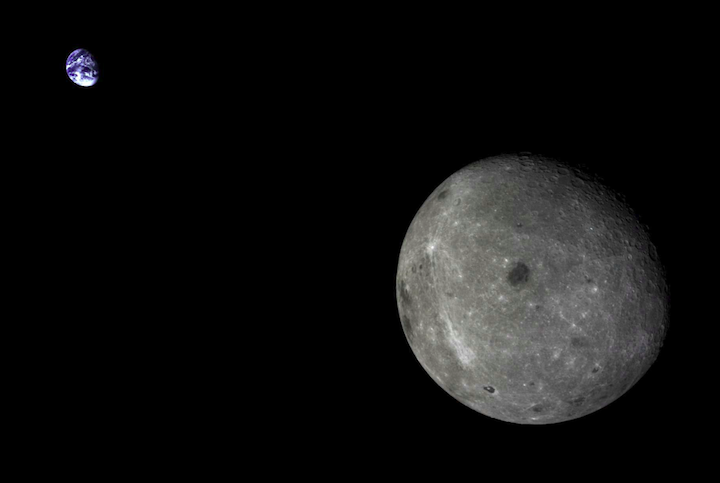 A view of the far side of the Moon and the distant Earth, captured by the service module for the 2014 Chang’e 5-T1 mission. Chinese Academy of Sciences

China's Queqiao Chang'e-4 relay satellite, launched on Sunday and currently heading to the Moon, is carrying cameras that could return more iconic images of the Earth and Moon.

The Queqiao satellite is being sent to orbit around a gravitationally stable location beyond the Moon in order to facilitate an unprecedented mission later this year to put a lander and rover on the lunar far side.

Its main communications relay role and the Netherlands-China Low-frequency Explorer (NCLE) astronomy payload have been well documented, but previously undisclosed was the fact that the 448 kg satellite is actually carrying a pair of cameras.

According to this Xinhua report (Chinese) following the launch, Queqiao, "carries two cameras, one large and one small. The small one will observe how the satellite antenna opens, and the large one can take group photos of the Moon and the Earth."

In 2014, the service module for Chang'e-5 T1, a test mission for a lunar sample return now expected in 2019, returned iconic images from the lunar far side.

This composite image shows the Moon from the far side, in different phases during its orbit around the Earth, taken by the Change 5-T1 service module. SASTIND

The service module also gave early clues that China was considering a lunar far side landing, which it will now attempt with Chang'e-4, the repurposed backup to the successful 2013 Chang'e-3 soft-landing mission on Mare Imbrium.

Chang'e-5 T1 also captured the Earth in the foreground, with the Moon, which orbits with an average distance of 384,400 km away, in the background.

A shot of the Earth and Moon taken by the service module of the Chang'e-5 T1 lunar return mission. SASTIND

Queqiao is equipped with a 4.2 metre diameter parabolic antenna to enable it to relay data between ground stations on the Earth and the lander and rover. No footage of the deployment of the antenna has been released.

No official updates on the progress of Queqiao have been released, which will perform necessary trajectory correction manoeuvres as part of its journey to the Moon and beyond.

The satellite is expected to pass the Moon at an altitude of around 110 km at UTC 13:41 on May 25, according to data computed by Bill Gray, an independent orbit analyst, before heading to its intended destination of a halo or lissajous orbit around the second Earth-Moon Lagrange point. Images will hopefully be released following its arrival.

One of the two Longjiang ('dragon river') microsatellites that launched with Queqiao but set to operate together in lunar orbit, carries an optical microcamera (Arabic) developed by the King Abdulaziz City for Science and Technology (KACST) of Saudi Arabia.

The instrument weighs around 630 g and is capable providing images of the Moon with a resolution of 38 m per pixel at a perilune of 300 km and 88 m per pixel at the expected apolune of 9, 000 km away the lunar surface.

The Longjiang-1 and -2 satellites, developed by Harbin Institute of Technology (HIT) in Northeast China, will test low-frequency astronomy and space-based interferometry in lunar orbit. However, they also carry amateur radio payloads, meaning amateurs can send commands to take and download an image of the Moon using the KACST camera. 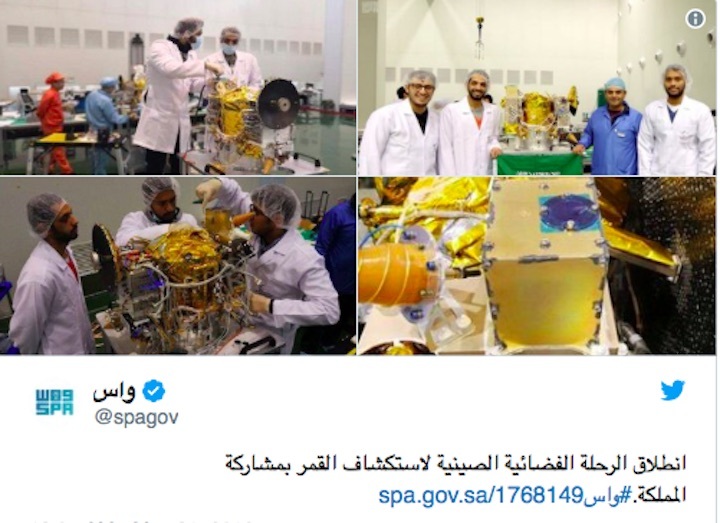