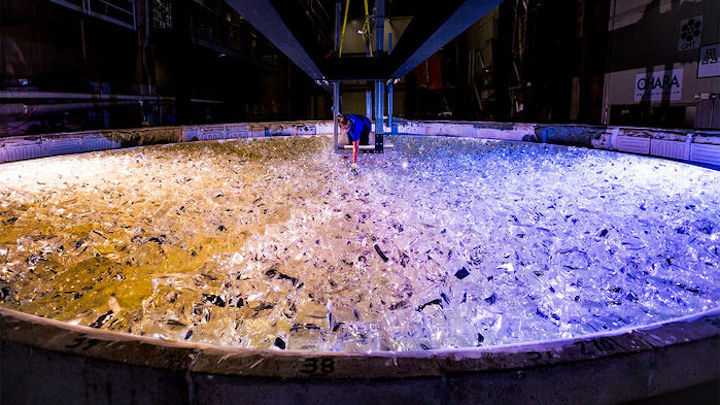 A technician prepares chunks of glass prior to spin-casting one of the seven 8-meter mirrors for the Giant Magellan Telescope.

Two U.S.-led giant telescope projects, rivals for nearly 2 decades, announced today that they have agreed to join forces. The Giant Magellan Telescope (GMT), a 25-meter telescope under construction in Chile, and the Thirty Meter Telescope (TMT), which backers hope to build atop Mauna Kea in Hawaii, have not finished acquiring the necessary partners and money. They will now work together to win funding from the National Science Foundation (NSF) in Alexandria, Virginia, which could help the projects catch up to a third giant telescope, the 39-meter European Extremely Large Telescope (ELT), due to begin operations in 2024. It is a historic peace accord to end a conflict that has divided funders and delayed both projects.

“This division has set back U.S. astronomy a decade,” says Richard Ellis, an astronomer at University College London, and a former leader of the TMT effort. “Let’s turn the corner.” Patrick McCarthy, a GMT vice president in Pasadena, California, adds, “It’s time for these two projects to come together behind a single vision.”

The partnership, approved by the GMT board this month and by the TMT board last month, commits the two projects to developing a joint plan that would allow astronomers from any institution to use the telescopes; under previous plans observing time was available only to researchers from nations or institutions that had provided funding. The projects are discussing awarding at least 25% of each telescope’s time to nonpartners through a competitive process to be administered by the National Center for Optical-Infrared Astronomy—an umbrella organization that will replace the National Optical Astronomy Observatory (NOAO), based in Tucson, Arizona, sometime in fiscal year 2019. Telescope backers hope the public access plan will help persuade the federal government to pay for at least 25% of the total cost of the two facilities, which could total $1 billion. (Cost estimates for the GMT and the TMT are $1 billion and $1.4 billion, respectively, but astronomers expect both numbers to grow.) “There are many science projects that are $1 billion class projects,” says David Silva, NOAO’s director. “The investment that we would want is of a similar size.”

Advocates for the TMT and the GMT “missed opportunities” to unite astronomers, lawmakers, and funding agencies around a single telescope in the early 2000s, Ellis says. Instead, the projects diverged. The TMT began in 2002 under the leadership of the California Institute of Technology in Pasadena and the University of California system. To make a giant mirror that wouldn’t deform under its own weight, the TMT’s partners looked for inspiration in a fly’s eye, fragmenting the main 30-meter mirror into nearly 500 small, 1.4-meter hexagonal pieces, each individually adjustable. The GMT, initially led by the Carnegie Observatories in Pasadena, has seven larger segments, each 8 meters across. They are made of stiff, lightweight glass, cast in molds that spin as the glass cools to bring it into a parabolic shape. In 2005, the GMT cast the first of its mirrors, and the divergent technological paths were set.

More than a decade later, the timing is right for rapprochement. First, the U.S. decadal survey, a once-a-decade priority-setting exercise for astronomy projects run by the National Academies of Sciences, Engineering, and Medicine, is set to begin next year, and the public access plan could solidify astronomers’ support for putting the giant telescopes high on the list. In making their case, the teams will argue the benefits of having telescopes in both the northern and southern hemispheres. “When you are covering the whole sky, you have greater scientific reach,” says Wendy Freedman, an astronomer at The University of Chicago in Illinois who was the founding leader of the GMT. The teams will also argue that the telescopes have complementary strengths. The design of the GMT, for instance, makes it ideal for a high-resolution spectrograph designed to probe the atmospheres of exoplanets. The TMT, which has more light-gathering power, could host a multiobject spectrograph to quickly gather demographic statistics on the universe’s first galaxies.

Uniting the projects could also help overcome funding challenges. Most nations and deep-pocketed institutions had already aligned themselves behind one telescope or the other, but neither project has enough money to cross the finish line. TMT construction has faced costly delays because of legal challenges and protests by Native Hawaiian groups that object to building atop Mauna Kea, which they consider sacred; planners are considering relocating the TMT to Spain’s Canary Islands. And although the GMT hopes to start observing in 2024 with four of its seven mirrors, it, too, needs new partners to see it through. The European Southern Observatory, meanwhile, has made steady progress on the ELT, aided by its regular member state contributions. “The ELT is real,” Silva says. “That focused minds.”

In the end, success will hinge on NSF and Congress. Silva says NSF Astronomical Sciences Division Director Richard Green, as well as Anne Kinney, an astronomer recently chosen to head the agency’s mathematical and physical sciences directorate, “were willing to open the door to exploring this possibility.” But Kinney says she and Green first want to see the results of the decadal survey. “Depending on how the GMT and TMT come out, we are very interested in the large telescopes,” she says.

A key lawmaker appears to hold similar views. Representative John Culberson (R–TX), who chairs the House of Representatives spending panel that sets funding levels for NSF, told Science he could envision NSF helping to pay for the telescopes. “But I’m waiting to hear from the next decadal survey” before taking a definitive position, he says. Still, Culberson’s panel last week approved a 2019 spending bill that directs NSF to “articulate a plan to ensure public access in future large optical observatories.”

Even if NSF ultimately gets money to help build the two telescopes, funding for long-term operating expenses may be harder to find. The agency is already expecting to strain to pay for operating new telescopes—such as the Large Synoptic Survey Telescope, an 8.4-meter survey telescope in Chile—let alone two much bigger ones. Silva says the agency is “really struggling to enable leading-edge facilities while maintaining healthy grants programs.”