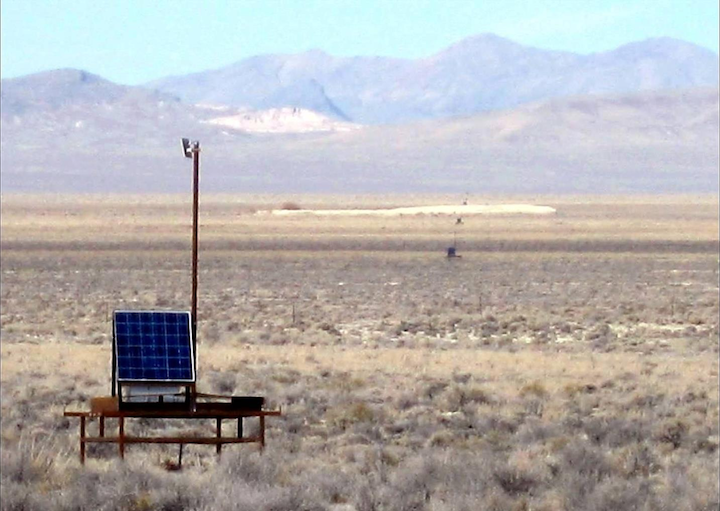 In the western Utah desert, the Telescope Array sprawls across an area the size of New York City, waiting for cosmic rays. The facility detects the high-energy particles that collide with Earth’s atmosphere constantly; the cosmic rays trigger the 500-plus sensors once every few minutes.

While pouring over data in 2013, Telescope Array physicists discovered a strange particle signature; the photon equivalent of a light drizzle punctuated by a fire hose. The array had unexpectedly recorded an extremely rare phenomenon — gamma rays, the highest-energy light waves on the electromagnetic spectrum, produced by lightning strikes that beam the radiation downward toward the Earth’s surface. Five years later, an international team led by the Cosmic Ray Group at the University of Utah has observed the so-called downward terrestrial gamma ray flashes (TGFs) in more detail than ever before.

The Telescope Array detected 10 bursts of downward TGFs between 2014 and 2016, more events than have been observed in rest of the world combined. The Telescope Array Lightning Project is the first to detect downward TGFs at the beginning of cloud-to-ground lightning, and to show where they originated inside thunderstorms. The Telescope Array is by far the only facility capable of documenting the full TGF “footprint” on the ground, and show that the gamma rays cover an area 3 to 5 km in diameter.

“What’s really cool is that the Telescope Array was not designed to detect these,” said lead author Rasha Abbasi, researcher at the High-Energy Astrophysics Institute and the Department of Physics & Astronomy at the U. “We are 100 times bigger than other experiments, and our detector response time is much faster. All of these factors give us the ability that we weren’t aware of — we can look at lightning in a way that nobody else can.”

The study published online on May 17 in The Journal of Geophysical Research: Atmospheres. 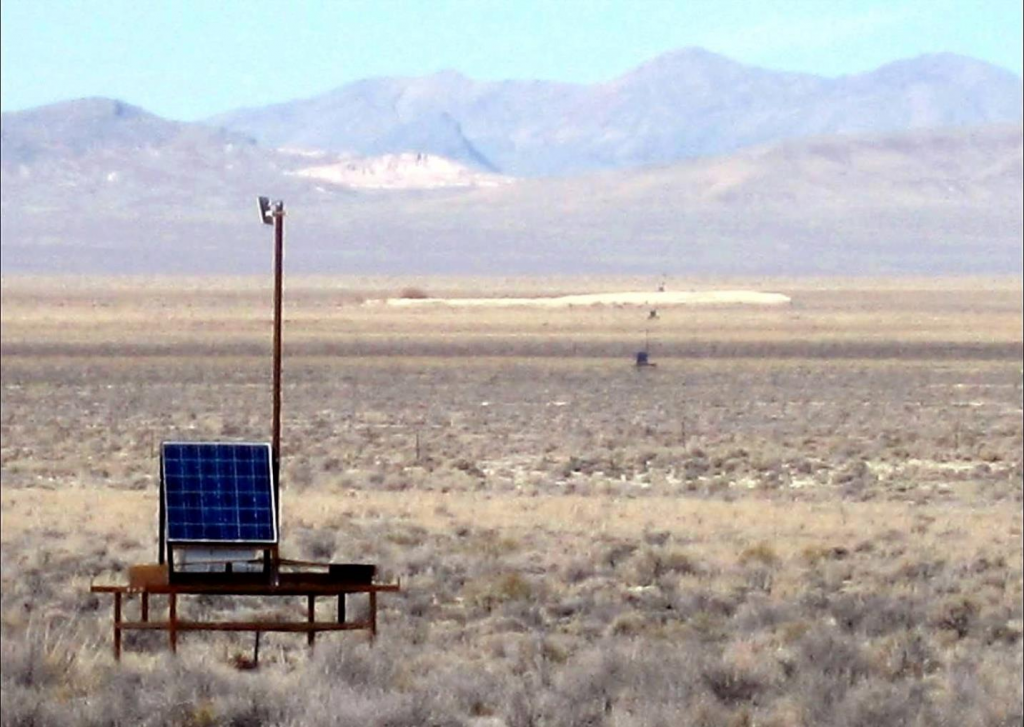 A Telescope Array Surface Detector and its neighbors, deployed in Utah’s west desert. The 507 detectors are arranged on a grid covering 700 square kilometers, about the same as the land area of New York City.

The work builds on a study published by the group last year that established a strong correlation between similar bursts of energetic particle showers detected between 2008 and 2013, and lightning activity recorded by the National Lightning Detection Network. The physicists were stunned.

“It was BOOM BOOM BOOM BOOM. Like, four or five triggers of the detectors occurring within amillisecond. Much faster than could be expected by cosmic rays,” said John Belz, professor of physics at the U and principal investigator of the National Science Foundation-funded Telescope Array Lightning Project. “We realized eventually that all of these strange events occurred when the weather was bad. So, we looked at the National Lightning Detection Network and, low and behold, there would be a lightning strike, and within a millisecond we would get a burst of triggers.”

The researchers brought in lightning experts from the Langmuir Laboratory for Atmospheric Research at New Mexico Techto help study the lightning in more detail. They installed a nine-station Lightning Mapping Array developed by the group, which produces 3-D images of radio-frequency radiation that lightning emits inside a storm. In 2014, they installed an additional instrument in the center of the array, called a “slow antenna,” that records changes in the storm’s electric charge caused by the lightning discharge.

The bright flash of light is only one stage of lightning; there’s a substructure that happens too fast for the eye to see. “Step leaders” proceed toward the ground in stages. Negative electric charge builds at the leader tip until it is sufficient to cause the air to break down and form a new conducting path. The study found that terrestrial gamma rays are produced within the first 1-2 milliseconds of the initial breakdown stage, which is the least understood part of lightning.

“Taken together, the Telescope Array detections and the lightning observations constitute a major advance in our understanding of TGFs.  Prior to this, TGFs were primarily detected by satellites, with little or no ground based data to indicate how they are produced”, said Paul Krehbiel, long-time lightning researcher at New Mexico Institute of Mining and Technology and co-author of the study. “In addition to providing much better areal coverage for detecting the gamma rays, the array measurements are much closer to the TGF source and show that the gamma rays are produced in short duration bursts, each lasting only ten to a few tens of microseconds.”

Until a FERMI satellite recorded the first TGF in 1994, physicists thought only violent celestial events, such as exploding stars, could produce gamma rays. Gradually, scientists determined that the rays were produced in the initial milliseconds of upward intracloud lightning, which beamed the rays into space. Since discovering these upward TGFs, physicists have wondered whether cloud-to-ground lightning could produce similar TGFs that beam downward to the Earth’s surface.

Previously, only six downward TGFs have ever been recorded, two of which came from artificially-induced lightning experiments. The remaining four studies with natural lightning report TGFs originating much later, after the lightning had already struck the ground. The array’s observations are the first to show that downward TGFs occur in the initial breakdown stage of lightning, similar to the satellite observations.

An animation of cloud-to-cloud lightning (the circles) as detected by the Lightning Mapping Array (LMA) over the Telescope Array Surface Detectors (red squares). The color represents time – earliest LMA sources are in blue, and the latest in red. The entire event takes about one tenth of a second. The LMA is sensitive to what is happening thousands of meters above the ground.

“The downward-going TGFs are coming from a similar source as the upward ones. We safely assume that we have similar physics going on. What we see on the ground can help explain what they see in the satellites, and we can combine those pictures in order to understand the mechanism of how it happens,” said Abbasi.

“The mechanism that produces the gamma rays has yet to be figured out,” added Krehbiel.

The researchers have many questions left unanswered. For example, not all lightning strikes create the flashes. Is that because only one particular type of lightning initiation produces them? Are the scientists only seeing a subset of TGFs that happen to be large enough, or point in the right direction, to be detected?

The team hopes to bring additional sensors to the Telescope Array to enhance the lightning measurements. In particular, installing a radio-static detecting “fast antenna” would enable the physicists to see the substructure in the electric field changes at the beginning of the flash.

“By bringing other types of lightning detectors and expanding the effort, I think we can become a significant player in this area of research,” said Belz.

This study resulted from a collaboration between 126 co-authors from 33 universities and research institutions from the United States, Japan, Korea, Russia and Belgium.. For a full list of co-authors, please refer to the study abstract.