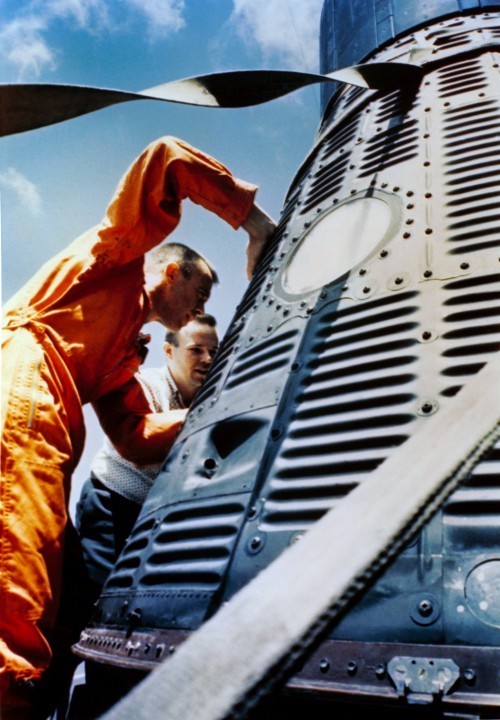 On the deck of the U.S.S. Lake Champlain, Alan Shepard checks out the interior of Freedom 7 – the vehicle which had protected him from the rigours of a launch and high-G acceleration, had kept him alive and well in the most hostile environment ever encountered by humanity and sustained him throughout a perilous descent from orbit. Photo Credit: NASA

In the half-hour between 9:30 and 10 a.m. Eastern Time on 5 May 1961, the United States came, quite literally, to a standstill. A Philadelphia appeals court judge interrupted all proceedings to make an announcement, whilst free champagne—even at this hour—flowing freely in taverns, and traffic slowed in California freeways and people danced and sang in Times Square. Even the new president, John F. Kennedy, barely four months into his new job as one of the most powerful men in the world, could only watch, dumbstruck, as he beheld the view on a TV screen.

Fifty-seven years ago, America launched its first astronaut and set the nation’s feet on a new road, a new adventure, to discover a frontier far more ambitious than any previously contemplated: the conquest of space. Standing in his secretary’s office, after having just broken up a meeting of the National Security Council, Kennedy’s hands were shoved deep into his pockets as he witnessed real history in the making. On the screen, the camera panned upward to trace the trajectory of a rocket, heading into space, bearing the first American ever to break the bonds of Earth and venture into the ethereal blackness of space beyond.

More than five decades later, it is easy to consider John Glenn’s orbital mission in February 1962 as having overshadowed the 15-minute “suborbital” flight of Alan Shepard aboard Freedom 7. After all, Shepard’s Redstone booster lacked the impulse to accomplish a full orbit, and he essentially rose from Florida and splashed down in the Atlantic Ocean, 99 miles (160 km) north of the Bahamas. Yet for a relieved America—still smarting from an embarrassing failure to topple Fidel Castro’s regime in Cuba and an equally humiliating loss in the space race to the Soviet Union—it was a timely and spectacular triumph. For the man inside the cramped Freedom 7 capsule, his world was the spacecraft. At 9:34 a.m., he heard the firing command, but he would subsequently admit that excitement quickly took over. When the countdown clock touched zero, Shepard’s gloved hand instinctively moved to start the mission timer. “The liftoff was a whole lot smoother than I expected,” he later recalled. “I really expected to have to use full volume control to be able to receive, but all my transmissions over UHF were immediately acknowledged, without any repeats being requested.” Al Shepard undergoes training aboard the Freedom 7 capsule on 29 April 1961. By this stage, the United States had already lost the race to put a man into space to the Soviet Union. Photo Credit: NASA

Fifteen minutes seems too short a time for much of meaningful substance to be achieved. It was quite the reverse. Before launch, Shepard agreed with Walt Williams, the operations director for Project Mercury, that he would talk as much as possible, to keep everyone updated on the most arcane details. As the Redstone rose higher, his calls crackled over the radio, giving fuel readings, oxygen readings, G-meter readings, and systems readings. The stresses of launch were surprisingly low—much lower than his training had prepared him for in the simulators and centrifuges—although it took a bumpier turn when the Redstone reached the transitional zone between the edge of the “sensible” atmosphere and space. Eighty-eight seconds into the flight, Freedom 7 shuddered violently and, according to Shepard’s biographer, Neal Thompson, the astronaut’s head began “jackhammering so hard against the headrest that he could no longer see the dials and gauges clearly enough to read the data”. A few moments later, the vibrations calmed.

A minute later, at 141.8 seconds after launch, the rocket’s engine finally fell silent and the escape tower was jettisoned. (The latter should have been automatic, but it would appear that Shepard pulled the manual “JETT TOWER” override.) Small explosive charges separated Freedom 7 from the rocket, and thrusters pushed the pair gently apart. Now flying freely, Shepard’s mission was to prove that, unlike Yuri Gagarin, he could actively control his spacecraft. He switched from automatic to manual control about three minutes after launch and, using his control stick, tilted the capsule through pitch, yaw, and roll manoeuvres, all whilst travelling at a suborbital velocity of more than 5,000 mph (8,000 km/h), three times faster than any American in history. The craft responded crisply, although the spurt of its hydrogen peroxide thrusters was often drowned out by the crackle of the radio. “Weightlessness” came as a peculiar surprise, as Shepard’s body gently floated from his couch and against his shoulder harnesses. Flecks of dust drifted past his face, together with a steel washer, which quickly vanished from view. Nearing the apex of his upward arc from Earth, he glanced through Freedom 7’s periscope to behold the splendor of Earth, spread out, map-like, “beneath” him. Unfortunately, during the morning’s lengthy delays, to prevent sunlight from blinding him he had flipped a switch to cover the lens with a grey filter and had forgotten to remove it. Now he could only see a grey-colored blob on the screen. He tried to reach across the cabin to flick off the filter, but his wrist inadvertently touched the abort handle, and he thought it best to leave it well alone.

His words—“What a beautiful view!”—were doubtless sincere, but certainly were not accompanied by full color. Still, he was able to see quite “remarkable” things, including Lake Okeechobee, on the northern edge of the Everglades, as well as Andros Island, shoals off Bimini, and cloud cover over the Bahamas. Later, he would tell a journalist for Life magazine that he saw “brilliantly clear” colors, but admitted privately that the gray filter obliterated most of the color. “I had to say something for the people,” he later remarked to fellow astronaut Wally Schirra.

Back on Earth, those “people” were watching and listening intently. At the top of his long arc over the Atlantic Ocean—reaching 116 miles (186 km) at his highest point—the periscope automatically retracted and Shepard strained to search for stars through Freedom 7’s awkwardly placed port holes. Disappointingly, he saw nothing. There was little time to ponder about it. Only a third of his 15-minute space voyage would be spent “in space”, and of those precious minutes virtually all were devoted to scientific and technical tasks, lasting a minute here and two minutes there. At length, the capsule’s retrorockets fired and at 9:40 a.m., a little over six minutes since launch, Shepard began his descent to the ocean. Carrying the hopes and dreams of a nation, Freedom 7 thunders into space on the morning of 5 May 1961. Photo Credit: NASA

The return to Earth, whose gravitational stresses peaked at 11 G, was physically demanding and “not one most people would want to try at an amusement park”. Within 30 seconds, Freedom 7 slowed from 5,000 mph (8,000 km/h) to less than 500 mph (800 km/h). So high were the G forces that Shepard could barely manage more than a few guttural grunts to Deke Slayton in the control centre. Inside the capsule, temperatures remained stable at 28 degrees Celsius—“like being in a closed van on a warm summer day,” he later noted—as the blistering extremes of re-entry, outside, reached 1,200 degrees Celsius.

Four miles (6.4 km) above the Atlantic, the drogue parachute popped out of Freedom 7’s nose, followed by the jettisoning of the antenna capsule and deployment of the 63-foot (19-meter) orange and white main canopy. With “a reassuring kick in the butt”, the latter served to arrest the capsule’s descent and a snorkel valve equalised pressure with the outside air. Moving more slowly now through the clouds, the capsule descended in a stately manner, at no more than 19 mph (30 km/h), and splashed down beautifully. Shepard had landed 300 miles east of Cape Canaveral and within sight of the recovery vessel, U.S.S. Lake Champlain.

It was 9:49 a.m. Fifteen minutes and 28 seconds had elapsed since launch and America’s first manned mission into space was complete. Al Shepard is hoisted aboard the helicopter, deftly piloted by Wayne Koons, after completing his 15-minute suborbital flight. The patch of fluorescent green marker dye in the water around Freedom 7 is particularly obvious. Photo Credit: NASA

After splashdown, Freedom 7 listed over to its right side, but quickly returned to a normal, heatshield-down orientation. The parachutes cast loose to prevent dragging the capsule and a large patch of green fluorescent marker dye quickly spread across the water. Within minutes, Wayne Koons, pilot of one of the five Marine Air Group 26 rescue helicopters from the Lake Champlain, was hovering overhead, and his co-pilot, George Cox, had snagged the capsule with a hook and line.

At length, Shepard popped open the hatch and grabbed the padded harness (nicknamed “the horse’s collar”) that Cox had lowered, looping it over his head and under his arm. As he did so, he could not help but recall that Death’s foul breath was still on his face. Only hours earlier, he had read a worrying report about fellow aviators Malcolm Ross and Victor Prather. On 4 May, the pair had ascended 21 miles (34 km) above the Gulf of Mexico in a balloon gondola. It was part of the Navy’s Stratolab high-altitude research project. During their nine-hour ascent, the two pressure-suited men endured temperatures as low as minus 70 degrees Celsius and descended perfectly to the waters of the Gulf, whereupon tragedy struck in the most abrupt and shocking fashion. Mistakenly believing himself to be out of danger, Prather opened his helmet visor, but as he climbed a ladder to the rescue helicopter, he slipped, fell, and drowned as his suit rapidly filled with water. Alan Shepard needed no reminder of the risks involved with what he was doing, but Prather’s death provided another sobering warning. Shepard is winched to safety in the minutes after Freedom 7 splashed into the Atlantic Ocean. Photo Credit: NASA

Less than 24 hours after Prather’s demise, it was, for Shepard and for America, “a beautiful day”. Twelve hundred sailors crowded the deck of the Lake Champlain, cheering the nation’s newest hero. Freedom 7 would be exhibited at 1961’s Paris Air Show, and the astronaut himself set foot on the deck of the recovery ship as the clock struck 10 a.m. Across the nation, the euphoria was electrifying. Floridians cheered, John Glenn jokingly asked for another Redstone to be set up for him, New Hampshire’s governor visited Shepard’s hometown, schools were closed and military aircraft dropped confetti. The astronaut’s proud parents and sister rode in an open-topped convertible, his wife, Louise, chatted to journalists outside her Virginia Beach home, and Navy jets spelled the letter “S” in the sky.

For the hero, the first hour back on Earth was spent reliving the 15 minutes in mind-numbing detail for the physicians, the psychologists, the engineers and the scientists. The flight of Freedom 7 was an enormous shot in the arm for the United States, at a time when the nation’s scientific and technological might was being held in check by the Soviet Union. Although Shepard had not surpassed Yuri Gagarin’s achievement, the fact that his mission was played out in the full glare of world publicity underscored the reality that America desired to adopt a stance of openness and transparency in its human space endeavors. Three weeks later, on 25 May 1961, the ultimate consequence of Shepard’s flight was enshrined in government policy by President Kennedy himself: by committing the nation to landing a man on the Moon, and granting barely eight years in which to do it.