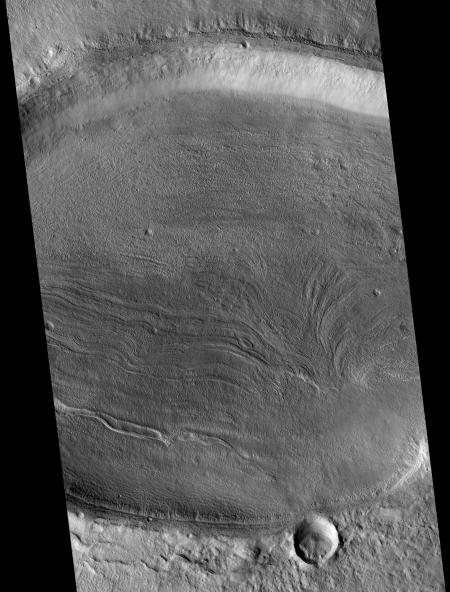 Cool image time! Yesterday the Mars Reconnaissance Orbiter (MRO) team released its monthly image dump of more than 500 new photographs, taken by the spacecraft’s high resolution camera. As I have started to do in the past few months, I am reviewing this collection and plan to post a few of the more interesting images over the next month. On the right is the first of this series. I have cropped and reduced the resolution to show here, but you can see the full resolution version if you click on the image.

The MRO team labels this image an “elliptical crater with flow features.” The first impression one gets from the image is that the impact that caused the crater came from the side and hit the ground obliquely, creating the crater’s oval shape and the lava-type flow features in the crater’s floor.

As is almost always the case with Martian geology, beware of first impressions. You need to give any feature both a more detailed look as well as a broader view to have any chance at understanding its context and geology. 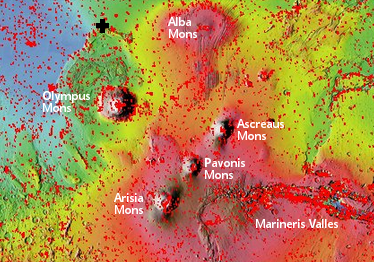 First we have to check the crater’s location on Mars. The image on the right, taken from the MRO high resolution camera’s archive webpage, shows that this crater, indicated by the black cross, is located north of Olympus Mons, and is on the northern perimeter of the giant Tharsis Bulge where all of Mars’ biggest volcanoes are located.

That the flows on the crater’s floor all trend to the north, away from Tharsis, suggests that this crater is actually on a slope, formed as part of the many volcanic events that laid numerous layers of lava down on this part of Mars’ surface. Looking at the full resolution and uncropped image, to my eye the differences between the ejecta features on the north and south sides of the crater also suggest this. On the south the ejecta flows outside the rim seem bunched up, shorter, and steeper, as if they had to flow uphill. On the north the flows are more gentle and extended, as if they were flowing downhill and were not impeded by gravity. 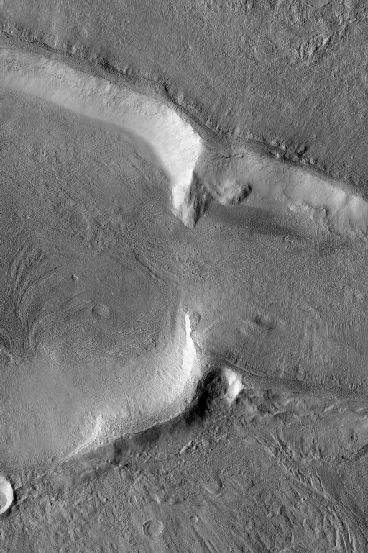 Next it is necessary to see if MRO took any other images of this crater and its surrounding area. The red rectangles in the overview image show that there are some other images taken in this area. By zooming in at the archive webpage at the image’s latitude and longitude (40.514° N and 222.497° E) one can see that MRO took three other images of this crater. The image to the right, cropped to post here, is the most interesting, as it shows the eastern rim of this crater, and reveals that the crater rim is broken, with the material on the crater floor appearing to have flowed outward through this gap.

At this point, second impressions suggest that instead of being an impact crater, this crater is actually a volcanic caldera, similar in nature to the giant calderas at the tops of Olympus Mons and the other giant volcanoes on the Tharsis Bulge.

Not so fast. Martian geology is not so easy. If you click on the cropped image of the crater’s eastern rim, you can see the full photograph, showing features to the north and south of this crater. To the north are more crater-type features, all of which look like older impact craters, not volcanic calderas, that have been distorted and mostly filled by later volcanic flows. 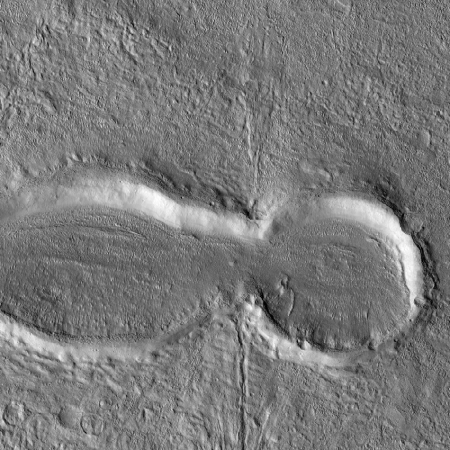 Moreover, the MRO image taken of the next crater feature to the west, cropped and reduced in resolution to post on the left, shows that it is comprised of two craters, one also elongated in an east-west direction, and the other round like an ordinary impact crater.

That these craters all run along an east-west line, however, adds weight to a volcanic origin, not impact. At the same time, there is nothing to say that while most of these crater features are volcanic, a few were impacts as well.

As always, I admit that I am no geologist, and my guesses here are based on a little knowledge, which is a dangerous thing. I would be very interested in hearing what others think. Any geologists out there willing to chime in? Any planetary geologists?

Quelle: BEHIND THE BLACK