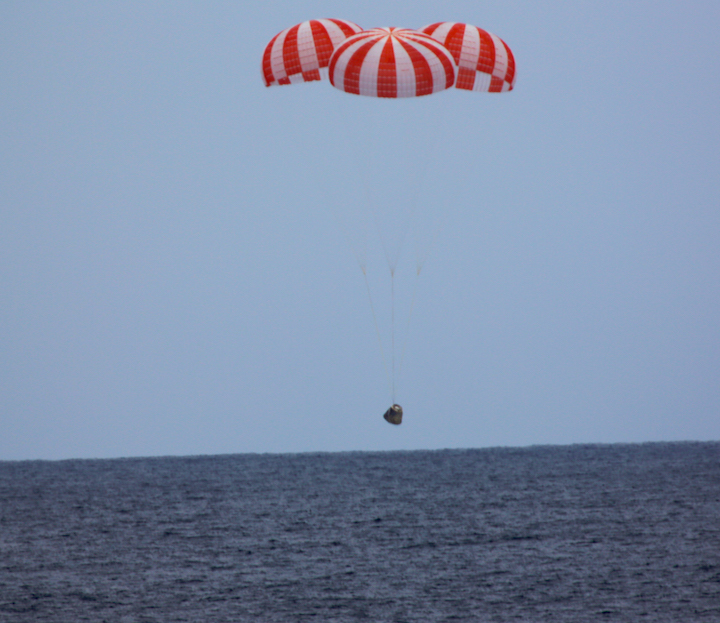 SpaceX's Dragon cargo spacecraft is scheduled to splash down in the Pacific Ocean on Saturday, May 5, west of Baja California, with more than 4,000 pounds of NASA cargo, science and technology demonstration samples from the International Space Station.

The Dragon spacecraft will be taken by ship to Long Beach, where some cargo will be removed immediately for return to NASA. Dragon then will be prepared for a return trip to SpaceX's test facility in McGregor, Texas, for final processing.

A variety of technological and biological studies are returning in Dragon.

Samples from the Metabolic Tracking study will help researchers understand the effects of microgravity on the metabolic impact of five different therapeutic compounds. This investigation determines the feasibility of developing improved pharmaceuticals in microgravity using a new method to test the metabolic impacts of drug compounds. This could lead to more effective, less expensive drugs.

The APEX-06 investigation studied the growth, development, and gene expression profiles of seedlings from the monocot Brachypodium distachyon. Most major cereal grain crops used to produce food belong to a class of plants called monocotyledons or monocots, flowering plants whose seeds typically contain only one embryonic leaf. This investigation will lead to a better understanding of the molecular and developmental mechanisms that contribute to adaptation to spaceflight conditions. In the long term, results may also lead to the development of strategies aimed at improving monocot adaptability to spaceflight parameters, which would be beneficial for future human space exploration as monocots provide many food staples.

Fruit Fly Lab–03 is the third mission of the Fruit Fly Lab aboard the station using the model organism Drosophila melanogaster. Drosophila are used for research because approximately 75 percent of human disease genes have analogs in the fruit fly genome. This mission studied the effects of the space environment on innate immunity, which is the branch of the immune system responsible for quick, non-specific responses to infection. This subject is important for preparing for future exploration as immune system dysfunction and infections are potential risks for astronauts on long-duration space exploration missions.

For more than 17 years, humans have lived and worked continuously aboard the International Space Station, advancing scientific knowledge and demonstrating new technologies, making research breakthroughs not possible on Earth that will enable long-duration human and robotic exploration into deep space. A global endeavor, more than 200 people from 18 countries have visited the unique microgravity laboratory that has hosted more than 2,300 research investigations from researchers in more than 100 countries.

An experimental humanoid known as Robonaut is back on Earth.

SpaceX tweeted that its Dragon capsule carrying Robonaut and other items from the International Space Station made a good splashdown in the Pacific on Saturday afternoon.

The capsule splashed down off the California coast.

It was the second of two space-related events Californians were treated to Saturday. In the early morning, NASA launched a Mars lander from Vandenberg Air Force Base.

In orbit for seven years, Robonaut needs a tuneup because of circuitry problems. NASA officials say Robonaut may launch again, once fixed.

In all, the Dragon returned nearly 4,000 pounds (1,800 kilograms) of space station experiments and equipment. The capsule had arrived at the space station with a fresh load of supplies a month ago.