For 28 years, NASA’s Hubble Space Telescope has been delivering breathtaking views of the universe. Although the telescope has made more than 1.5 million observations of over 40,000 space objects, it is still uncovering stunning celestial gems.

The latest offering is this image of the Lagoon Nebula to celebrate the telescope’s anniversary. Hubble shows this vast stellar nursery in stunning unprecedented detail.

At the center of the photo, a monster young star 200,000 times brighter than our Sun is blasting powerful ultraviolet radiation and hurricane-like stellar winds, carving out a fantasy landscape of ridges, cavities, and mountains of gas and dust. This region epitomizes a typical, raucous stellar nursery full of birth and destruction. 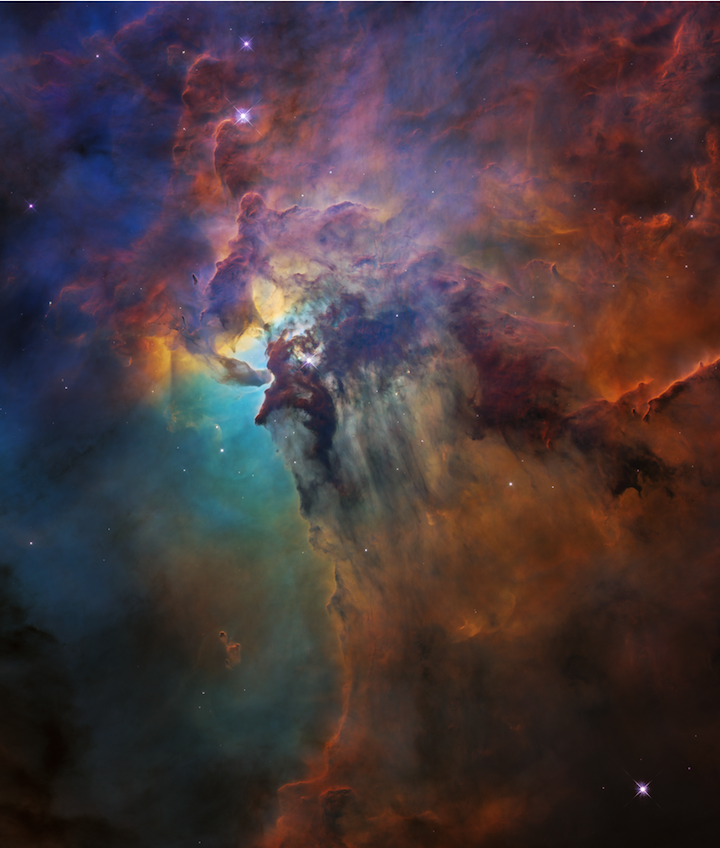 This colorful image, taken by NASA’s Hubble Space Telescope, celebrates the Earth-orbiting observatory’s 28th anniversary of viewing the heavens, giving us a window seat to the universe’s extraordinary tapestry of stellar birth and destruction.

At the center of the photo, a monster young star 200,000 times brighter than our Sun is blasting powerful ultraviolet radiation and hurricane-like stellar winds, carving out a fantasy landscape of ridges, cavities, and mountains of gas and dust.

This mayhem is all happening at the heart of the Lagoon Nebula, a vast stellar nursery located 4,000 light-years away and visible in binoculars simply as a smudge of light with a bright core.

The giant star, called Herschel 36, is bursting out of its natal cocoon of material, unleashing blistering radiation and torrential stellar winds (streams of subatomic particles) that push dust away in curtain-like sheets. This action resembles the Sun bursting through the clouds at the end of an afternoon thunderstorm that showers sheets of rainfall.

This region epitomizes a typical, raucous stellar nursery full of birth and destruction. The clouds may look majestic and peaceful, but they are in a constant state of flux from the star’s torrent of searing radiation and high-speed particles from stellar winds. As the monster star throws off its natal cocoon of material with its powerful energy, it is suppressing star formation around it.

However, at the dark edges of this dynamic bubble-shaped ecosystem, stars are forming within dense clouds of gas and dust. Dark, elephant-like “trunks” of material represent dense pieces of the cocoon that are resistant to erosion by the searing ultraviolet light and serve as incubators for fledgling stars. They are analogous to desert buttes that resist weather erosion.

The Hubble view shows off the bubble’s 3D structure. Dust pushed away from the star reveals the glowing oxygen gas (in blue) behind the blown-out cavity. Herschel 36’s brilliant light is illuminating the top of the cavity (in yellow). The reddish hue that dominates part of the region is glowing nitrogen. The dark purple areas represent a mixture of hydrogen, oxygen, and nitrogen.

The image shows a region of the nebula measuring about 4 light-years across.

Launched on April 24, 1990, NASA’s Hubble Space Telescope has made more than 1.5 million observations of more than 43,500 celestial objects.

In its 28-year lifetime the telescope has made more than 163,500 trips around our planet. Hubble has racked up plenty of frequent-flier miles, about 4 billion miles.

Hubble observations have produced more than 153 terabytes of data, which are available for present and future generations of researchers.