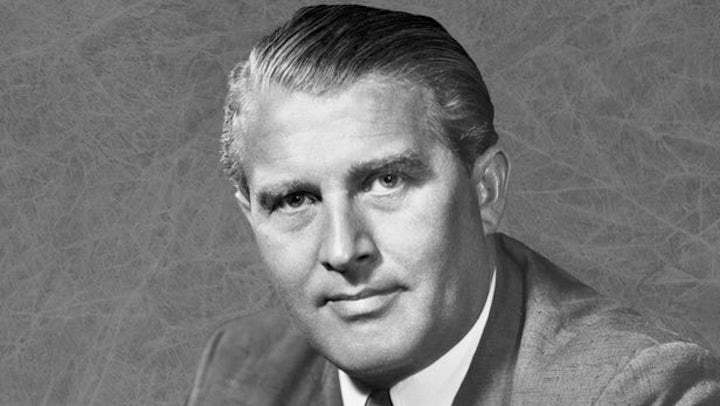 A collection of some of the most important seminal documents of the Space Age are open for bids as rocket pioneer Wernher von Braun's "Man Will Conquer Space Soon" archive goes on the block. A collection of signed technical drawings, schematics, memos, orbital diagrams, and mathematical calculations related to von Braun's efforts to sell an ambitious space program to both the American public and the US government, it's the centerpiece of the Space and Aviation Auction at Boston-based RR Auction through April 19.

On March 22, 1952, the American weekly feature magazine Collier's hit the newsstands. Among its usual mixture of advertisements and articles was the first of a series of features that would run for the next two years. These seemed like the wildest science fiction at the time, but would become established fact within a surprisingly few years.

The series was called "Man Will Conquer Space Soon" and included painstakingly detailed color illustrations by magazine artists Chesley Bonestell, Fred Freeman, and Rolf Klep. It outlined a complete program for building an unmanned satellite, a manned space shuttle, a space station, an expedition to set up an outpost on the Moon, and topped it off with the conquest of Mars.

Later compiled into and expanded by three coffee table books – Across the Space Frontier (1952), Conquest of the Moon (1953), and The Exploration of Mars (1956) – the series was the brainchild of Wernher von Braun, one of the great rocket pioneers of the 20th century. He was the man behind Germany's V2 rocket, and architect of the Saturn V booster that would send the first men to the Moon on the Apollo missions.

In the early 1950s, von Braun was working on ballistic missiles for the US Army, but his real goal was to get the US government to back a full-scale space program aimed at manned landings on the Moon and Mars within the next generation. To this end, he set out on a deliberate campaign to persuade the American public that such a program was not only feasible, but practical, and to put pressure on the federal government to invest in it.

With the help of his friend, popular science author and fellow Germany expatriate Willy Ley, von Braun arranged an introduction to Cornelius Ryan, the editor of Collier's. He sold him on the idea of a major feature series and they then recruited Ley, the astronomer Fred L. Whipple, space medicine expert Hans Haber, and American law and international diplomacy professor Oscar Schachter to write articles with von Braun that brought his vision of the conquest of space to life.

To anyone who has studied the story of Apollo, the Space Shuttle, and the International Space Station, many of the details are familiar. This is no surprise, since all of these projects relied heavily on von Braun's expertise, but the Collier's space program made the real life Space Race seem anemic by comparison.

Where Apollo put two astronauts on the Moon in a single lander, von Braun envisioned an armada of three giant moonships, each taller than the Statue of Liberty and containing a total crew of 50. Two of the ships would have been reusable, while the third would be dismantled to provide the raw material for the first moonbase complete with laboratories and electric tractors for long-distance recon missions.

These monster ships would have been built at an equally gigantic space station orbiting 1,075 mi (1,730 km) above the Earth. It would have a diameter of 250 ft (76 m), be powered by solar panels that boiled mercury for turbines, and hold a crew of 80 in comfort as the giant wheel rotated to provide one-third Earth gravity. This US$4-billion station, to be completed by 1967, would be built and serviced by a fleet of ferry rockets with reusable shuttles bringing cargo and personnel aloft.

And once the Moon was conquered by 1977, von Braun already had Mars in his sights with another fleet of manned ships to explore the Red Planet. Not only did this series provide material for books, but it was the basis for three color television documentaries on space travel for Walt Disney in 1955 and 1957 that featured von Braun and many of the other authors.

In addition to the sketches that von Braun provided for the artists, the archive also contains cover letters, detailed orbital calculations and graphs, and various other notes that outline his vision for the space station, the shuttle, the moonship, moon transport, and a miniature satellite that would act as a pathfinder for all the other missions.

Along with the von Braun archive, the Space and Aviation Auction also features an American flag flown on the Apollo 10 mission, Buzz Aldrin's star chart flown on Apollo 11, a Lunar Rover map used by Gene Cernan on Apollo 17, a urine collection system for an Apollo spacesuit, a spacesuit glove worn by Neil Armstrong, and a Space Shuttle external nose cone assembly.