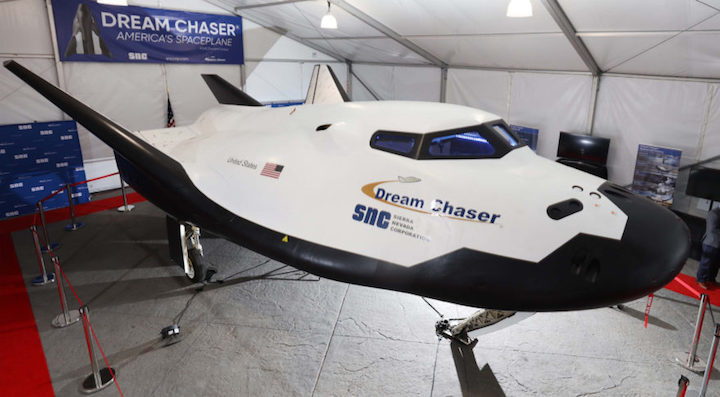 COLORADO SPRINGS — As Sierra Nevada Corporation (SNC) prepares its Dream Chaser cargo vehicle for a first launch on an Atlas 5 in late 2020, the company expects to make a decision by the end of this year on the rocket that will launch later missions.

At a briefing during the 34th Space Symposium here April 18, company officials said development of the cargo version of Dream Chaser is on schedule for a first launch in the fourth quarter of 2020. That mission, the first of at least six missions to the International Space Station under a NASA Commercial Resupply Services 2 contract awarded in January 2016, will launch on a United Launch Alliance Atlas 5.

“It is a very well proven rocket. We have a long relationship with United Launch Alliance,” said Mark Sirangelo, executive vice president for SNC Space Systems. “We think it is a good way to start.”

SNC announced a contract with ULA in July 2017 that covered two Dream Chaser launches, in 2020 and 2021. Both would use the Atlas 5 552, the largest version of the Atlas 5 with a five-meter payload fairing, five solid rocket boosters and a dual-engine Centaur upper stage.

However, Sirangelo said the company was looking at other options for launching the second and later Dream Chaser ISS cargo missions. “It’s a quite interesting time in the launch business, where we see all the major launch companies coming out with a new launch system,” he said. “We are looking at all of the launch systems.”

Sirangelo said later that the company issued a request for proposals for multiple Dream Chaser launches. “We’ll probably be making a decision by the end of this year,” he said. “We’re gotten tremendous response for it.” He declined to discuss specific vehicles under consideration but said SNC received “really great response from all the major providers.”

He noted that there are no requirements under its NASA contract that require those cargo missions to fly on U.S. vehicles, citing NASA’s use of European and Japanese cargo vehicles to resupply the ISS. “We think it’s certainly feasible,” he said, adding that there was interest in launching Dream Chaser on vehicles outside the U.S.

Production of the first vehicle will soon start, even as the CDR is still being finalized. “The first parts of our primary structure are arriving next month,” he said. “We’re marching along really well with that.”

SNC held the briefing in front of the Dream Chaser engineering test article that performed a glide flight at Edwards Air Force Base in California in November. That test article, developed under earlier NASA commercial crew awards, will now be placed in “flyable storage” at the company’s Colorado facilities.

Lindsey said the company will likely keep the test article in storage until the company is ready to resume development of a crewed version of Dream Chaser. “We’re going to keep it in a condition ready to fly,” he said. “We’ll modify it for flying crew, put a pilot in there and do some testing in the future.”