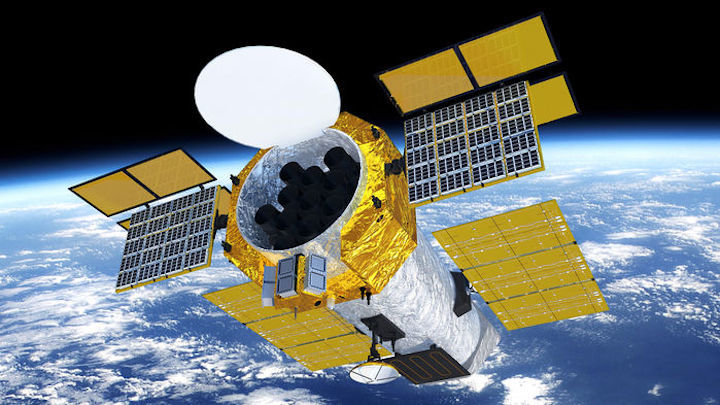 The enhanced X-Ray Timing and Polarimetry mission, planned for launch around 2025, would probe x-rays from violent, fast-changing cosmic events.

China is raising the stakes in its bid to become a major player in space science. At a kick-off meeting in Beijing last week, China's National Space Science Center, part of the Chinese Academy of Sciences (CAS), began detailed design studies for a satellite that would round out an array of orbiting platforms for probing x-rays from the most violent corners of the cosmos.

The enhanced X-Ray Timing and Polarimetry (eXTP) mission would be China's most ambitious space science satellite yet—and its most expensive, with an estimated price tag of $473 million. To pull it off, China is assembling a collaboration involving more than 200 scientists so far from dozens of institutions in 20 countries. If the eXTP mission passes a final review next year, it would launch around 2025.

Chinese scientists "are becoming leaders in the field of x-ray astrophysics," says Andrea Santangelo, an astrophysicist at the University of Tübingen in Germany and eXTP's international coordinator. Last year, the National Space Science Center launched the Hard X-ray Modulation Telescope, which is observing high-energy objects such as black holes and neutron stars. As early as 2021 it will be joined by the Einstein Probe, a wide-field x-ray sentinel for transient phenomena such as gamma ray bursts and the titanic collisions of neutron stars or black holes that generate gravitational waves. "For years we have used data from U.S. and European missions," says eXTP Project Manager Lu Fangjun, an astrophysicist at the CAS Institute of High Energy Physics in Beijing. Now, he says, "We want to contribute [observational data] to the international community."

The eXTP mission would fill a unique niche in x-ray astronomy. Two pioneering x-ray telescopes launched in 1999, NASA's Chandra X-ray Observatory and Europe's XMM-Newton, capture x-rays from the distant universe, gleaning clues to the formation and evolution of stars and galaxies. eXTP will probe neutron stars and black holes closer to home and monitor how they and their environments change on short timescales. "The goal is to study fundamental physics in the most extreme conditions in terms of density of matter, magnetic fields and gravity that you cannot reproduce in labs," Santangelo says.

eXTP would be able to collect more photons at a wider range of energies than previous telescopes. Three of its instruments would simultaneously measure energy spectra and polarization of x-rays from cosmic sources, and track how emissions change over microseconds to milliseconds as objects pulsate or rotate. "This powerful payload is absolutely unique," Santangelo says. Paul Ray of the U.S. Naval Research Laboratory in Washington, D.C., principal investigator of a similar proposed mission called STROBE-X, says: “Recent advances in solid-state x-ray detector technologies have been incorporated into several mission concepts including … STROBE-X and eXTP. … These new instruments will be critical in the era of time domain astronomy.”

Such data would provide clues to how matter behaves when compressed to the extreme densities thought to exist in the cores of neutron stars, and could reveal whether the stars really are made of neutrons or whether the particles have disintegrated into their constituent quarks or other exotic states. eXTP could also measure how matter behaves in the strong gravity close to black holes. Albert Einstein's general theory of relativity, which describes gravity, makes predictions, but these have never been tested under such extreme conditions. And eXTP's suite of instruments would look for evidence to support predictions about how light and matter interact in the powerful magnetic fields associated with certain neutron stars.

The eXTP Wide Field Monitor, in the meantime, would observe a large swath of sky for flashes of x-rays from transient events, for example from merging black holes and neutron stars. Other eXTP instruments, as well as visible light and gravitational wave observatories on the ground, could then train their sights on the object of interest.

Europe and China had each contemplated going it alone on a next-generation x-ray satellite before opting to team up. A European consortium has pledged to build two of the satellite's four scientific instruments. And European and Chinese scientists will provide electronics and detectors for each other's instruments. Europe could ante up further hardware or even funding if the European Space Agency (ESA) comes in on the project, which Santangelo calls "desirable and probable."

eXTP will be "a flagship mission for astrophysics" until other observatories come online, Santangelo says. These include ESA's Advanced Telescope for High-Energy Astrophysics, which, if given a final go-ahead, could be launched around 2028.

Ray and his colleagues are working on a science case and design for STROBE-X which will then be assessed by the decadal survey for astrophysics in 2020. It has similar aims as eXTP, but could have up to twice the budget. "eXTP will get good estimates of the radii of a few neutron stars, but really mapping out the parameter space nature provides will require STROBE-X," says team member Thomas Maccarone of Texas Tech University in Lubbock. A handful of U.S.-based scientists are helping define eXTP's science objectives and will likely analyze data, which Lu expects to share openly.