Nuclear-powered spacecraft would cut travel time to the Red Planet

In the race to land humans on Mars, NASA is blowing the cobwebs off a technology it shelved in the 1970s — nuclear-powered rockets.

Last year, NASA partnered with BWXT Nuclear Energy Inc. for an $18.8 million contract to design a reactor and develop fuel for use in a nuclear-thermal propulsion engine for deep-space travel. While that small start is a long way from the the heady days of the Space Race of the Cold War, it marks the U.S. return to an idea that is also being pursued by Russia and China. 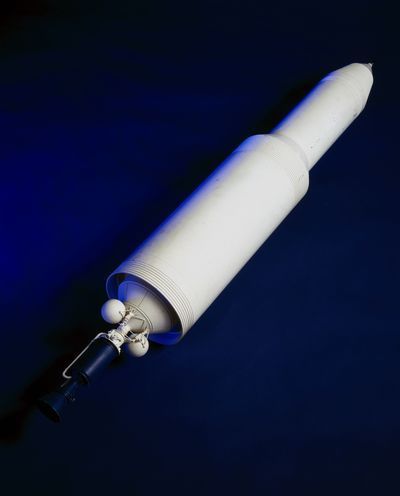 A model of a nuclear-powered rocket that uses fission to generate propulsion.
Photographer: Science & Society Picture Library via Getty Images
-

Unlike conventional rockets that burn fuel to create thrust, the atomic system uses the reactor to heat a propellant like liquid hydrogen, which then expands through a nozzle to power the craft.

That doubles the efficiency at which the rocket uses fuel, allowing for a “drastically smaller” craft and shorter transit time, said Stephen Heister, a professor at Purdue University’s School of Aeronautics and Astronautics. “This factor is absolutely huge, especially for very difficult missions that necessitate a lot of propellant such as a Mars flight.”

While the system would be a niche market in the global nuclear industry, it could be highly lucrative for the company that cracks the technology, especially for nations like the U.S., where the atomic energy sector has been in the doldrums for decades.

“The application of BWXT capabilities for manufacturing systems for space applications is a modest but extremely important area of technical development,” said Jonathan Cirtain, vice president for advanced technology programs at BWXT. “The size of the market is directly tied to how easily these systems can be manufactured and how these in-space nuclear power systems for either electrical or propulsive power compare to alternative sources.”

In the U.S., Europe and Japan, tighter regulations, construction delays, public mistrust and political opposition stalled nuclear power development and helped push industry pioneers like Westinghouse Electric Co. into bankruptcy. And countries like Germany, South Korea and Taiwan are looking to renewable energy or cheap natural gas instead, leaving China and Russia to take the lead in the development of new nuclear plants.

Read More: Why Trump and Musk Are Looking Toward the Moon and Mars

Russia’s Rosatom Corp. has said it plans this year to test a prototype nuclear engine for a spacecraft that can go to Mars. Russia so far has led research in the field and has deployed more than 30 fission reactors in space, according to the World Nuclear Association. China aims to use atomic-powered shuttles as part of its space exploration plans through 2045, according to state Xinhua News Agency.

NASA faces competition in the race to Mars from industrialists like Elon Musk, who have also vowed to get people to the red planet. Space Exploration Technologies Corp., founded by Musk, is developing a liquid oxygen and methane fueled engine. Jeff Bezos’ Blue Origin is testing an engine that uses liquid oxygen and liquefied natural gas. 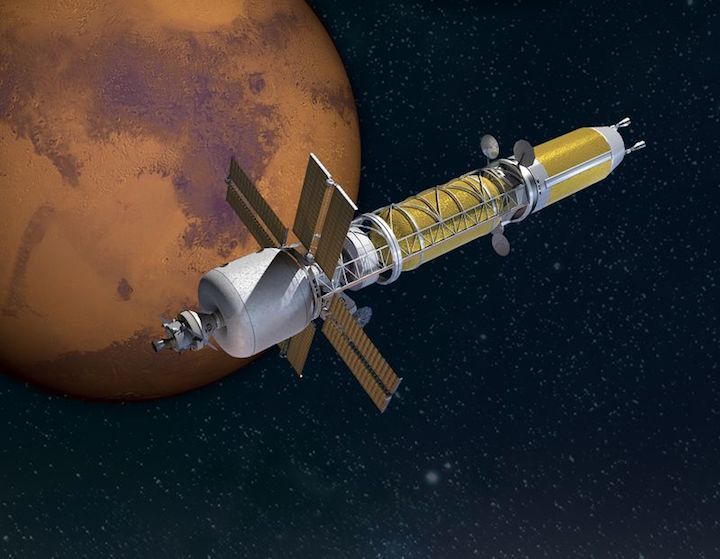 For BWXT, the NASA contract is the latest in its long pedigree in the industry. The company is an offshoot of Babcock & Wilcox, which designed and built some of the world’s first nuclear reactors and atomic-powered submarines, and has worked on feasibility studies for nuclear propulsion systems in space with different U.S. agencies over the past few decades. Its latest contract runs through September 2019.

“Significant advances in material research and technology development have allowed for new materials to be considered for the critical components of the reactor,” said BWXT’s Cirtain. 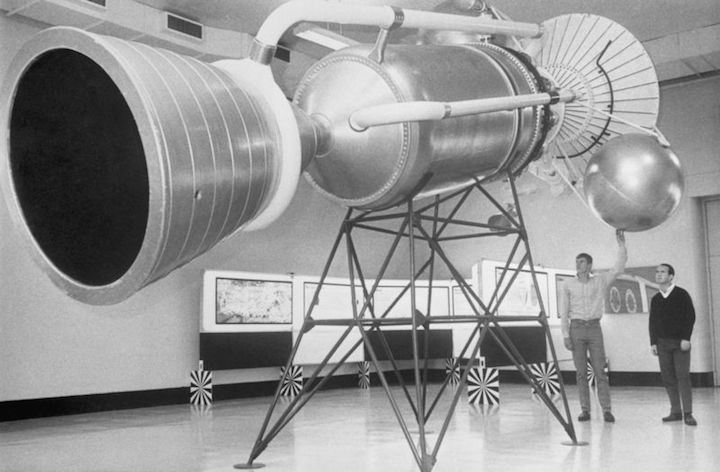 A nuclear propulsion system can provide the flexibility to abort and return even a few months into a mission, said Jeffrey Sheehy, chief engineer of the Space Technology Mission Directorate at NASA. “The novelty of the reactor design limits the amount of nuclear fuel required to execute a propulsion maneuver. It would be possible to restart that engine multiple times,” he said.

While the crew would have to be shielded from the reactor’s radiation, the higher speed of a nuclear-powered craft would cut the time astronauts are exposed to cosmic radiation, according to Purdue’s Heister.

Nuclear propulsion may be the favored option for deep space travel, but the intricacies of the technology and the testing mean that development costs could be a major barrier, said Claudio Bruno, a professor at the University of Connecticut. Using technology developed by NASA decades ago could help speed up the process, he said.

Getting to Mars is no small task — it requires a 55 million-kilometer (34 million-mile) space flight, more than 100 times the distance from Earth to the Moon. NASA probably won’t send humans to orbit the planet until at least the early 2030s.

Ground testing would require a costly system that captures and scrubs exhaust to remove tiny radioactive materials, according to Purdue University’s Heister.

“Space exploration is a captivating passion that many folks have – they are not necessarily motivated by profit,” said Heister. “In our business, we joke that the best way to become a millionaire in the space propulsion industry is to start out as a billionaire.”